Roland Benschneider (born 22 August 1980 in Neuruppin) is a German former footballer, who currently is working at FC Energie Cottbus as sports director. [1]

Neuruppin is a town in Brandenburg, Germany, the administrative seat of Ostprignitz-Ruppin district. It is the birthplace of the novelist Theodor Fontane (1819–1898) and therefore also referred to as Fontanestadt. A garrison town since 1688 and largely rebuilt in a Neoclassical style after a devastating fire in 1787, Neuruppin has the reputation of being "the most Prussian of all Prussian towns".

Born in Neuruppin, [2] Benschneider honed his craft as a defender with FC Neubrandenburg and FC Energie Cottbus. In the 2000–01 season he switched to the Regionalliga Nord and played for Tennis Borussia Berlin.

1. FC Neubrandenburg 04 is a German football club based in Neubrandenburg, Mecklenburg-Vorpommern, currently playing in the NOFV-Oberliga Nord (V).

FC Energie Cottbus is a German football club based in Cottbus, Brandenburg. It was founded in 1963 as SC Cottbus in what was East Germany. After the reunification of Germany, Energie played six seasons in the third tier of the German football league system before floating between the 2. Bundesliga and Bundesliga for 17 years between 1997 and 2014. From 2014 to 2016, the club played in the third tier, 3. Liga, and were then relegated to the Regionalliga Nordost. In 2018, they were promoted back into the 3. Liga.

Only one year into his stint at Borussia, the player, who grew greatly in confidence during this period, moved to SV Eintracht Trier 05 in the Southern Regional League, where by 2002–03 he was to become a fully-fledged squad player. 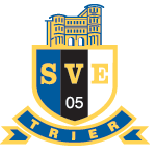 SV Eintracht Trier 05 is a German association football club based in Trier, Rhineland-Palatinate. It was formed on 11 March 1948 out of the merger of Westmark 05 Trier and Eintracht Trier 06, on the 43rd anniversary of the establishment of predecessor Trier Fußball Club 05. The team badge incorporates Trier's most famous landmark, the Porta Nigra, an ancient Roman city gate still standing in Germany's oldest city.

In the next season he moved to Arminia Bielefeld, whose league position he helped to boost in the subsequent weeks and months. Uwe Rapolder was to notice the player, and he joined 1. FC Köln for €200,000. However, in the opening season Benschneider played only twelve full games. In the 2005–06 season he played mainly as a substitute once again, and scored his first goal against FC Schalke 04.

DSC Arminia Bielefeld is a German sports club from Bielefeld, North Rhine-Westphalia. Arminia offers the sports of football, field hockey, figure skating and cue sports. The club has 12,000 members and the club colours are black, white and blue. Arminia's name derives from the Cheruscan chieftain Arminius, who defeated a Roman army in the Battle of the Teutoburg Forest.

Uwe Rapolder is a retired German football player and manager.

1. Fußball-Club Köln 01/07 e. V., commonly known as simply 1. FC Köln or FC Cologne in English, is a German association football club based in Cologne. It was formed in 1948 as a merger of the clubs Kölner Ballspiel-Club 1901 and SpVgg Sülz 07. Köln formerly played in the Bundesliga, however were relegated to 2. Bundesliga after the 2017–18 season.

In September 2011, Benschneider was hired as team manager at SV Elversberg. He had different roles in the club, and he ended his time in the club in 2014 as sports director. [3]

In April 2014, Benschneider joined FC Energie Cottbus where he got the job as sports director. [4] He signed a contract until 2016. 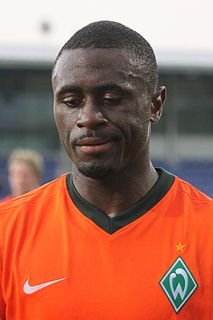 Boubacar Sanogo is an Ivorian footballer who plays as a forward.

Dimitar Rangelov is a Bulgarian footballer who plays as a forward for Energie Cottbus.

The 2005–06 DFB-Pokal was the 63rd season of the annual German football cup competition. Sixty-four teams competed in the tournament of six rounds which began on 19 August 2005 and ended on 29 April 2006. In the final, Bayern Munich defeated Eintracht Frankfurt 1–0, thereby claiming their 13th title and also winning the double. It was the first time in German football that a team won the double two seasons in a row.

Nazif Hajdarović is a Bosnian-Herzegovinian footballer who plays as a striker for Borussia Neunkirchen.

The 2010–11 DFB-Pokal was the 68th season of the annual German football cup competition. The competition began on 13 August 2010 with the first round and concluded on 21 May 2011 with the final at the Olympiastadion in Berlin. The competition was won by Schalke 04, who thus qualified for the play-off round of the 2011–12 UEFA Europa League.

The 2010–11 SC Freiburg season is the club's 13th season in the Bundesliga, the highest division in German football, and the second consecutive season since promotion in 2009. It is the club's fourth season with Robin Dutt as manager.
The season began on 28 June with a first training session.

Andreas Haas is a German footballer who plays as a striker for Borussia Neunkirchen.

Benjamin Förster is a German footballer who plays as a striker for Energie Cottbus.

Martin Kobylański is a German-born Polish professional footballer who plays as a striker for Preußen Münster.

The 1998–99 season was the eighth time Tennis Borussia Berlin played in the 2. Fußball-Bundesliga, the second highest tier of the German football league system. After 34 league games, Tennis Borussia finished 6th. The club had a long run in the DFB-Pokal; making it to the quarter-finals where they lost 2–1 after extra time away to SV Werder Bremen. Ilija Aračić scored eight of the club's 47 league goals before his mid-season move to local rivals Hertha BSC.

The 1999–2000 season was the ninth time Tennis Borussia Berlin played in the 2. Bundesliga, the second highest tier of the German football league system. After 34 league games, Tennis Borussia finished 13th. Saša Ćirić scored 14 of the club's 42 league goals. However, ten days following the last round of league games, the German Football Association revoked TeBe's license for the following season, and as a result, the club were relegated instead of the Stuttgarter Kickers. The club made it to the third round of the DFB-Pokal where they lost 3–2 after extra time to Hertha BSC. The club's reserve team, Tennis Borussia Berlin (Amateure), won the Berliner Landespokal, beating Berliner FC Dynamo 2–0 in the final at the Friedrich-Ludwig-Jahn-Sportpark.

The 2012–13 FC Energie Cottbus season is the 48th season in the club's football history. In 2012–13 the club plays in the 2. Fußball-Bundesliga, the second tier of German football. It is the clubs fourth consecutive season in this league, having played at this level since 2009–10, after it was relegated from the Fußball-Bundesliga in 2009.

Frank Lehmann is a German footballer who plays for SV Elversberg. 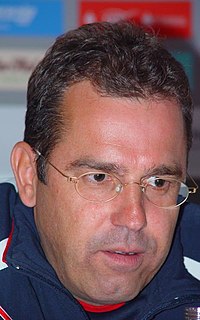