Jon Brittain is a playwright, comedy writer and director who was born in Chester in the northwest of England and grew up in the Netherlands. 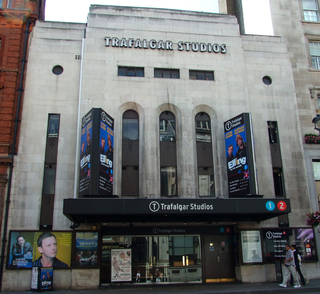 Trafalgar Studios, formerly the Whitehall Theatre until 2004, is a West End theatre in Whitehall, near Trafalgar Square, in the City of Westminster, London.

It was named Outstanding Achievement in an Affiliate Theatre at the 2017 Olivier Awards. [5] [6]

The Laurence Olivier Award for Outstanding Achievement in an Affiliate Theatre is an annual award presented by The Society of London Theatre in recognition of achievements in commercial British theatre. The awards were established as the Society of West End Theatre Awards in 1976, and, renamed in 1984 in honour of English actor Lord Olivier.

The 2017 Laurence Olivier Awards were held on 9 April 2017 at the Royal Albert Hall, London. The ceremony was hosted by comedian Jason Manford. A highlights show was shown on ITV shortly after the live event ended.

The National Youth Theatre of Great Britain is a registered charity in London. It is committed to the development of young people through the medium of creative arts, and aims to use theatre to aid in this objective. It was founded in 1956 as the world's first youth theatre, and has built a reputation for producing actors such as Daniel Craig, Daniel Day-Lewis, Timothy Dalton, Chiwetel Ejiofor, Colin Firth, Ian McShane, Helen Mirren, and Rosamund Pike.

Jermyn Street Theatre is a performance venue situated on Jermyn Street, in London’s West End. It is an off-west end studio theatre. 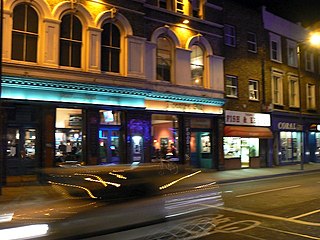 Theatre503, formerly the Latchmere Theatre, is a theatre located at 503 Battersea Park Road in Battersea in the London Borough of Wandsworth, above the Latchmere pub. The venue is known for promoting the work of new writers. 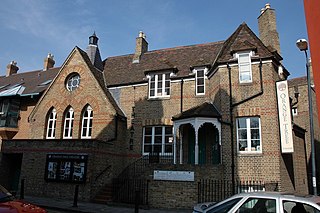 The Orange Tree Theatre is a 180-seat theatre at 1 Clarence Street, Richmond in south-west London, which was built specifically as a theatre in the round. It is housed within a disused 1867 primary school, built in Victorian Gothic style. 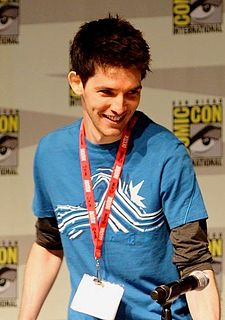 Colin Morgan is an actor from Northern Ireland, best known for playing the title character in the BBC fantasy series Merlin.

Park Theatre is a theatre in Finsbury Park, north London. It opened in 2013 and describes itself as "a neighbourhood theatre with global ambition", offering a mixed programme of new writing, classics, and revivals. As well as the main auditorium seating 200, the building includes a 90-seat studio theatre, a rehearsal space and a Café Bar.

Denise Gough is an Irish actress. She was born in Ennis, County Clare and is the elder sister of the actress Kelly Gough. She is notable for her work in theatre and television, including the play The Painter (2011) and Messiah V: The Rapture. Gough is a two time Olivier Award winner.

James Charles Dacre, is a British theatre director. He has been artistic director of Royal & Derngate Theatres in Northampton since 2013.

Anna Fleischle is a theatre designer who has worked in theatre, dance and opera.

Handbagged is a play by the British playwright Moira Buffini, examining the relationship between Elizabeth II of the United Kingdom and Margaret Thatcher, the British prime minister from 1979 to 1990. It originated in 2010 as a one act play, with the younger Thatcher played by Claire Cox and the elder by Stella Gonet, as part of the Tricycle Theatre's Women, Power and Politics festival. The title derives from the verb coined early in Margaret Thatcher’s term to evoke the effects emanating from her personal handbag as it became an emphatic political prop and visible symbol of her power.

King Charles III is a 2014 play in blank verse by Mike Bartlett. It was premiered at the Almeida Theatre, London, in April 2014 and centres on the accession and reign of King Charles III of the United Kingdom, the possible regnal name of the real Charles, Prince of Wales, and the limiting of the freedom of the press after the News International phone hacking scandal.

Clare Lizzimore is an award winning British theatre director and writer. Her production of 'Bull' by Mike Bartlett, won 'Outstanding Achievement in an Affiliate Theatre' at the 2015 Olivier Awards. Lizzimore has been resident director at the Citizens Theatre, Glasgow, and staff director at the Royal National Theatre. 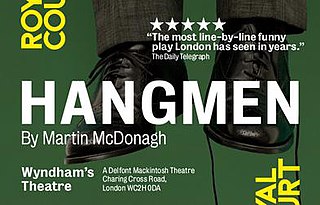 Hangmen is a play by the British-Irish playwright Martin McDonagh. It received its world premiere at the Royal Court Theatre, London, in September 2015, before transferring to the West End's Wyndham's Theatre. The play was directed by Matthew Dunster, designed by Anna Fleischle, and featured David Morrissey and Reece Shearsmith among others. It was universally acclaimed by theatre critics, and was nominated for numerous awards including the Olivier Awards, Critics' Circle Theatre Awards and the Evening Standard Theatre Awards. For its U.S. premiere in 2018 at Off-Broadway's Atlantic Theater Company, Hangmen won the New York Drama Critics' Circle Award for Best Foreign Play. 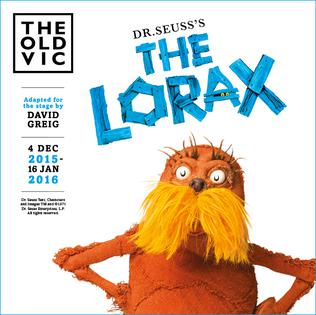 The Lorax is a stage adaptation of the children's novel of the same name by Dr. Seuss, adapted by David Greig featuring songs by Charlie Fink.

John Dagleish is a British actor known for his work in theatre.

The Inheritance is a play by Matthew Lopez that is inspired by the novel Howards End by E. M. Forster. The play premiered in London at the Young Vic in March 2018. Its success led to a production on Broadway.