The 2017 Laurence Olivier Awards were held on 9 April 2017 at the Royal Albert Hall, London. The ceremony was hosted by comedian Jason Manford. [1] A highlights show was shown on ITV shortly after the live event ended.

Any new production that opened between 17 February 2016 and 21 February 2017 in a theatre represented in membership of the Society of London Theatre was eligible for consideration, provided it had performed at least 30 performances. [2]

Productions with multiple wins and nominations

Harry Potter and the Cursed Child broke the record for winning the most awards by a single production, overtaking Matilda (2012) and The Curious Incident of the Dog in the Night-Time (2013) both winning seven.

The following 18 productions, including one opera and two dances, received multiple nominations:

Harry Potter and the Cursed Child tied for most nominations by a single production with Hairspray at the 2008 ceremony.

Sir Colin Nigel Callender is an English television, film and theater producer. He is the CEO at Playground Entertainment, a production company with offices in New York and London. 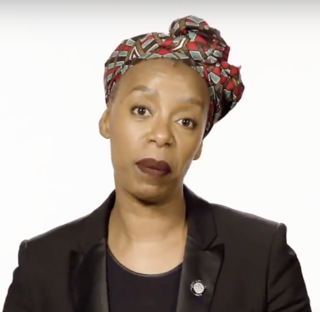 John Richard Tiffany is an English theatre director. He directed the internationally successful productions Harry Potter and the Cursed Child, Black Watch and Once. He has won 2 Tony Awards, an Olivier Award, a Drama Desk Award and an Obie Award.

Steven Hoggett is a British choreographer and movement director. He has won an Olivier Award as well as an Obie Award, has been nominated four times for a Drama Desk Award and three times for a Tony Award.

Groundhog Day is a musical comedy with music and lyrics by Tim Minchin, and book by Danny Rubin. Based on the 1993 film of the same name, from an original story by Rubin, screenplay by Rubin and Harold Ramis, the musical made its world premiere at The Old Vic in London in summer 2016 and opened at the August Wilson Theatre on Broadway on 17 April 2017. The plot centres around Phil Connors, an arrogant Pittsburgh TV weatherman who, during an assignment covering the annual Groundhog Day event in Punxsutawney, Pennsylvania, finds himself in a time loop, repeating the same day again and again. 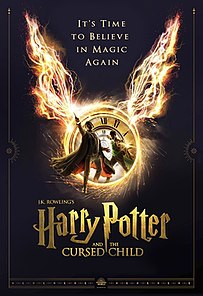 Harry Potter and the Cursed Child is a 2016 British two-part play written by Jack Thorne based on an original story by J. K. Rowling, John Tiffany, and Thorne. Previews of the play began at the Palace Theatre, London, on 7 June 2016, and it premiered on 30 July 2016. The play opened on Broadway on 22 April 2018 at the Lyric Theatre, with previews starting on 16 March 2018. Its cast is similar to that of the first year in the West End, with returning actors Anthony Boyle, Sam Clemmett, Noma Dumezweni, Poppy Miller, Jamie Parker, Alex Price, and Paul Thornley.

Playground Entertainment is a television, film and theatre production company with offices in New York and London, founded in 2012 by Sir Colin Callender, former President of HBO Films.

Anthony Boyle is a Northern Irish actor best known for his role as Scorpius Malfoy in the English play Harry Potter and the Cursed Child (2016), for which he won the Olivier Award for Best Actor in a Supporting Role. In spring of 2018, Boyle made his Broadway debut in the West End transfer of Harry Potter and the Cursed Child at the Lyric Theatre, New York City, and was nominated for Best Featured Actor in a Play at the 72nd Tony Awards.

Calendar Girls is a musical with music and lyrics by Gary Barlow and a book by Tim Firth. The musical is based on the 2003 film Calendar Girls, which is in turn based on a true story.

Tyrone Huntley is a British actor, best known for his work in musical theatre. 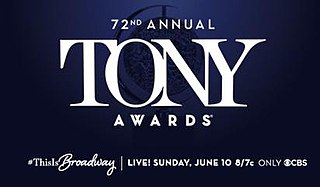 The 2018 Laurence Olivier Awards was held on 8 April 2018 at the Royal Albert Hall, London. The ceremony was hosted by comedian and actress Catherine Tate.

The 2019 Laurence Olivier Awards was held on 7 April 2019 at the Royal Albert Hall. The ceremony was hosted by Jason Manford.

The 2020 Laurence Olivier Awards was held on 25 October 2020 at the London Palladium and hosted by Jason Manford.