Saint Vincent and the Grenadines, also frequently known simply as Saint Vincent, is an English-speaking Caribbean country of several islands in the Lesser Antilles island arc, in the southeast Windward Islands, which lies in the West Indies at the southern end of the eastern border of the Caribbean Sea where the latter meets the Atlantic Ocean. 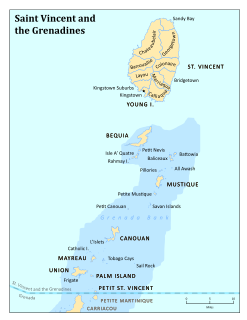 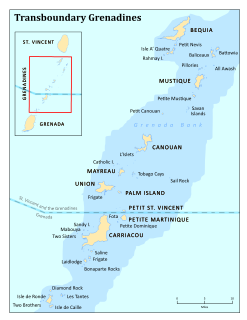 The Grenadines are a chain of small islands that lie on a line between the larger islands of Saint Vincent and Grenada in the Lesser Antilles. Nine are inhabited and open to the public : Bequia, Mustique, Canouan, Union Island, Petit St Vincent, Palm Island and Mayreau, all in Saint Vincent and the Grenadines, plus Petite Martinique and Carriacou in Grenada. Several additional privately-owned islands such as Calivigny are also inhabited. Notable uninhabited islands of the Grenadines include Petit Nevis, used by whalers, and Petit Mustique, which was the centre of a prominent real estate scam in the early 2000s.

The flag of Saint Vincent and the Grenadines is a Canadian pale triband consisting of blue, gold, and green bands charged with three green diamonds at the centre. Adopted in 1985 to replace a similar design used from the time of independence, it has been the flag of Saint Vincent since that year. The design of the present flag entailed substituting the country's coat of arms on a breadfruit leaf with the diamonds. They are a reference to both the letter "V", which is the first letter of the country's name, and its nickname as the "Gems of the Antilles" and "Jewels of the Caribbean". Accordingly, the flag itself has been given the moniker of "The Gems".

Wesley Julian John is a footballer from Saint Vincent and the Grenadines who plays for Central FC of the TT Pro League as a defender.

The following outline is provided as an overview of and topical guide to Saint Vincent and the Grenadines:

Most of the foreign nationals visiting Saint Vincent and the Grenadines are granted visa free access. 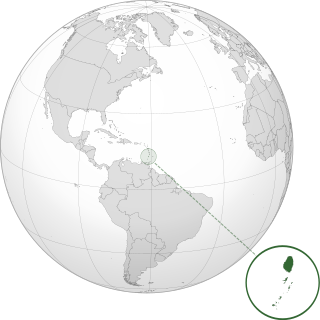