Scuffy is a toy tugboat who wishes for "bigger things" than sailing in the bathtub. The Man with the Polkadot Tie (who owns a toy store) and his son take Scuffy to a small brook in a pasture, and soon the current carries him away. At first Scuffy is pleased. The brook grows into a stream which turns into a small river and finally a larger river. Scuffy is overwhelmed by the sheer size of things around him. As he is just about to sail off into the endless ocean, he is rescued by the man and his boy and returned to the bathtub where Scuffy is now content to remain.

Bagpuss is a British animated children's television series which was made by Peter Firmin and Oliver Postgate through their company Smallfilms. The series of thirteen episodes was first broadcast from Tuesday 12 February to Tuesday 7 May 1974. The title character was "a saggy, old cloth cat, baggy, and a bit loose at the seams". Although only thirteen episodes were produced and broadcast, the programme remains fondly remembered, and was frequently repeated in the UK until 1986. In early 1999, Bagpuss topped a BBC poll for the UK's favourite children's television programme.

A picture book combines visual and verbal narratives in a book format, most often aimed at young children. With the narrative told primarily through text, they are distinct from comics, which do so primarily through sequential images. The images in picture books can be produced in a range of media, such as oil paints, acrylics, watercolor, and pencil. Picture books often serve as pedagogical resources, aiding with children's language development or understanding of the world.

Richard McClure Scarry was an American children's author and illustrator who published over 300 books with total sales of over 100 million worldwide. He is best known for his Best Ever book series that take place primarily in the fictional town of Busytown, "which is populated by friendly and helpful resident [animals...such as] Mr. Frumble, Huckle Cat, Mr. Fixit, Lowly Worm, and others..." The series spawned a media franchise.

A tugboat or tug is a marine vessel that manoeuvres other vessels by pushing or pulling them, with direct contact or a tow line. These boats typically tug ships that cannot move well on their own, such as those in crowded harbours or narrow canals, or those that cannot move at all, such as barges, disabled ships, log rafts, or oil platforms. Some are ocean-going, some are icebreakers or salvage tugs. Early models had steam engines, and modern ones have diesel engines. Many have deluge guns, which help in firefighting, especially in harbours. 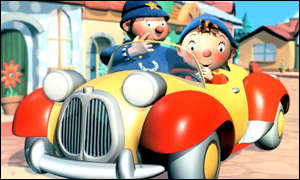 Noddy is a fictional character created by English children's author Enid Blyton. Noddy first appeared in a book series published between 1949 and 1963, illustrated by the Dutch artist Harmsen van der Beek from 1949 until his death in 1953, after which the work was continued by Peter Wienk. Television shows based on the character have run on British television since 1955. 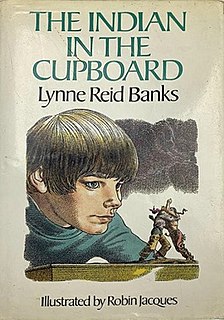 The Indian in the Cupboard is a low fantasy children's novel by the British writer Lynne Reid Banks. It was published in 1980 with illustrations by Robin Jacques (UK) and Brock Cole (US). It was later adapted as a 1995 children's film of the same name. Later books in the series were illustrated by Piers Sanford.

Little Golden Books is a series of children's books, published since 1942.

Gertrude Crampton was an author of children's books, including Tootle (1945) and Scuffy the Tugboat (1946). 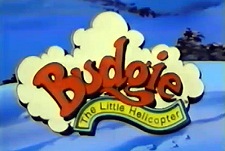 Budgie the Little Helicopter is a British animated television series, relating to a fictional helicopter and his friends, based on a series of children's books. The characters were based on the books by Sarah Ferguson, Duchess of York. The show was coproduced by Fred Wolf Films Dublin, The Sleepy Kids Company and Sarah Ferguson, Duchess of York for ITV Wales & West and Scottish Television Enterprises, and originally aired on British television in 1994 on CITV, where it ran for 39 episodes. A range of videos, books, and toys were released under the Budgie label.

Onion John is a novel by American writer Joseph Krumgold, published in 1959. It was the winner of the 1960 Newbery Medal. The story is set in 1950s New Jersey, and tells the story of 12-year-old Andy Rusch and his friendship with an eccentric hermit who lives on the outskirts of the small town of Serenity.

Theodore Tugboat is a Canadian children's television series about a tugboat named Theodore who lives in the Big Harbour with all of his friends. The show originated in Halifax, Nova Scotia, Canada as a co-production between the CBC, and the now defunct Cochran Entertainment, and was filmed on a model set using radio controlled tugboats, ships, and machinery. Production of the show ended in 2001, and its distribution rights were later sold to Classic Media. The show premiered in Canada on CBC Television, then went to PBS, was on Qubo in the United States, and has appeared in eighty different countries.

Mercer Mayer is an American children's author and illustrator. He has published over 300 books, using a wide range of illustrative styles. Mayer is best known for his Little Critter and Little Monster series of books.

Old Bear and Friends is a popular series of children's books written by British author and illustrator Jane Hissey. The books became the basis for a BAFTA award-winning television series Old Bear Stories.

Muddle Earth is a children's novel by Paul Stewart, published in 2003, and illustrated by Chris Riddell. It is largely a parody of The Lord of the Rings by J. R. R. Tolkien. Like LOTR it is divided into three sections: Englebert the Enormous, Here Be Dragons and Doctor Cuddles of Giggle Glade. In 2011, a sequel titled Muddle Earth Too was published.

Golden Book Video was a line of children/family animated and live-action videos marketed by Western Publishing, beginning in the holiday season of 1985. They featured characters and stories from Western's print publications, such as Little Golden Books, and were originally released on VHS video cassette for under $10.

Saviour Pirotta is a Maltese-born British author and playwright who resides in England. He is mostly known for the bestselling The Orchard Book of First Greek Myths, an adaptation of the Russian folktale, Firebird, and the Ancient Greek Mysteries Series for Bloomsbury. His books are particularly successful in the UK, Greece, Italy and South Korea.

Poky and Friends is a series of animated videos and books produced by Varga TVC Productions and Golden Books Family Entertainment that ran from 1998 until 2003.