The Seabird Colony Register (SCR) is a database, managed by the British Joint Nature Conservation Committee, which contains counts of breeding seabirds at British seabird colonies made between 1969 and 1998, which is used for analysing past changes in breeding seabird numbers and changes in their colony size in Britain and Ireland.

Data included in the SCR include results of two complete seabird censuses of Britain and Ireland: Operation Seafarer (1969/70) and the Seabird Colony Register Census (1985–1987), as well as ad hoc counts and counts from other surveys. Data are held for all 25 species of seabird breeding throughout Britain and Ireland.

The SCR has been partially superseded by the Seabird 2000 database.

A census is the procedure of systematically calculating, acquiring and recording information about the members of a given population. This term is used mostly in connection with national population and housing censuses; other common censuses include the census of agriculture, and other censuses such as the traditional culture, business, supplies, and traffic censuses. The United Nations defines the essential features of population and housing censuses as "individual enumeration, universality within a defined territory, simultaneity and defined periodicity", and recommends that population censuses be taken at least every ten years. United Nations recommendations also cover census topics to be collected, official definitions, classifications and other useful information to co-ordinate international practices.

Kiritimati or Christmas Island is a Pacific Ocean coral atoll in the northern Line Islands. It is part of the Republic of Kiribati. Its Gilbertese name is the rendition of the English word "Christmas" according to its phonology, in which the combination ti is pronounced s, and the name is thus pronounced [kiˈrɪsmæs]. 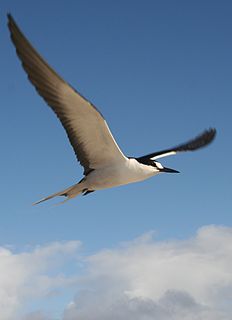 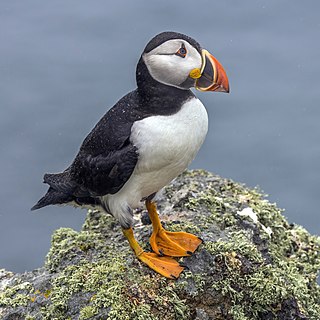 The Atlantic puffin, also known as the common puffin, is a species of seabird in the auk family. It is the only puffin native to the Atlantic Ocean; two related species, the tufted puffin and the horned puffin, are found in the northeastern Pacific. The Atlantic puffin breeds in Québec, Iceland, Norway, Greenland, Newfoundland and Labrador, Nova Scotia and the Faroe Islands, and as far south as Maine in the west and France in the east. The Atlantic Puffin is most commonly found on the Westman Islands, Iceland. Although it has a large population and a wide range, the species has declined rapidly, at least in parts of its range, resulting in it being rated as vulnerable by the IUCN. On land, it has the typical upright stance of an auk. At sea, it swims on the surface and feeds mainly on small fish, which it catches by diving under water, using its wings for propulsion.

The northern gannet is a seabird, the largest species of the gannet family, Sulidae. It is native to the coasts of the Atlantic Ocean, breeding in Western Europe and Northeastern North America. The sexes are similar in appearance. The adult northern gannet has a mainly white streamlined body with a long neck, long and slender wings. It is 87–100 cm (34–39 in) long with a 170–180 cm (67–71 in) wingspan. The head and nape have a buff tinge that is more prominent in breeding season, and the wings are edged with dark brown-black feathers. The long pointed bill is blue-grey, contrasting with black bare skin around the mouth and eyes. Juveniles are mostly grey-brown, becoming increasingly white in the five years it takes them to reach maturity. 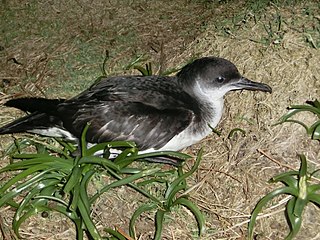 The Manx shearwater is a medium-sized shearwater in the seabird family Procellariidae. The scientific name of this species records a name shift: Manx shearwaters were called Manks puffins in the 17th century. Puffin is an Anglo-Norman word for the cured carcasses of nestling shearwaters. The Atlantic puffin acquired the name much later, possibly because of its similar nesting habits. 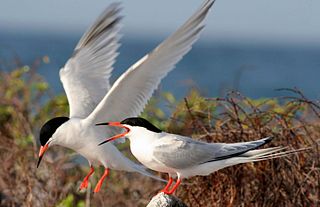 The roseate tern is a tern in the family Laridae. The genus name Sterna is derived from Old English "stearn", "tern", and the specific dougallii refers to Scottish physician and collector Dr Peter McDougall (1777–1814). "Roseate" refers to the bird's pink breast in breeding plumage.

The thick-billed murre or Brünnich's guillemot is a bird in the auk family (Alcidae). This bird is named after the Danish zoologist Morten Thrane Brünnich. The very deeply black North Pacific subspecies Uria lomvia arra is also called Pallas' murre after its describer. The genus name is from Ancient Greek ouria, a waterbird mentioned by Athenaeus. The species term lomvia is a Swedish word for an auk or diver. The English "guillemot" is from French guillemot probably derived from Guillaume, "William". "Murre" is of uncertain origins, but may imitate the call of the common guillemot.

SCR may refer to:

A breeding bird survey monitors the status and trends of bird populations. Data from the survey are an important source for the range maps found in field guides. The North American Breeding Bird Survey is a joint project of the United States Geological Survey (USGS) and the Canadian Wildlife Service. The UK Breeding Bird Survey is administered by the British Trust for Ornithology, the Joint Nature Conservation Committee, and the Royal Society for the Protection of Birds. 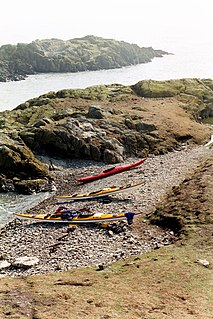 The Skerries are a group of sparsely vegetated rocky islets (skerries), with a total area of about 17 hectares lying 3 kilometres (1.9 mi) offshore from Carmel Head at the northwest corner of Anglesey, Wales. The islands are important as a breeding site for seabirds, and they attract divers, who come to visit the numerous shipwrecks. The Skerries Lighthouse sits atop the highest point in the islands.

Annet is the second largest of the fifty or so uninhabited Isles of Scilly, 1 kilometre (0.62 mi) west of St Agnes with a length of 1 kilometre (0.62 mi) and approximately 22 hectares in area. The low-lying island is almost divided in two by a narrow neck of land at West Porth which can, at times, be covered by waves. At the northern end of the island are the two granite carns of Annet Head and Carn Irish and three smaller carns known as the Haycocks. The rocky outcrops on the southern side of the island, such as South Carn, are smaller. Annet is a bird sanctuary and the main seabird breeding site in Scilly.

Rockabill is a group of two islands, "The Rock" and "The Bill", lying in the western Irish Sea about 6 kilometres east-north-east of Skerries, County Dublin, Ireland. An alternative Irish name, Carraig Dhá Bheola, meaning Two Lips Rock, is probably just a corruption of Carraig Dábhiolla.

There are many field methods available for conducting avian ecological research. They can be divided into three types: counts, nest monitoring, and capturing and marking.

The EBCC Atlas of European Breeding Birds - their distribution and abundance (ISBN 0-85661-091-7) is an ornithological atlas published for the European Bird Census Council by T & A D Poyser in 1997. Its editors were Ward J. M. Hagemeijer and Michael J. Blair. The atlas was the first to present grid-square distribution maps for all breeding birds at a Europe-wide level. The bulk of the book is in English, although it also contains introductions in thirteen other European languages. The atlas presents the results of the European Bird Census Council's European Ornithological Atlas project, the fieldwork for which was carried out between 1985 and 1988. 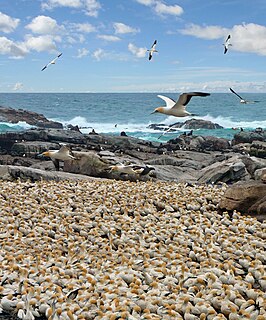 A bird colony is a large congregation of individuals of one or more species of bird that nest or roost in proximity at a particular location. Many kinds of birds are known to congregate in groups of varying size; a congregation of nesting birds is called a breeding colony. Colonial nesting birds include seabirds such as auks and albatrosses; wetland species such as herons; and a few passerines such as weaverbirds, certain blackbirds, and some swallows. A group of birds congregating for rest is called a communal roost. Evidence of colonial nesting has been found in non-neornithine birds (Enantiornithes), in sediments from the Late Cretaceous (Maastrichtian) of Romania. 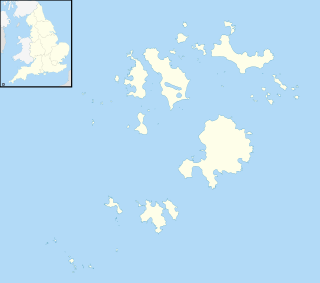 The Western Rocks are a group of uninhabited skerries and rocks in the south–western part of the Isles of Scilly, United Kingdom, and are renowned for the numerous shipwrecks in the area and the nearby Bishop Rock lighthouse. In 1971, the rocks and islands were designated a Site of Special Scientific Interest for their breeding sea birds. Landing on the islands is both difficult and discouraged and there are few published records of visits by naturalists.

Godrevy Head to St Agnes is a coastal Site of Special Scientific Interest (SSSI) in north Cornwall, UK, noted for both its biological and geological characteristics. A number of rare and scarce plant species can be found on the site, along with many breeding seabirds. 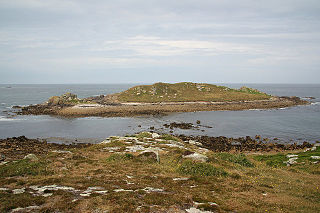 The Norrard (Northern) Rocks are a group of small uninhabited granite rocks in the north–western part of the Isles of Scilly, to the west of Bryher and Samson. In 1971 they were designated as a Site of Special Scientific Interest (SSSI) for their breeding seabird colonies and they are permanently closed to landings from boat passengers. The vegetation on the islands is limited by the extreme exposure and only six species of flowering plants have been recorded.

Sarah Wanless is an animal ecologist in the UK and is an expert on seabirds; she is a Fellow of the Royal Society of Edinburgh and is Honorary Professor at the Universities of Glasgow and Aberdeen.