Serial crimes are crimes of a repetitive nature. Serial murder, serial rape and serial arson are crimes regarded as serial crimes. However, according to criminologists, a habitual offender or a career criminal is not necessarily a serial criminal.[ citation needed ]

A habitual offender, repeat offender, or career criminal is a person convicted of a new crime who was previously convicted of a crime(s). Various state and jurisdictions may have laws targeting habitual offenders, and specifically providing for enhanced or exemplary punishments or other sanctions. They are designed to counter criminal recidivism by physical incapacitation via imprisonment.

Recidivism is the act of a person repeating an undesirable behavior after they have either experienced negative consequences of that behavior, or have been trained to extinguish that behavior. It is also used to refer to the percentage of former prisoners who are rearrested for a similar offense.

A serial killer is typically a person who murders three or more people, usually in service of abnormal psychological gratification, with the murders taking place over more than a month and including a significant period of time between them. Different authorities apply different criteria when designating serial killers. For example, while most authorities set a threshold of three murders, others extend it to four or lessen it to two. The Federal Bureau of Investigation (FBI) defines serial killing as "a series of two or more murders, committed as separate events, usually, but not always, by one offender acting alone".

Geographic profiling is a criminal investigative methodology that analyzes the locations of a connected series of crimes to determine the most probable area of offender residence. By incorporating both qualitative and quantitative methods, it assists in understanding spatial behaviour of an offender and focusing the investigation to a smaller area of the community. Typically used in cases of serial murder or rape, the technique helps police detectives prioritize information in large-scale major crime investigations that often involve hundreds or thousands of suspects and tips.

The Behavioral Analysis Unit (BAU) is a department of the Federal Bureau of Investigation's National Center for the Analysis of Violent Crime (NCAVC) that uses behavioral analysts to assist in criminal investigations. The mission of the NCAVC and the BAU is to provide behavioral based investigative and/or operational support by applying case experience, research, and training to complex and time-sensitive crimes, typically involving acts or threats of violence.

The Special Victims Unit (SVU) is the name of a specialized division within some police departments. The detectives in this division typically investigate crimes involving sexual assault or victims of non-sexual crimes who require specialist handling such as the very young, the very elderly, or the disabled.

Robert Kenneth Ressler was an FBI agent and author. He played a significant role in the psychological profiling of violent offenders in the 1970s and is often credited with coining the term "serial killer." After retiring from the FBI, he authored a number of books on serial murders, and often gave lectures on criminology.

Offender profiling, also known as criminal profiling, is an investigative strategy used by law enforcement agencies to identify likely suspects and has been used by investigators to link cases that may have been committed by the same perpetrator. Multiple crimes may be linked to a specific offender and the profile may be used to predict the identified offender's future actions. In the 1980s, most researchers believed offender profiling was relevant only to sex crimes, like serial rape or sexual homicide, but since the late 1990s research has been published to support its application to arson (1998), and then later terrorism (2000) and burglary (2002)..

The Golden State Killer is a serial killer, rapist, and burglar who committed at least 13 murders, more than 50 rapes, and over 100 burglaries in California from 1974 to 1986. He is believed to be responsible for three crime sprees throughout California, each of which spawned a different nickname in the press before it became evident that they were committed by the same person.

The FBI method of profiling is a system created by the Federal Bureau of Investigation (FBI) used to detect and classify the major personality and behavioral characteristics of an individual based upon analysis of the crime or crimes the person committed. One of the first American profilers was FBI agent John E. Douglas, who was also instrumental in developing the behavioral science method of law enforcement.

A copycat crime is a criminal act that is modeled or inspired by a previous crime.

The Behavioral Science Unit (BSU) no longer exists within the FBI as a unit within the Federal Bureau of Investigation's (FBI) Training Division at Quantico, Virginia. The unit, was usurped by the Critical Incident Response Group (CIRG) and renamed the Behavioral Research and Instruction Unit (BRIU) and currently is called the Behavioral Analysis Unit (5) (BAU-5) within the National Center for Analysis of Violent Crime (NCAVC). The BAU-5 currently works on developing research and then using the evidence-based results to provide training and improve consultation in the behavioral sciences—understanding who criminals are, how they think, why they do what they do—for the FBI and law enforcement communities.

The Macdonald triad is a set of three factors that has been suggested if all three or any combination of two, are present together, to be predictive of or associated with later violent tendencies, particularly with relation to serial offenses. The triad was first proposed by psychiatrist J.M. Macdonald in "The Threat to Kill", a 1963 paper in the American Journal of Psychiatry. Small-scale studies conducted by psychiatrists Daniel Hellman and Nathan Blackman, and then FBI agents John E. Douglas and Robert K. Ressler along with Dr. Ann Burgess, claimed substantial evidence for the association of these childhood patterns with later predatory behavior. Although it remains an influential and widely taught theory, subsequent research has generally not validated this line of thinking. 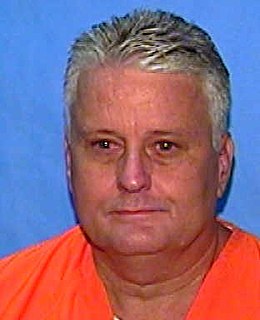 Robert Joseph Long, also known as Bobby Joe Long, was an American serial killer and rapist who was executed for the murder of Michelle Denise Simms. Long abducted, sexually assaulted, and murdered at least 10 women in the Tampa Bay Area in Florida during an eight-month period in 1984. He released one of his last victims, 17-year-old Lisa McVey, after raping her over a period of 26 hours. McVey provided information to the police that enabled them to track him down.

A serial rapist is someone who commits multiple rapes, whether with multiple victims or a single victim repeatedly over a period of time. Some serial rapists target children. The terms sexual predator, repeat rape and multiple offending can also be used to describe the activities of those who commit a number of consecutive rapes, but remain unprosecuted when self-reported in research. Others will commit their assaults in prisons. In some instances, a group of serial rapists will work together. These rapists can have a pattern of behavior that is sometimes used to predict their activities and aid in their arrest and conviction. Serial rapists also differ from one time offenders because "serial rapists more often involved kidnapping, verbally and physically threatening the victims, and using or threatening the use of weapons."

Life imprisonment in South Africa has an indeterminate length and may last for the remainder of the offender's life. It is a mandatory punishment for premeditated murder, gang rape, serial rape and rape where the rapist knew they were HIV positive or if the victim was under 18 and/or mentally disabled. In certain circumstances, robberies and hijackings also carry a mandatory life sentence.

Norman Avzal Simons, also known as the "Station Strangler", is a South African rapist and serial killer who was convicted in 1995 on one count of murder and one count of kidnapping Elroy van Rooy, age 10. He was sentenced to 35 years in prison.

Studies have been made of the "hunting patterns" of serial offenders, mainly serial killers and those committing repeated sex crimes. By hunting patterns are meant the interaction of time, space, and activity of a serial offender's criminal behavior. The attempt is made to ascribe rational motives to the offender's choice of places and times; investigators may invoke routine activity theory and rational choice theory in relation to the location of crimes.