Sheryl Cormier (born March 15, 1945) is an American Cajun accordion musician. She began playing the accordion when she was 7 years old. She is "one of the few women to establish herself in Cajun music" and is the first professional Cajun accordion female musician.

Cormier was a hair stylist before she became a professional musician. [1] She started her own group in 1990 which included her husband Russell singing and her son Russell Jr. playing the drums. The group recorded the album "Queen of Cajun Music" ("La Reine de Musique Cadjine"). [2] She also led an all-female Cajun band. [1] In 1992, she released her second album titled Sheryl Cormier and Cajun Sounds. [1] Throughout the 1990s, Cormier performed in Europe. The Arcadian Museum named her a Living Legend in 2002, [2] and that year it was reported that Cormier released 45 recordings and performed in every major Cajun music festival. [3] Her band, The Cajun Sound, includes her husband and son among others. [4] Cormier had a heart attack in 2004 that kept her from performing for close to a year. In 2005, Cormier and her husband traveled to England for a performance at the Gloucester International Music Festival and throughout Europe. [5]

Cormier is "one of the few women to establish herself in Cajun music" and she is the first professional female Cajun accordion musician. [6] She has been named the Cajun Queen in the United States and Europe. [5] In 1988, she was voted as Female Vocalist of the Year by The Times of Acadiana and she was given the title of Best Contemporary Artist. Her song "Mon Coeur et Mon Armour" won Best Song at the Cajun French Music Awards in 1989 and her band won Best Upcoming Band. Cormier was nominated for a Grammy Award in 1993. In 1997, she was placed in the Cajun Music Hall of Fame. [3]

Cormier was born as Sheryl Guidreau on March 15, 1945 in Grand Coteau, Louisiana. [4] [3] She started playing music when she was 7 years old after taking her father's accordion. Cormier said, "I wanted to play his forbidden musical instrument. For a farmer, the accordion was a prized and costly possession, and the children weren't allowed to touch it. I quickly taught myself to play the Cajun music that I often heard my father and his band play." [4] When she was a teenager, she played the accordion in a group that was led by her parents. [2] 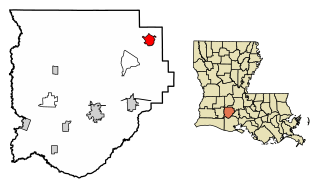 Church Point is a town in Acadia Parish, Louisiana, United States. The population was 4,560 at the 2010 census. It is part of the Crowley Micropolitan Statistical Area. Church Point is known as the Buggy Capital of the World as it used to be host to the annual Buggy Festival which has since gone defunct.

Zydeco is a music genre that evolved in southwest Louisiana by French Creole speakers which blends blues, rhythm and blues, and music indigenous to the Louisiana Creoles and the Native American people of Louisiana. Though distinct in origin from the Cajun music of Louisiana, the two forms influenced each other, forming a complex of genres native to Louisiana.

BeauSoleil is a Cajun band from Louisiana, United States.

Clifton Chenier, a Louisiana French-speaking native of Leonville, Louisiana, near Opelousas, was an eminent performer and recording artist of zydeco, which arose from Cajun and Creole music, with R&B, jazz, and blues influences. He played the accordion and won a Grammy Award in 1983.

Swamp pop is a music genre indigenous to the Acadiana region of south Louisiana and an adjoining section of southeast Texas. Created in the 1950s by young Cajuns and Creoles, it combines New Orleans–style rhythm and blues, country and western, and traditional French Louisiana musical influences. Although a fairly obscure genre, swamp pop maintains a large audience in its south Louisiana and southeast Texas homeland, and it has acquired a small but passionate cult following in the United Kingdom, Northern Europe, and Japan.

Michael Louis Doucet is an American singer-songwriter and musician best known as the founder of the Cajun band BeauSoleil. 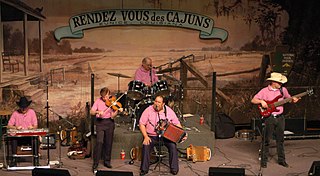 The Sundown Playboys are an American Cajun music band in Louisiana, United States.

Austin Pitre was born in Ville Platte, Louisiana. A Cajun music pioneer, Pitre claimed to be the first musician to play the accordion standing up, rather than sitting down. Along with his band, the Evangeline Playboys, Pitre recorded Cajun dancehall hits such as the Opelousas Waltz.

Nathan Abshire was an American Cajun accordion player. His time in the U.S. Army inspired Abshire to write the crooner song "Service Blues", which the newspaper Daily World reported as "one of his most memorable tearjerkers". After the war, he settled in Basile, Louisiana, where he played regularly at the Avalon Club. He released his best-known record, "Pine Grove Blues", in 1949. Abshire's music became more well-known outside outside of Louisiana at the 1964 Newport Folk Festival. Abshire was never able to write so he was unable to sign autographs, resulting in him having to politely decline the requests. Despite thoughts of Abshire being "arrogant or stuck-up" for not signing autographs, he was unable to read and write. However, Abshire was taught how to write his own signature by Barry Jean Ancelet. Despite receiving more income from music than the majority of Cajun musicians, Abshire was not able to entirely depend on that income to live on. Abshire had multiple jobs during his life and his final job was working as the custodian of the town's dump. Abshire's legacy continued after his death in the form of a museum, a book, and a magazine special issue.

Ann Savoy is a musician, author, and record producer.

Ida Lewis "Queen Ida" Guillory is a Louisiana Creole accordionist. She was the first female accordion player to lead a zydeco band. Queen Ida's music is an eclectic mix of R&B, Caribbean, and Cajun, though the presence of her accordion always keeps it traditional.

Lee Benoit is a Cajun musician from Rayne, Louisiana.

Leo Soileau was one of the most prolific Cajun recording artists of the 1930s and 1940s, recording over 100 songs, which was a substantial amount considering the reluctance to record the music during its early stages. He is known as the second person to record a Cajun record and the first to record this genre with a fiddle. 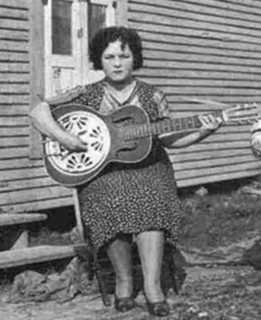 Cléoma Falcon was an American guitarist and vocalist who, along with her husband Joe Falcon, recorded one of the first known examples of Cajun music. The recording, "Allons à Lafayette" was released in 1928, and opened the way for other commercial releases of Cajun music. Aside from being a ground-breaking recording artist, Cleoma Breaux also was one of the few women to perform live, despite the social standards of the era.

Mabel Sonnier Savoie was an American singer and guitar player with roots in Southern Louisiana's country and western and Cajun music scene. She was one of the first solo female recording artists in Louisiana.

Mojo & The Bayou Gypsies is a band led by Mojo from Breaux Bridge Louisiana. Their music is a blend of zydeco, Cajun and their particular style which he calls Red Hot Mojo Music. Circa 2018, they consist of Mojo on vocals and Cajun accordion, Zydeco T Carrier on Frottoir (rubboard), Greg Hirte on Cajun fiddle, Tee John Moser on drums Beau Brian Burke on bass.