Shiro Tsujimura (born Gossei, Japan in 1947) is a Japanese contemporary ceramic artist. [1] New York Times commends his work with the following words: "For a look at some of the most expressive abstract painting around, check out the new ceramics by the Japanese artist Shiro Tsujimura at Koichi Yanagi. Mr. Tsujimura, who was born in 1947 and trained in a Zen temple before becoming a potter, is self-taught, prolific and wide open to all kinds of traditional styles and forms, which he makes entirely his own". [2]

Paul Soldner was an American ceramic artist, noted for his experimentation with the 16th-century Japanese technique called raku, introducing new methods of firing and post firing, which became known as American Raku.

Peter Voulkos was an American artist of Greek descent. He is known for his abstract expressionist ceramic sculptures, which crossed the traditional divide between ceramic crafts and fine art. He established the ceramics department at the Los Angeles County Art Institute and at UC Berkeley. 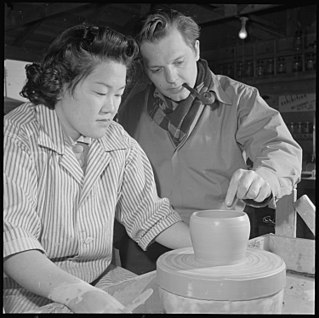 Daniel Rhodes was an American ceramic artist, sculptor, author and educator. During his 25 years (1947–1973) on the faculty at the New York State College of Ceramics at Alfred University, in Alfred, New York, he built an international reputation as a potter, sculptor and authority on studio pottery.

Jun Kaneko is a Japanese ceramic artist living in Omaha, Nebraska, in the United States. His works in clay explore the effects of repeated abstract surface motifs.

Shiro Amano is a Japanese manga artist who has worked on several projects, including his adaptation on the popular Kingdom Hearts series.

Dr. Shin Sang-Ho is an internationally known Korean ceramicist whose works can be found in many museums around the world. He is the former Dean, College of Fine Arts at Hongik University in Seoul, South Korea.

Joan Takayama-Ogawa is a sansei (third-generation) Japanese-American ceramic artist and currently professor at Otis College of Art and Design in Los Angeles, California. Takayama-Ogawa's heritage since the 15th century of Japanese ceramic art influences her work, that usually explores beauty, decoration, ornamentation and narrative while also introducing a dialogue that rejects the traditional role of women in Japanese culture. Her most recent work addresses issues like climate change.

D. Wayne Higby is an American artist working in ceramics.

Steve Heinemann is a Canadian artist working in ceramics.

Adrian Saxe is an American ceramic artist who was born in Glendale, California in 1943. He lives and works in Los Angeles, California.

Tsujimura (辻村) is a Japanese surname. Notable people with the surname include: 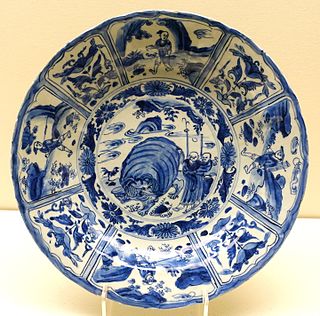 The Oriental Ceramic Society (OCS) is one of the leading international societies for the study and appreciation of Asian art, with a special interest in ceramics. However its wider focus is the study and appreciation of all aspects of oriental art, and over the last 90 years has served as one of the main bodies assisting the understanding of oriental art, and oriental ceramics in particular, by means of organising regular meetings, lectures and publications.

Norm Schulman was an American ceramic artist who lived in Penland, North Carolina. He was born in New York City in 1924. He operated his own studio, Norman Schulman Studio, in Penland.

Edris Eckhardt was an American artist associated with the Cleveland School. She is known for her work in Ceramic art and glass sculpture, her work with the Works Projects Administration's (WPA) Federal Arts Project of Cleveland, and her teaching.

Jack Sures was a Canadian ceramic artist and post-secondary academic.

Bae Bien-u is a South Korean photographer. He is a professor in Seoul Institute of the Arts.

Harris Deller is an American ceramist.

Akihiro Maeta is a Japanese ceramic artist known for white porcelain. He is a Living National Treasure of Japan and a member of the Japan Kōgei Association.