Shorebirds were a short-lived Punk Rock band from Olympia, WA formed in 2007 by Mattie Jo Canino, Chris Bauermeister and Keith Henderson. The band can be considered something of a supergroup due to the band featuring members of Jawbreaker, Latterman and RVIVR.

The band was formed in 2007 following the breakup of Latterman and Mattie Jo Canino's relocation to Olympia, WA. [1] Canino connected with Bauermeister, having moved to Olympia following the demise of Jawbreaker in the late 90s and Keith Henderson, a local drummer. Together they released a self-titled 7" inch and a split with Something's Wrong in 2007. The following year they released their only full length, It's Gonna Get Ugly via Rumbletowne Records before quietly disbanding at the end of 2008. [2] [3] [4]

Canino and Bauermeister would go on to play in the short lived Mutoid Men together (not to be confused with Mutoid Man). Canino would then go on to form the acclaimed RVIVR in 2011 with Bauermeister rejoining temporarily in 2014 to record bass on their Bicker & Breathe EP. Bauermeister would eventually go on to rejoin Jawbreaker in 2017 with a highly successful reunion at Chicago's Riot Fest. [5] [6] 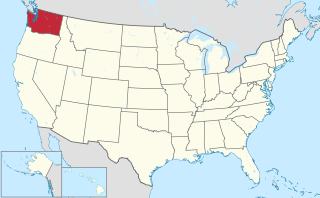 The U.S. state of Washington has been home to many popular musicians and several major hotbeds of musical innovation throughout its history. The largest city in the state, Seattle, is best known for being the birthplace of grunge, a type of rock and roll, during the mid-1980s, as well as a major contributor to the evolution of punk rock, indie music, folk, and hip-hop. Nearby Tacoma and Olympia have also been centers of influence on popular music.

Jawbreaker is an American punk rock band active from 1986 to 1996, and again since 2017. The band is considered one of the most influential acts of the 1990s emo genre. 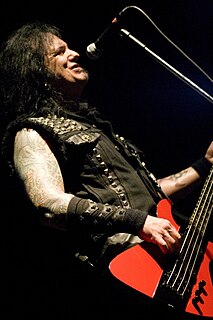 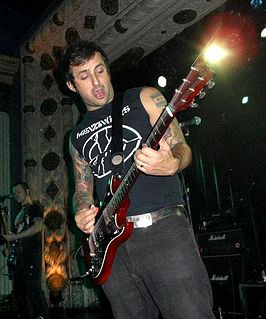 Brendan Kelly is the bassist/vocalist of Chicago-based punk band The Lawrence Arms, as well as guitarist/lead vocalist in The Falcon and Brendan Kelly and the Wandering Birds. Kelly's former bands include Slapstick and The Broadways. He is known for his raspy vocals, drunken demeanor, and onstage witticisms.

Alexander Blake Schwarzenbach is an American musician. He is the singer and guitarist of Jawbreaker, and was previously a member of Jets to Brazil (1997–2003), The Thorns of Life (2008–2009), and Forgetters. Although experiencing little mainstream success himself, Schwarzenbach and groups he has been a member of have influenced a variety of musical groups.

Down by Law is an American punk rock band formed in 1989 by former All frontman Dave Smalley, who is the only remaining original member. The band has recorded seven studio albums. They stayed on Epitaph Records until 1998 and have since switched to other labels. Down by Law has never achieved substantial commercial success, but a number of largely popular acts cite them as influential, and they have an underground following. After several lineup changes, the band went on hiatus from touring and recording in 2003, but resurfaced in 2008 before beginning work on new material and embarking on their first tour in six years in 2009. In 2017, the band reunited their Punkrockacademyfightsong lineup and are currently active and touring.

Latterman is a semi-active four-piece punk rock band from Huntington, New York. A melodic punk rock band with vocals shared by Phil Douglas and Mattie Jo Canino, their songs often contain political and/or socially conscious lyrics. The band is considered highly influential in the Melodic Punk genre with their album No Matter Where We Go... being considered a staple of the genre. Phil Douglas and Mattie Jo Canino respectively would go on to form the equally acclaimed Iron Chic and RVIVR. Canino, Douglas and Schramm would go on to form Tender Defender in 2015, considered by many to be an extension of Latterman.

The Extra Action Marching Band is an American musical group loosely based on the American marching band construct. The instrumentation is entirely brass, drums and one modified bullhorn. At performances, provocatively flamboyant cheerleaders with pom-poms and flags engage the audience.

"There's really no need to introduce the Extra Action Marching Band: The Bay Area institution has been crashing parties, invading bars, and blowing minds with its signature "high school marching band on acid" punk-meets-Sousa bombast for years now. The tuba players, flag team, and percussion section take perverse delight in twisting the staid conventions of their respective forms, and it can be downright disorienting to spot a sexy trombone player." - Hiya Swanhuyser – SF Weekly 2005 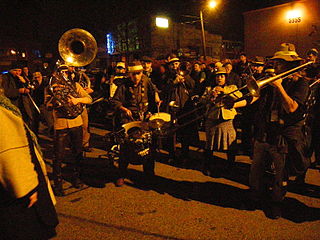 HONK!, also known as HONK! Fest, is a festival of activist street bands held annually on Columbus Day weekend in Somerville, Massachusetts. Each year since 2006, an all-volunteer organizing community invites more than 25 bands from around New England, North America, and the world to participate in this free three-day event that showcases acoustic and ambulatory bands playing free music in public spaces. Since its inception, it has inspired additional HONK! festivals in other locations.

Below the Belt was the debut album by Boxer, released on the Virgin label in January 1976. The album attracted less attention for its music than for its cover art. Photographed by Alex Henderson with graphics by Richard Evans, the cover featured model Stephanie Marrian spreadeagled and naked but for a pair of shoes, with a man's arm reaching up between her legs and his boxing-gloved hand hiding her genitalia. The back cover at first showed Stephanie in complete full-frontal nudity, but later pressings covered her up with the band's belt-styled logo. The cover was completely re-designed for the US market using the band photo from the inside of the UK gatefold cover. The lineup on this album is a live show quartet with keyboardist Chris Stainton brought in during the recording sessions.

Double Negative was a rock band from South Dublin, Ireland. The three band members had been childhood friends and attended CBC Monkstown in the South of Dublin. They were all inspired by the music of classic rock legends such as Jimi Hendrix, the Beatles and Guns n' Roses. The inspiration for coming together was to become popular with the ladies but instead they found their friendship was the only positive result. In 2007, they performed their original songs to a familiar crowd in the Voodoo Lounge, Dublin 1 to great reviews. Double Negative came to an end in 2008 when they all gave up and decided to go their separate ways. Mark Connolly became a secondary school teacher; Cillian Daly moved to London and is recently engaged. Ian Woods recently became a Doctor after successfully completing his PhD in biomedical engineering in UCD, much to the relief of his mother. Guitarist Scott Williams previously played in American Lore, Fight 4 Life, Second Coming, Days Of..., Dixie Automotive, Garbageman, Daddy and Volcanoes (band). Original drummer Brian Walsby had been in California's Scared Straight, Willard, Shiny Beast and Patty Duke Syndrome, as well as Wwax, Daddy, Siberian, Snake Nation and even the final Polvo line-up that recorded Shapes before they disbanded. Original singer Kevin Collins was in Subculture, Days Of and Erectus Monotone. Bassist Justin Gray was in Dixie Automotive, Big Dan, Willard, Garbageman, The Rails, and The Stepgods.

RVIVR is an American punk rock band from Olympia, Washington. The band tours frequently and their shows are characterised by energetic performances as well as defense of gender equality. They have released their studio albums and EPs as free downloads on Rumbletowne Records' website. 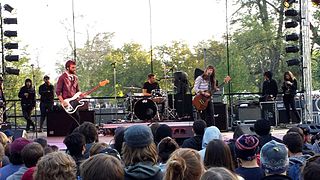 Riot Fest is an annual 3-day music festival based in Chicago, Illinois at Douglas Park. Riot Fest specializes in rock, punk, alternative rock, and hip hop. The festival is known for booking reunions, guest performances, and full album performances. First started as a multi-venue festival in Chicago in 2005, Riot Fest has since become an outdoor festival starting in 2012, later expanding to Denver and Toronto.

Sam North, better known as Sammy thrashLife, is an American painter and writer, best known for his art and blog, chronicling his experiences with borderline personality disorder, his history with heroin addiction and recovery, and his involvement in the American punk rock scene.

Arms Aloft is an American punk group from Eau Claire, Wisconsin. Their name is a reference to a song by Joe Strummer and the Mescalaros on their 2003 album Streetcore. Since their founding in 2007, the band has released two LP's, two EP's, one live album, and four split 7-inches. They have appeared on stage with notable groups like Teenage Bottlerocket, The Falcon (band), Dillinger Four and NOFX, and appeared at festivals like The War on X-Mas,, The Gilead Media Music Festival, The Fest, and Manchester Punk Festival.. 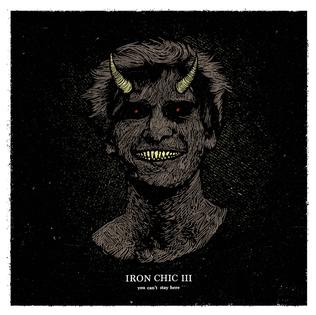 You Can't Stay Here is the third studio album by Long Island punk rock band Iron Chic. Like the band's previous work, the album was recorded in guitarist Phil Douglas' studio, The Hobo House. This was the first album with former Broadcaster guitarist Jesse Litwa replacing the late Rob McAllister on guitar.

Phil Douglas is an American musician and producer. He is best known for being one of the frontmen and guitarists of Latterman as well as the guitarist of Iron Chic. In 2015 Douglas reunited with his Latterman band mates and formed Tender Defender.