Ski racing may refer to:

Alpine skiing, or downhill skiing, is the pastime of sliding down snow-covered slopes on skis with fixed-heel bindings, unlike other types of skiing, which use skis with free-heel bindings. Whether for recreation or sport, it is typically practised at ski resorts, which provide such services as ski lifts, artificial snow making, snow grooming, restaurants, and ski patrol. 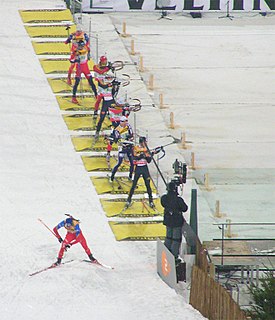 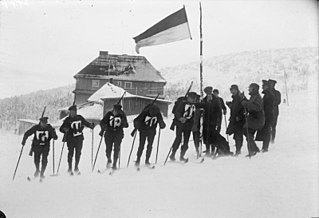 Military patrol was a team winter sport in which athletes competed in cross-country skiing, ski mountaineering and rifle shooting. It was usually contested between countries or military units. 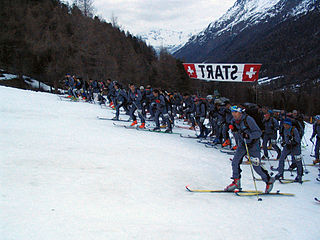 Speed skiing is the sport of skiing downhill in a straight line at as high a speed as possible, as timed over a fixed stretch of ski slope. There are two types of contest: breaking an existing speed record or having the fastest run at a given competition. Speed skiers regularly exceed 200 kilometres per hour (125 mph). 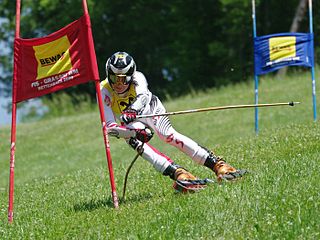 Grass skiing, skiing on grass, is a method for training for alpine skiing. Both grass skiing and alpine skiing have become established as sports in their own right. The skis used for grass skiing are short with rolling treads or wheels. These skis are attached to the skiers' boots. Depending on the skill of the grass skier, high speeds and jumps can be navigated.

The 1980 Winter Olympics, officially known as the XIII Olympic Winter Games, was a multi-sport event which was celebrated from February 13, through February 24, 1980, in Lake Placid, New York, United States. This was the second time the Upstate New York village hosted the Games, after 1932. The only other candidate city to bid for the Games was Vancouver-Garibaldi, British Columbia, Canada, which withdrew before the final vote

The 1988 Winter Paralympic Games were the fourth Winter Paralympics, held again in Innsbruck, Austria. These were the last Winter Paralympics to be held in a separate location from the Winter Olympics. Beginning in 1992, the Olympics and the Paralympics were held in the same city or in an adjacent city. These Paralympics were not held at the same Olympic venue in Calgary, Canada, because of financial and recruiting difficulties. A total of 377 athletes from 22 countries took part. The USSR competed for the first and only time. Sit-skiing was introduced as another event in both the Alpine and Nordic skiing competitions. Other sports were biathlon and ice sledge speed racing. Ice sledge speed racer Knut Lundstroem from Norway was the most successful athlete, winning four gold medals in the 100m, 500m, 1000m and 1500m events.

Fana Idrettslag is the biggest multi-sport club in Fana, Bergen, Norway. It has several branches, of which football is the largest. 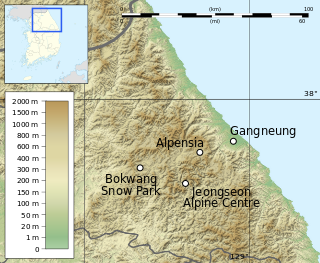