As of 2018, the Sotheby's International Realty network had more than 19,000 sales associates in 990 offices in 72 countries and territories worldwide. [2]

In February 2004, Sotheby’s entered into a long-term strategic alliance with real estate services provider Realogy Holdings Corp., now Anywhere Real Estate, Inc. The agreement provided for the licensing of the Sotheby’s International Realty name and the development of a full franchise system. Franchises in the system are granted to brokerages and individuals meeting Realogy's qualifications. The franchisor supports its agents with operational, marketing, recruiting, educational, and business development resources.[ citation needed ] [3] In 2012, the company launched a website for farm and ranch listings, the first in a series of specialty market Internet listings. [4] Subsequent focused marketing websites include waterfront, golf, ski, and historic properties.

The company publishes Reside, a semi-annual real estate and lifestyle magazine, which won the Hermes Platinum Award for creative excellence and outstanding design and editorial in 2009. [5]

Starwood Hotels and Resorts Worldwide, Inc. was one of the largest companies that owned, operated, franchised and managed hotels, resorts, spas, residences, and vacation ownership properties. It was acquired by Marriott International in 2016.

Cendant Corporation was an American provider of business and consumer services, primarily within the real estate and travel industries. In 2005 and 2006, it broke up and spun off or sold its constituent businesses. Although it was based in New York City, the majority of its headquarters employees were in Parsippany-Troy Hills, New Jersey.

ZipRealty is a website that offers real estate listings and homes for sale as part of Realogy’s company-owned brokerage operations, NRT LLC. Ziprealty.com is maintained by ZapLabs LLC, the innovation and technology development division of Realogy.

RE/MAX, short for Real Estate Maximums, is an American international real estate company that operates through a franchise system. As of 2015, RE/MAX had more than 100,000 agents in 6,800 offices. RE/MAX operates in about 100 countries.

Redfin Corporation, based in Seattle, operates a residential real estate brokerage in 95 markets in the United States and Canada. Its business model includes charging sellers below-average fees of 1.0% to 1.5% of the sales price of a property, in addition to fees to the buyer's agent of 2.0% to 2.5%, and provides commission rebates to purchasers of homes that use the service. The company name is an anagram of the words "finder" and "friend".

GMAC Real Estate was a real estate franchised broker. It had 13,000 agents. In 2008, it was acquired by Brookfield Asset Management and in 2012, it merged into HomeServices of America.

Anywhere Advisors is a residential real estate brokerage company in the United States of America. A subsidiary of Anywhere Real Estate, Inc., its headquarters are located in Madison, New Jersey. As of 2022, the company owns and operates more than 40 brokerage firms in approximately 55 U.S. markets. Most firms are branded under the Coldwell Banker, Coldwell Banker Commercial, Sotheby's International Realty or Corcoran Group brands.

Keller Williams Realty is an American technology and international real estate franchise with headquarters in Austin, Texas. It claimed to be the largest real estate franchise in number of agents and sales volume for 2018 and 2019. It is operated by a holding company named KWx which was formed in 2020.

Christie's International Real Estate is the luxury real estate arm of Christie's, the fine art auction house. This wholly owned subsidiary was established in 1995 and is an international network of high-end real estate brokers. 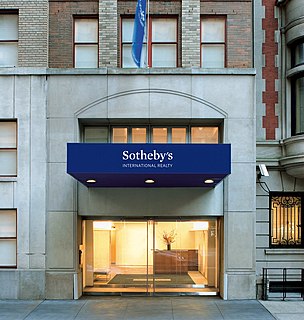 Concierge Auctions is a residential real estate company based in New York and Texas. It auctions properties to the highest bidder and has worked with celebrity and business figures such as Michael Jordan, Barbara Corcoran, Eli Broad, Cher as well as a home featured on Keeping Up With The Kardashians.

Joyce Rey is a Beverly Hills-based luxury real estate agent who heads the Global Luxury division for Coldwell Banker. She is considered one of the most successful real estate agents in the United States and has represented clients for homes that include Pickfair, the Owlwood Estate, Le Belvedere and Greenacres.