In botany and agriculture, stunting describes a plant disease that results in dwarfing and loss of vigor. It may be caused by infectious or noninfectious means. [1] [2] [3]

A stunt caused by infectious means usually is too late to cure.[ citation needed ]

A stunt caused by noninfectious means could sometimes be remedied.[ citation needed ]

An infection is the invasion of tissues by pathogens, their multiplication, and the reaction of host tissues to the infectious agent and the toxins they produce. An infectious disease, also known as a transmissible disease or communicable disease, is an illness resulting from an infection. 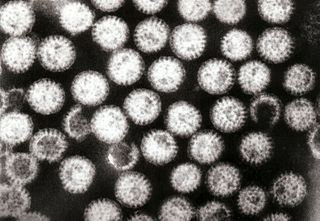 Diarrhea, also spelled diarrhoea, is the condition of having at least three loose, liquid, or watery bowel movements each day. It often lasts for a few days and can result in dehydration due to fluid loss. Signs of dehydration often begin with loss of the normal stretchiness of the skin and irritable behaviour. This can progress to decreased urination, loss of skin color, a fast heart rate, and a decrease in responsiveness as it becomes more severe. Loose but non-watery stools in babies who are exclusively breastfed, however, are normal. 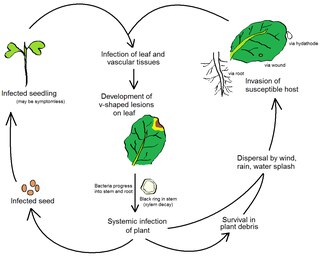 Calcium (Ca) deficiency is a plant disorder that can be caused by insufficient level of biologically available calcium in the growing medium, but is more frequently a product of low transpiration of the whole plant or more commonly the affected tissue. Plants are susceptible to such localized calcium deficiencies in low or non-transpiring tissues because calcium is not transported in the phloem. This may be due to water shortages, which slow the transportation of calcium to the plant, poor uptake of calcium through the stem, or too much nitrogen in the soil.

Nitrogen deficiency is a deficiency of nitrogen in plants. This can occur when organic matter with high carbon content, such as sawdust, is added to soil. Soil organisms use any nitrogen available to break down carbon sources, making nitrogen unavailable to plants. This is known as "robbing" the soil of nitrogen. All vegetables apart from nitrogen fixing legumes are prone to this disorder. 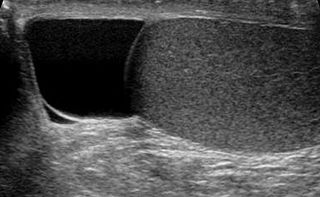 Spermatocele is a fluid-filled cyst that develops at the top of the testicle of the epididymis. The fluid is usually a clear or milky white color and may contain sperm. Spermatoceles are typically filled with spermatozoa and they can vary in size from several millimeters to many centimeters. Small spermatoceles are relatively common, occurring in an estimated 30 percent of males. They are generally not painful. However, some people may experience discomfort such as a dull pain in the scrotum from larger spermatoceles. They are not cancerous, nor do they cause an increased risk of testicular cancer. Additionally, unlike varicoceles, they do not reduce fertility.

Abdominal bloating is a short-term disease that affects the gastrointestinal tract. Bloating is generally characterized by an excess buildup of gas, air or fluids in the stomach. A person may have feelings of tightness, pressure or fullness in the stomach; it may or may not be accompanied by a visibly distended abdomen. Bloating can affect anyone of any age range and is usually self-diagnosed, in most cases does not require serious medical attention or treatment. Although this term is usually used interchangeably with abdominal distension, these symptoms probably have different pathophysiological processes, which are not fully understood.

Hyperoxia occurs when cells, tissues and organs are exposed to an excess supply of oxygen (O2) or higher than normal partial pressure of oxygen.

An arthropathy is a disease of a joint. 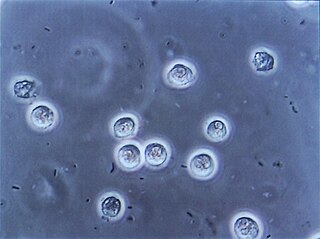 Hemorrhagic cystitis or haemorrhagic cystitis is an inflammation of the bladder defined by lower urinary tract symptoms that include dysuria, hematuria, and hemorrhage. The disease can occur as a complication of cyclophosphamide, ifosfamide and radiation therapy. In addition to hemorrhagic cystitis, temporary hematuria can also be seen in bladder infection or in children as a result of viral infection.

Urine is a liquid by-product of metabolism in humans and in many other animals. Urine flows from the kidneys through the ureters to the urinary bladder. Urination results in urine being excreted from the body through the urethra. 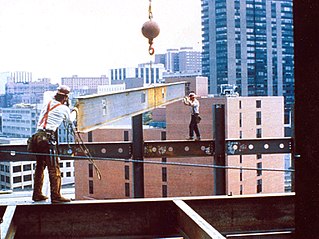 An occupational hazard is a hazard experienced in the workplace. This encompasses many types of hazards, including chemical hazards, biological hazards (biohazards), psychosocial hazards, and physical hazards. In the United States, the National Institute for Occupational Safety and Health (NIOSH) conduct workplace investigations and research addressing workplace health and safety hazards resulting in guidelines. The Occupational Safety and Health Administration (OSHA) establishes enforceable standards to prevent workplace injuries and illnesses. In the EU, a similar role is taken by EU-OSHA.

Verticillium longisporum, also known as Verticillium Wilt, is a fungal plant pathogen that commonly infects canola. V. longisporum can attack other brassica plants as well as woody ornamentals. A main symptom of the infected plant is wilting. In America, V. longsiporum primarily effects eudicot plants. This pathogen can be very devastating and hard to eradicate, responding only to expensive fumigation or fungal resistant plants. 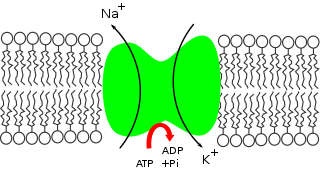 Sodium ions (Na+) are necessary in small amounts for some types of plants, but sodium as a nutrient is more generally needed in larger amounts by animals, due to their use of it for generation of nerve impulses and for maintenance of electrolyte balance and fluid balance. In animals, sodium ions are necessary for the aforementioned functions and for heart activity and certain metabolic functions. The health effects of salt reflect what happens when the body has too much or too little sodium. Characteristic concentrations of sodium in model organisms are: 10mM in E. coli, 30mM in budding yeast, 10mM in mammalian cell and 100mM in blood plasma.

A gnat is any of many species of tiny flying insects in the dipterid suborder Nematocera, especially those in the families Mycetophilidae, Anisopodidae and Sciaridae. They can be both biting and non-biting. Most often they fly in large numbers, called clouds. "Gnat" is a loose descriptive category rather than a phylogenetic or other technical term, so there is no scientific consensus on what constitutes a gnat. Some entomologists consider only non-biting flies to be gnats. Certain universities and institutes also distinguish eye gnats: the Smithsonian Institution describes them as "non-biting flies, no bigger than a few grains of salt, ... attracted to fluids secreted by your eyes". 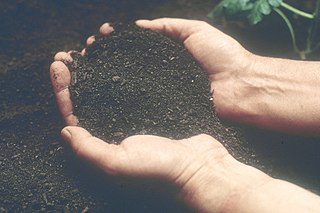 Soil regeneration, as a particular form of ecological regeneration within the field of restoration ecology, is creating new soil and rejuvenating soil health by: minimizing the loss of topsoil, retaining more carbon than is depleted, boosting biodiversity, and maintaining proper water and nutrient cycling. This has many benefits, such as: soil sequestration of carbon in response to a growing threat of climate change, a reduced risk of soil erosion, and increased overall soil resilience.

Edema,, is a disorder in plants caused by the build-up of water in plant tissues faster than the leaves can transpire. The excess fluid bursts the cell membranes, causing the appearance of growths, particularly on the underside of leaves.