Sybil is a 1921 British silent drama film directed by Jack Denton and starring Evelyn Brent, Cowley Wright and Gordon Hopkirk. [1] It is an adaptation of the 1845 novel Sybil by Benjamin Disraeli. It is considered to be a lost film. 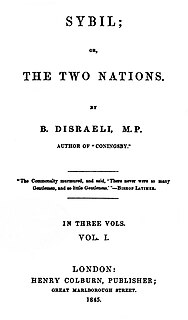 Sybil, or The Two Nations is an 1845 novel by Benjamin Disraeli. Published in the same year as Friedrich Engels's The Condition of the Working Class in England in 1844, Sybil traces the plight of the working classes of England. Disraeli was interested in dealing with the horrific conditions in which the majority of England's working classes lived — or, what is generally called the Condition of England question.

Jungle Jim is a 1937 Universal serial film based on Jungle Jim, the comic strip by Alex Raymond. Grant Withers starred as Jungle Jim, and Henry Brandon played the villainous Cobra.

The Mating Call is a 1928 silent drama film about a soldier who returns home from World War I to find his marriage has been annulled and his wife has remarried. The film was produced by Howard Hughes for his Caddo Corporation, and was originally released by Paramount Pictures. It is based on the novel of the same name by Rex Beach. Renée Adorée has a brief nude scene in the film.

Hubert Gordon Hopkirk was a British actor of the silent era. He was born in Jena, Germany to British parents and began his film career in the late 1910s. After a series of films in Britain, he went to the United States to appear in Hollywood films before returning to Britain. Hopkirk never married. Later in life he converted to Buddhism and resided in Bangkok, Thailand. He died in a car accident at the age of 72.

Cowley Wright was an English actor.

Demos is a 1921 silent British drama film directed by Denison Clift. The film is considered to be lost.

Midnight Molly is a 1925 American silent drama film directed by Lloyd Ingraham and starring Evelyn Brent in a dual role. A print of the film exists in the BFI National Archive.

Smooth as Satin is a 1925 American silent drama film based upon the stage play, The Chatterbox, by Bayard Veiller. It was directed by Ralph Ince and stars Evelyn Brent. The film was remade in 1930, entitled Alias French Gertie.

Sahara Love is a 1926 British-Spanish silent drama film directed by Sinclair Hill and starring Marie Colette, Jean Dehelly and Sybil Rhoda. It was based on a novel by A.L. Vincent. The production company held a competition, the winner of which was given a leading role in the film.

Fast Company is a 1929 American Pre-Code sports comedy film directed by A. Edward Sutherland and starring Jack Oakie and Evelyn Brent. It is based upon the play Elmer the Great by George M. Cohan and Ring Lardner. According to the Internet Movie Database, the UCLA Film and Television Archive has reels 1, 2, and 3 of this film, with reel 4 having disintegrated in 1990.

The Notorious Mrs. Carrick is a 1924 British silent crime film directed by George Ridgwell and starring Cameron Carr, A.B. Imeson and Gordon Hopkirk. It was an adaptation of the novel Pools of the Past by Charles Proctor. The film was made by Britain's largest film company of the era Stoll Pictures.

Sirens of the Sea is a 1917 American silent fantasy film directed and written by Allen Holubar based upon a screen story by Grace Helen Bailey. Featuring Louise Lovely, it was distributed by the Jewel Productions division of Universal Film Manufacturing Company. It is not known whether the film currently survives. 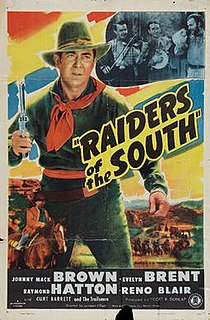 The Gunman from Bodie is a 1941 American Western film directed by Spencer Gordon Bennet and written by Adele Buffington. This is the second film in Monogram Pictures' Rough Riders series, and stars Buck Jones as Marshal Buck Roberts, Tim McCoy as Marshal Tim McCall and Raymond Hatton as Marshal Sandy Hopkins, with Christine McIntyre, Dave O'Brien and Robert Frazer. The film was released on September 26, 1941.

Say It with Music is a 1932 British musical film directed by Jack Raymond and starring Jack Payne, Percy Marmont and Evelyn Roberts. It was produced by Herbert Wilcox's British and Dominions Films at Elstree Studios. It takes its title from the 1921 song Say It with Music by Irving Berlin which features in the soundtrack, and was an early example of a string of bandleader films produced during the decade.