Tatiana Cordero Velázquez (23 February 1961 – 13 April 2021) was an Ecuadorian feminist activist, considered one of the forerunners in the fight for the rights of women and LGBT populations in the country. Until her death she was director of Fondo de Acción Urgente para América Latina y el Caribe, that she had founded herself. [1] [2] [3]

LACNIC is the regional Internet registry for the Latin American and Caribbean regions.

The OPANAL is an international organization which promotes a non-aggression pact and nuclear disarmament in much of the Americas. In English, its name is the Agency for the Prohibition of Nuclear Weapons in Latin America and the Caribbean. The agency was created as a result of the Treaty of Tlatelolco, ratified in 1969, which forbids its signatory nations from use, storage, or transport of nuclear weapons.

Carlos Andrés Escudé Carvajal was an Argentine political scientist and author, who during the 1990s served as special advisor to foreign minister Guido di Tella. As such, he advised on Argentine foreign policy strategy vis-à-vis the Western powers particularly in the wake of the Falklands War.

Dr. José Gualberto Padilla, also known as El Caribe, was a physician, poet, journalist, politician, and advocate for Puerto Rico's independence. He suffered imprisonment and constant persecution by the Spanish Crown in Puerto Rico because his patriotic verses, social criticism and political ideals were considered a threat to Spanish Colonial rule of the island.

Mu-Kien Adriana Sang Ben is a historian, essayist, analyst, political scientist and academic from the Dominican Republic. Sang is Vice-Rector of the Pontifical Catholic University Mother and Teacher. 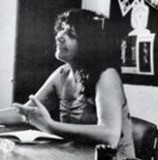 Samuel Silva Gotay is a sociologist of religion of Puerto Rico and Latin America. He was born in Ponce, Puerto Rico in 1935.

tatiana de la tierra was a Latina lesbian writer born in Colombia. She was the creator of the first international Latina lesbian magazine Esto no tiene nombre; the quarterly magazine was distributed in various parts of the United States and to many Latin American countries, including Colombia. Much of her writing was bilingual and bicultural featuring both the English and Spanish language and contained very sexual content. Through her work, de la tierra gave voice to LGBTQ people of color and inspired other writers to speak about sex and sexuality in an honest manner.

Hilda María Herzer was an Argentine sociologist, environmentalist and professor. She was a researcher with FLACSO, and visiting professor at Universidad Nacional del Litoral.

Silvia Berger works at the Ministry of Economics and Production in Argentina, Latin American Council of Social Sciences (CLACSO), and is a post-graduate university teacher at the Latin American Social Sciences Institute. and past president of the International Association for Feminist Economics (IAFFE), her tenure was from 2017 to 2018. 7 Berger is a member of the editorial committee for the Mexican journal Ola Financiera.

Juan Alberto Fuentes Knight is a Guatemalan economist, politician, and non-profit official. Among other roles, he has served as Minister of Finance in Guatemala and as chairman of Oxfam International.

Sergia Galván Ortega is a Dominican feminist teacher, counselor and activist. She is known in the public sphere for her constant struggle for women's rights.

Violeta Bermúdez Valdivia is a Peruvian lawyer, writer and diplomat. On 18 November 2020, Bermúdez became the Prime Minister of Peru. Previously, she held posts in the United States Agency for International Development and worked during the cabinets of President Alejandro Toledo and Prime Minister Beatriz Merino.

Arcadi Oliveres i Boadella was a Spanish economist, academic, and social activist. He was president of "Justícia i Pau", a Christian peace group in Catalonia, and helped to promote its war tax resistance campaign.