The Amazing Extraordinary Friends is a New Zealand superhero television series featuring the adventures of a modern-day superhero teenage boy and his friends.

The protagonist is a teenage boy called Ben Wilson who finds out about a superhero insignia which gives him powers. He has difficulty with them, especially flight and using eye lasers at first, but soon learns to control them fairly well. His grandfather is also a superhero, and this is how he comes to acquire the insignia. His mother hates all the superhero business going on for the sake of safety, but his father and stepfather both encourage him, his father being the previous superhero in Ben's position, Captain Xtraordinary or simply Captain X, and his stepfather being the son of a supervillain, The Comedian. The position, it is found out in the show, has been held by many heroes in the past.

The villains in the series are Nemesis, a group led by an old villain and a recently converted hero, Ice, who used to be Blaze in her former era working alongside the former Captain X. The Nemesis group operate in a skyscraper office block known as Nemesis Headquarters and use computers, suggesting they have updated since the old times. A loose idea of a "new age of superheroes" is suggested throughout the series. They use stormtroopers with skull like masks and breathing apparatus. The Nemesis group have many villains under their wing and it is run by Renfield, the main villain in the series who Ice assists in his constant plan to get the insignia.

The plot generally involves the insignia, the main target for possession by Nemesis. It is discovered in the series that the power giving insignia, which merges with a persons chest and in the case of Captain Xtraordinary creates a costume as well, is made of Unobtainium, a highly unstable element created by an exiled university scientist. Unobtainium can also, it is discovered, power a ready made suit. The insignia was created using the Unobtainium, which only existed naturally during a short period after the creation of the universe. Aliens claim to have made it and these resemble humans, even using English as their language of choice.

The show uses several minor devices from the classic superhero/supervillain genre, including tags like Nemesis Headquarters or Ben Wilson's House in the same manner as in changing a location in a comic book. Also background music and sound accompaniment is often done in the style of animated superhero series.

The series is set in a fictional city called City Central, filmed in Auckland.

It is currently being shown on ABC television in Australia on weekdays at 5:50 pm. In America, the show airs on Universal Kids. 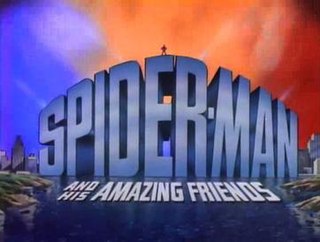 Spider-Man and His Amazing Friends is a 1981-1983 American animated television series produced by Marvel Productions, considered to be a crossover series connected to the 1981 Spider-Man series. The show stars already-established Marvel Comics characters Spider-Man and Iceman, plus an original character, Firestar. As a trio called the Spider-Friends, they fought against various villains of the Marvel Universe.

The Legion of Doom is a group of supervillains that originated in Challenge of the Super Friends, an animated series from Hanna-Barbera based on DC Comics' Justice League. The Legion of Doom has since been incorporated into the main DC Universe, appearing in comics, as well as further animated and live-action adaptations, and also video games. 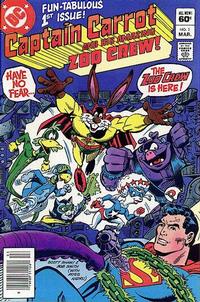 Captain Carrot and His Amazing Zoo Crew! is a DC Comics comic book about a team of funny animal superheroes called the Zoo Crew. The characters first appeared in a 16-page special insert in The New Teen Titans #16, followed by a series published from 1982 to 1983. The Zoo Crew characters were created by Roy Thomas and Scott Shaw! Although the series, which was the last original funny animal property to be created by DC Comics, proved short-lived, it is still fondly remembered by many comic fans of its generation, and the characters appear occasionally in cameos in the mainstream DC Universe.

The Masters of Evil is a fictional supervillain team appearing in American comic books published by Marvel Comics. The first version of the team appeared in The Avengers #6, with the lineup continually changing over the years.

Courtney Elizabeth Whitmore, known as Stargirl, is a fictional superhero created by Geoff Johns and Lee Moder who appears in American comic books published by DC Comics. The character's name, appearance, and personality were patterned after Johns' sister Courtney, who died in the explosion of TWA Flight 800 in 1996. 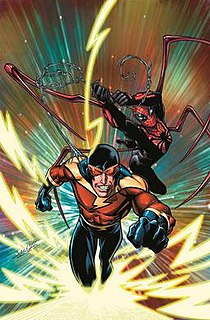 Speed Demon is a fictional character, a supervillain appearing in American comic books published by Marvel Comics. Created by Roy Thomas and Sal Buscema, the character made his first appearance in The Avengers #69 as a member of the Squadron Sinister known as the Whizzer. 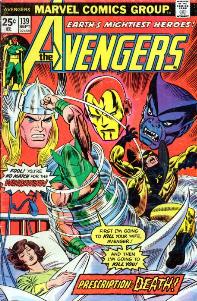 Whirlwind is a fictional character, a supervillain appearing in American comic books published by Marvel Comics. He is a recurrent villain of Ant-Man and the Wasp, but he also fought Captain America and Spider-Man among the others. 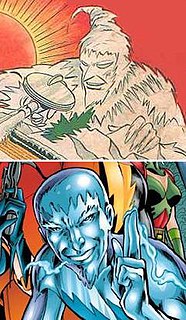 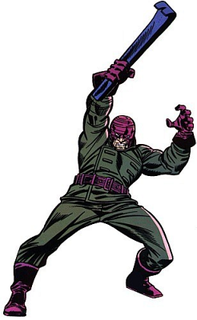 The Wrecker is a fictional character, a supervillain appearing in American comic books published by Marvel Comics. 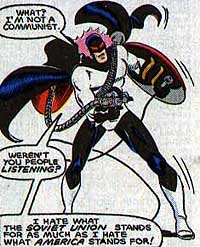 The Flag-Smasher is the name used by two fictional anti-nationalist supervillains appearing in American comic books published by Marvel Comics, initially by Karl Morgenthau before Guy Thierrault took up the mantle after the former's death. The original was most often a foe of Captain America while other adversaries include the Punisher, Moon Knight, Ghost Rider, the Runaways, the Liberteens and Deadpool. 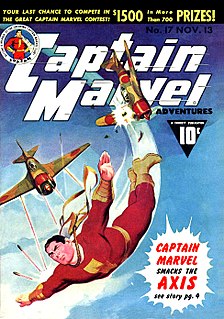 Hero.com and Villain.net are two series of superhero novels by the English author Andy Briggs.

As a fictional character and the archenemy of Batman, the Joker has been represented in a variety of different stories that redefine elements of the character's appearance and personality. Each work typically establishes its own continuity, and sometimes introduces parallel universes, to the point where distinct differences in the portrayal of the character can be identified. This article details various versions of the Joker depicted in works including various alternative universe stories. 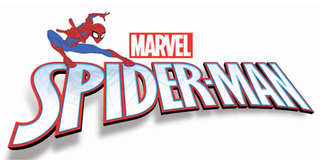 Spider-Man is an American animated television series that is based on the Marvel Comics character of the same name. A replacement for the previous series Ultimate Spider-Man, the first season premiered on August 19, 2017 on Disney XD. The show was subtitled Spider-Man: Maximum Venom for its third season, which premiered on April 19, 2020.