"The Hearse Song" is a song about burial and human decomposition, of unknown origin. It was popular as a World War I song, and was popular in the 20th century as an American and British children's song, continuing to the present. It has many variant titles, lyrics, and melodies, [1] but generally features the line "The worms crawl in, the worms crawl out," and thus is also known as "The Worms Crawl In." [2] Generally, the song recounts the viewing of a hearse, prompting the thought of death. The listener's body is buried in a casket and assaulted by worms, then decomposes; some versions continue by stating the dead listener will be forced to eat their moldering remains. [3]

The earliest version of the verse is found in a poem by the English writer Matthew Lewis, incorporated in his popular 1796 Gothic novel The Monk , which includes the lines, "The worms they crept in, and the worms they crept out and sported his eyes and his temples about." While there are reports of the song dating back to British soldiers in the Crimean War (1853–1856), [4] it certainly dates to at least World War I (1914–1918), when it was sung by American and British soldiers, [5] and was collected in various World War I songbooks of the 1920s. [6]

The key line, "The worms crawl in, the worms crawl out" appears in some versions of the otherwise unrelated song, There Was a Lady All Skin and Bone, and may date to 1810 or earlier. [4] [6]

American folklore encompasses the folklores that have evolved in the present-day United States since Europeans arrived in the 16th century. While it contains much in the way of Native American tradition, it is not wholly identical to the tribal beliefs of any community of native people. 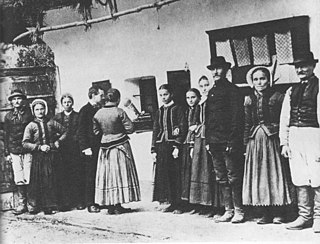 Folk music is a music genre that includes traditional folk music and the contemporary genre that evolved from the former during the 20th-century folk revival. Some types of folk music may be called world music. Traditional folk music has been defined in several ways: as music transmitted orally, music with unknown composers, music that is played on traditional instruments, music about cultural or national identity, music that changes between generations, music associated with a people's folklore, or music performed by custom over a long period of time. It has been contrasted with commercial and classical styles. The term originated in the 19th century, but folk music extends beyond that.

Folklore is the body of culture shared by a particular group of people; it encompasses the traditions common to that culture, subculture or group. This includes oral traditions such as tales, legends, proverbs and jokes. They include material culture, ranging from traditional building styles to handmade toys common to the group. Folklore also includes customary lore, taking actions for folk beliefs, the forms and rituals of celebrations such as Christmas and weddings, folk dances and initiation rites. Each one of these, either singly or in combination, is considered a folklore artifact or traditional cultural expression. Just as essential as the form, folklore also encompasses the transmission of these artifacts from one region to another or from one generation to the next. Folklore is not something one can typically gain in a formal school curriculum or study in the fine arts. Instead, these traditions are passed along informally from one individual to another either through verbal instruction or demonstration. The academic study of folklore is called folklore studies or folkloristics, and it can be explored at undergraduate, graduate and Ph.D. levels. 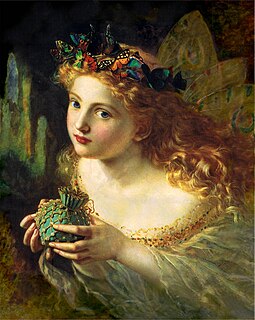 A fairy is a type of mythical being or legendary creature found in the folklore of multiple European cultures, a form of spirit, often described as metaphysical, supernatural, or preternatural. 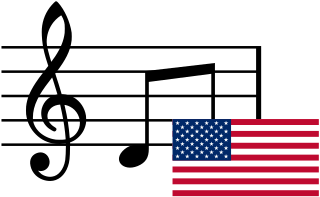 The music of the United States reflects the country's pluri-ethnic population through a diverse array of styles. It is a mixture of music influenced by the music of the United Kingdom, West Africa, Ireland, Latin America, and mainland Europe, among other places. The country's most internationally renowned genres are jazz, blues, country, bluegrass, rock, rock and roll, R&B, pop, hip hop, soul, funk, gospel, disco, house, techno, ragtime, doo-wop, folk music, americana, boogaloo, tejano, reggaeton, surf, and salsa. American music is heard around the world. Since the beginning of the 20th century, some forms of American popular music have gained a near global audience.

The term American folk music encompasses numerous music genres, variously known as traditional music, traditional folk music, contemporary folk music, or roots music. Many traditional songs have been sung within the same family or folk group for generations, and sometimes trace back to such origins as Great Britain, Mainland Europe, or Africa. Musician Mike Seeger once famously commented that the definition of American folk music is "...all the music that fits between the cracks."

Scottish folk music is a genre of folk music that uses forms that are identified as part of the Scottish musical tradition. There is evidence that there was a flourishing culture of popular music in Scotland during the late Middle Ages, but the only song with a melody to survive from this period is the "Pleugh Song". After the Reformation, the secular popular tradition of music continued, despite attempts by the Kirk, particularly in the Lowlands, to suppress dancing and events like penny weddings. The first clear reference to the use of the Highland bagpipes mentions their use at the Battle of Pinkie Cleugh in 1547. The Highlands in the early seventeenth century saw the development of piping families including the MacCrimmons, MacArthurs, MacGregors and the Mackays of Gairloch. There is also evidence of adoption of the fiddle in the Highlands. Well-known musicians included the fiddler Pattie Birnie and the piper Habbie Simpson. This tradition continued into the nineteenth century, with major figures such as the fiddlers Niel and his son Nathaniel Gow. There is evidence of ballads from this period. Some may date back to the late Medieval era and deal with events and people that can be traced back as far as the thirteenth century. They remained an oral tradition until they were collected as folk songs in the eighteenth century. 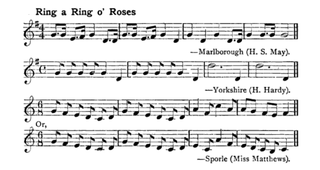 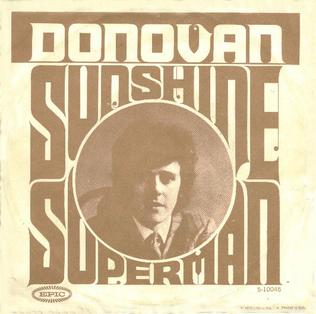 "Sunshine Superman" is a song written and recorded by Scottish singer-songwriter Donovan. It was released as a single in the United States through Epic Records in July 1966, but due to a contractual dispute the United Kingdom release was delayed until December 1966, where it appeared on Donovan's previous label, Pye Records. The single was backed with "The Trip" on both the US and UK releases. It has been described as "[one of the] classics of the era", and as "the quintessential bright summer sing along".

"Cotton-Eyed Joe" is a traditional American country folk song popular at various times throughout the United States and Canada, although today it is most commonly associated with the American South. The song is also an instrumental banjo and fiddle bluegrass standard.

Robin Hood's Chase is Child ballad 146 and a sequel to Child ballad 145, "Robin Hood and Queen Katherine". This song has survived as, among other forms, a late seventeenth-century English broadside ballad, and is one of several ballads about the medieval folk hero that form part of the Child Ballads, a comprehensive collection of traditional English and Scottish ballads.

The black dog is a supernatural, spectral or demonic entity originating from English folklore that has also been seen throughout Europe and the Americas. It is usually unnaturally large with glowing red or yellow eyes, is often connected with the Devil, and is sometimes an omen of death. It is sometimes associated with electrical storms, and also with crossroads, barrows, places of execution and ancient pathways.

"Points of Authority" is a song by American rock band Linkin Park. It is the fourth track on their first studio album, Hybrid Theory. Mike Shinoda's verses originally had different lyrics, and Chester Bennington's parts became no different from the Hybrid Theory version. The song was released in 2001 as a promo release. A CD single for the song was set to be released in the UK in September 2001, but instead, "Papercut" was released as the third single from the album. It was later planned as the fifth official single from the album, planned for a January 2002 release but was cancelled for unknown reasons. In its place, the song's remix version was released. 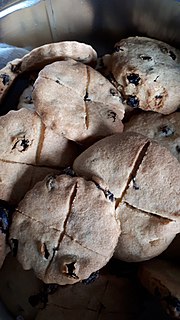 A soul cake, also known as a soulmass-cake, is a small round cake which is traditionally made for Halloween, All Saints' Day and All Souls' Day to commemorate the dead in many Christian traditions. The cakes, often simply referred to as souls, are given out to soulers who go from door to door during the days of Allhallowtide singing and saying prayers "for the souls of the givers and their friends". The practice in England dates to the medieval period, and was continued there until the 1930s. In Sheffield and Cheshire, the custom has continued into modern times. In Lancashire and in the North-east of England soul cakes were known as Harcakes, a kind of thin parkin.

"The House of the Rising Sun" is a traditional folk song, sometimes called "Rising Sun Blues". It tells of a person's life gone wrong in the city of New Orleans. Many versions also urge a sibling or parents and children to avoid the same fate. The most successful commercial version, recorded in 1964 by the British rock band The Animals, was a number one hit on the UK Singles Chart and in the US and Canada. As a traditional folk song recorded by an electric rock band, it has been described as the "first folk rock hit". 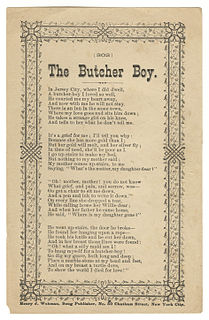 "The Butcher’s Boy" or "The Butcher Boy" is an American folk song derived from traditional English ballads. Folklorists of the early 20th century considered it to be a conglomeration of several English broadside ballads, tracing its stanzas to "Sheffield Park", "The Squire's Daughter", "A Brisk Young Soldier", "A Brisk Young Sailor" and "Sweet William " and "Died for Love".

Assipattle and the Stoor Worm is an Orcadian folktale relating the battle between the eponymous hero and a gigantic sea serpent known as the stoor worm. The tale was preserved by 19th-century antiquarian Walter Traill Dennison, and retold by another Orcadian folklorist, Ernest Marwick, in a 20th-century version that integrates Dennison's texts with tidbits from other oral storytellers.