It tells the story of a caboose who longs to be as popular as the steam engine at the front of the train, and gains the respect and admiration of all when it saves the train from rolling down a steep hill. [1] 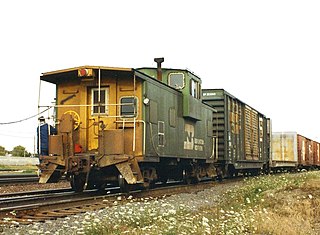 A caboose is a crewed North American railroad car coupled at the end of a freight train. Cabooses provide shelter for crew at the end of a train, who were formerly required in switching and shunting, keeping a lookout for load shifting, damage to equipment and cargo, and overheating axles. 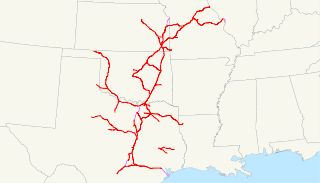 The Missouri–Kansas–Texas Railway is a former Class I railroad company in the United States, with its last headquarters in Dallas, Texas. Established in 1865 under the name Union Pacific Railway, Southern Branch, it came to serve an extensive rail network in Texas, Oklahoma, Kansas, and Missouri. In 1988, it merged with the Missouri Pacific Railroad; today, it is part of Union Pacific Railroad. 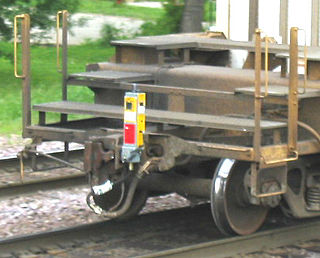 The end of train device (ETD), sometimes referred to as an EOT, flashing rear-end device (FRED) or sense and braking unit (SBU) is an electronic device mounted on the end of freight trains in lieu of a caboose. They are divided into three categories: "dumb" units, which only provide a visible indication of the rear of the train with a flashing red taillight; "average intelligence" units with a brake pipe pressure gauge; and "smart" units, which send back data to the crew in the locomotive via radio-based telemetry. They originated in North America, and are also used elsewhere in the world, where they may include complete End of Train Air System (ETAS) or Sense and Brake Unit (SBU) devices.

The Gulf, Mobile and Ohio was a Class I railroad in the central United States whose primary routes extended from Mobile, Alabama, and New Orleans, Louisiana, to St. Louis and Kansas City, Missouri, as well as Chicago, Illinois. 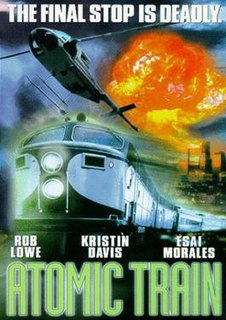 Atomic Train is a 1999 American made-for-television disaster-action-thriller miniseries about an accidental nuclear explosion destroying the city of Denver. It was originally broadcast on NBC in two parts on May 16 and 17, 1999.

Catch the Moon is an album by Lisa Loeb and Elizabeth Mitchell released in 2003 by Artemis Records. The album is a collection of children's music played in a folk music style. It comes in the form of a child's cardboard storybook written by Erin Courtney and illustrated by Bonnie Brook Mitchell. The CD slides out the top of the back cover.

The Wilmington and Western Railroad is a freight and heritage railroad in northern Delaware, operating over a former Baltimore and Ohio Railroad (B&O) branch line between Wilmington and Hockessin. The 10.2-mile (16.4 km) railroad operates both steam and diesel locomotives. It was added to the National Register of Historic Places as a national historic district in 1980. Wilmington & Western serves one customer for revenue service, and interchanges with CSX Transportation at Landenberg Junction, Delaware

A caboose is a crewed railroad car at the end of a freight train in North America.

Beginner Books is the Random House imprint for young children ages 3–9, co-founded by Phyllis Cerf with Ted Geisel, more often known as Dr. Seuss, and his wife Helen Palmer Geisel. Their first book was Dr. Seuss's The Cat in the Hat (1957), whose title character appears in the brand's logo. Cerf compiled a list of 379 words as the basic vocabulary for young readers, along with another 20 slightly harder "emergency" words. No more than 200 words were taken from that list to write The Cat in the Hat. Subsequent books in the series were modeled on the same requirement.

Constitution Park is located in Cumberland, Maryland in the East Side Cumberland district. The park has two playgrounds, tennis and basketball courts, several pavilions, a duck pond and a public swimming pool. A museum area contains a train caboose, fire truck, a P-80 dual seat trainer and an M56 Scorpion.

Tales of the Red Caboose was a short-lived primetime television series that aired on the American Broadcasting Company television network, premiering October 29, 1948 and running until January 14, 1949. 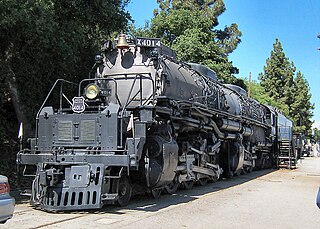 RailGiants Train Museum is a railroad museum of historic trains located at the Fairplex in Pomona, California, United States. 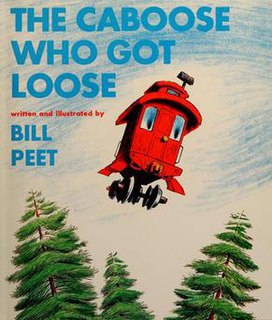 The Caboose Who Got Loose is a children's picture book written and illustrated by Bill Peet. 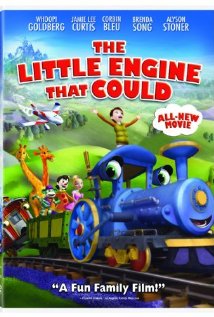 The Little Engine That Could is a 2011 American direct-to-DVD computer-animated film based on the 1930 story by Watty Piper.

"Forty Percent Leadbelly" is the fourteenth episode of the seventh season of the animated sitcom Futurama. It originally aired on Comedy Central on July 3, 2013. The episode was written by Ken Keeler and directed by Stephen Sandoval. In this episode, Bender meets his hero, Silicon Red, a folk singer who has been in jail 30 times, during a convict transport, and uses a wireless 3D printer to duplicate his guitar, but the wireless connection between Bender's brain and the 3D printer turns his folk song about an angry space railbot hunting down Bender into reality.

Norge Train Depot is a historic home located at Norge, near Williamsburg, James City County, Virginia. It was built about 1907 by the Chesapeake and Ohio Railway from standardized plans. The train station is the last surviving example of a wood frame "informal standard" depot in the six states that were served by Chesapeake and Ohio Railway. Originals were built according to an informal plan and no standard drawings were prepared or entered in the railway's set of design standards.

The Red Caboose Motel is a 48-room train motel in the Amish country near Ronks, in Lancaster County, Pennsylvania, where guests stay in actual railroad cabooses. The motel consists of over three dozen cabooses and some other railroad cars, such as dining cars that serve as a restaurant. It was developed and opened in 1970 by Donald M. Denlinger, who started with 19 surplus cabooses bought from the Penn Central Railroad at an auction. The property has been expanded and renovated since opening. In addition to providing lodging, the motel has hosted many railroad-themed events and other concerts and dances in its barn.