The Online College is part of The Sheffield College in South Yorkshire, England. It runs a number of courses that are delivered online ranging from basic English and numeracy skills to Foundation Degrees leading to BA Hons Degrees in partnership with Sheffield Hallam University.

The College has been offering online learning to learners and their employers since 1997. All courses lead to nationally recognised qualifications.

The Online College and its staff have won the following awards:

The origins of the Online College go back to 1999 when a blind GCSE English student at Sheffield College used software on her laptop computer to listen to an electronic dramatisation of the text version of Macbeth. That year Sheffield College tutor Julie Hooper began to use email to mark and receive work from a student working on an oil rig and unable to attend every lesson. In 2001, the first fully online GCSE English course was launched followed two years later by an online English A-level.

Wyggeston and Queen Elizabeth I College (WQE) is a sixth form college, located in Leicester, England. The college is led by Paul Wilson who was appointed the eighth principal in March 2018. The college absorbed the nearby Regent College in 2018 to form an institution with approximately 2,000 full-time 16–18-year-old students and 140 teaching staff. More than 40 subjects are offered at A Level. 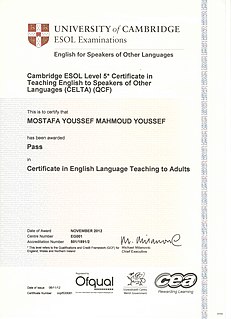 Milton Keynes College is a general further education and training college, serving the Borough of Milton Keynes. It also serves the surrounding areas. It also provides tertiary education to Foundation Degree level. Its degree-level courses are validated by the Open University and the University of Bedfordshire.

Delta is an English language teaching (ELT) qualification for experienced Teachers of English as a Foreign Language (TEFL) and Teachers of English to Speakers of Other Languages (TESOL). It is provided by Cambridge English Language Assessment through authorised Cambridge English Teaching Qualification centres and can be taken either full-time or part-time. The course was originally known as DELTA and is still referred to in this way by some course providers. However, in 2011 the qualification title was amended on the Ofqual register to the Cambridge English Level 7 Diploma In Teaching English to Speakers of Other Languages (Delta) in order to reflect that the wider range of students that teachers might have, including younger learners.

Oldham Sixth Form College is a government-funded college of further education in Oldham, Greater Manchester, England. Opened in 1992 as a specialist centre for advanced-level study, the Principal of the college is Jayne Clarke.

The National Extension College (NEC) was set up in 1963 as a not-for-profit organisation for distance learning for people of all ages. It was founded as a pilot study for the Open University.

Hamdan Bin Mohammed Smart University the first e-University in the United Arab Emirates, was inaugurated in February, 2009. The President of the University is the Crown Prince of Dubai, Sheikh Hamdan bin Mohammed bin Rashid Al Maktoum. The University was formerly known as e-TQM College which was established in 2002. Being the first e-learning institute in the U.A.E, its working model has paved the way for the Ministry of Higher Education and Scientific Research (MOHESR), UAE to design standards for accreditation for an e-learning institution. Hamdan Bin Mohammed Smart University (HBMSU) follows in its delivery of learning a blended learning. Specifically, blended learning in HBMSU refers when different delivery methods are combined together to deliver a particular course. These methods may include a mixture of face-to-face classrooms, online classrooms, and self-paced learning.

The Institute of Continuing Education (ICE) is a department of the University of Cambridge dedicated to providing flexible courses which allow adults of all ages, irrespective of previous educational attainment, to access higher education and obtain qualifications. It is the oldest continuing education department in the United Kingdom.

Dr Katharine Jewitt BA Hons, MA, MAODE, MSc HRM, MRES, MBA, MEd, FHEA, FRSA, FSET, CMALT is a Research Fellow in The Open University's Faculty for Science Technology Engineering and Mathematics, an independent Educational Technology and Management Consultant. She works as a lecturer at The Open University in the Faculty of Science, Technology, Engineering and Mathematics; Faculty of Wellbeing, Education and Language Studies; Faculty of Business and Law and The Centre for Inclusion and Collaborative Partnerships. She works for The Open University's Teaching and Learning Centre and International Development Office in a consulting capacity. She also works as a Mentor for FutureLearn and is a Producer Editor for OpenLearn. She is a School Governor and mentors staff to achieve Fellowship status for the Higher Education Academy. Jewitt teaches ESL in China. Previously, Jewitt was Director of Teaching, Learning, Curriculum and Quality at Prospects College of Advanced Technology and has held senior positions in industry, including DHL, Exel and Fujitsu.

Teaching English as a foreign language (TEFL) refers to teaching the English language to students with different first languages, typically used to imply that the English Language Learner may have already learned more than one language, prior to learning English. TEFL can occur either within the state school system or more privately, at a language school or with a tutor. TEFL can also take place in an English-speaking country for people who have immigrated there. TEFL teachers may be native or non-native speakers of English. Other acronyms are TESL, TESOL, and ESL. Students who are learning English as a second language are known as ESL or EFL students. More generally, these students are referred to as ELL students. Some of these terms are not in widespread use outside of the materials of providers of various programs and materials.