Thomas Richardson was a Scottish cartographer in the 18th century.

The "Manor" Map of 1771 now in the Museum of Richmond-upon-Thames bears the following inscription: "Plan of the Royal Manor of Richmond, otherwise West Sheen, in the county of Surry. Taken under the direction of Peter Burrell Esq. His Majesty's Surveyor General in the year 1771 by Thomas Richardson in York Street, Cavendish Square, London."

Tom Richmond may refer to:

Barry Richardson is a former Australian rules football player who played in the VFL between 1965 and 1974 for the Richmond Football Club.

Margaret Beauchamp was the daughter of Sir John Beauchamp, de jure 3rd Baron Beauchamp of Bletsoe, and his second wife, Edith Stourton. She was the maternal grandmother of Henry VII.

Kington is a village in Worcestershire, England. Situated near to Flyford Flavell, the earliest known recording of Kington in the Domesday Book under "cyne-turne" – the "King's farmstead".

Sir Thomas Browne was a Member of Parliament and Chancellor of the Exchequer. He was beheaded for treason on 20 July 1460.

Grangegorman is a suburb on the northside of Dublin city, Ireland. The area is administered by Dublin City Council. It was best known for decades as the location of St Brendan's Hospital, which was the main psychiatric hospital serving the greater Dublin region. The area is currently the subject of a major redevelopment plan under the aegis of the Grangegorman Development Agency, including the new Technological University Dublin campus.

The Dean of Kilmacduagh was the priest in charge of the Diocese's Cathedral, Kilmacduagh monastery. 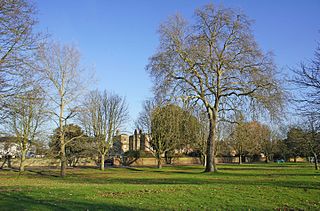 Sir George Browne was the eldest surviving son and heir of Sir Thomas Browne, beheaded 20 July 1460. He took part in Buckingham's rebellion, and was beheaded on Tower Hill on 4 December 1483.