Thomas Rosling Howlett (1827-1898) was a Baptist pastor and early proponent of British Israelism. He authored Anglo-Israel, the Jewish problem (1892) considered one of the most influential works on the British-Israel teaching. [1] [2]

British Israelism is a pseudoarchaeological belief that the people of the British Isles are "genetically, racially, and linguistically the direct descendants" of the Ten Lost Tribes of ancient Israel. With roots in the 16th century, British Israelism was inspired by several 19th-century English writings such as John Wilson's 1840 Our Israelitish Origin. Various British Israelite organisations were set up throughout the British Empire as well as in America from the 1870s; a number of these organisations are active independently as of the early 21st century. In America, the idea gave rise to the Christian Identity movement.

The Land of Israel, also known as the Holy Land or Palestine, is the birthplace of the Jewish people, the place where the final form of the Hebrew Bible is thought to have been compiled, and the birthplace of Judaism and Christianity. It contains sites sacred to Judaism, Samaritanism, Christianity, Islam, Druze and the Bahá'í Faith.

Menachem Begin was an Israeli politician, founder of Likud and the sixth Prime Minister of Israel. Before the creation of the state of Israel, he was the leader of the Zionist militant group Irgun, the Revisionist breakaway from the larger Jewish paramilitary organization Haganah. He proclaimed a revolt, on 1 February 1944, against the British mandatory government, which was opposed by the Jewish Agency. As head of the Irgun, he targeted the British in Palestine. Later, the Irgun fought the Arabs during the 1947–48 Civil War in Mandatory Palestine.

Lehi, often known pejoratively as the Stern Gang, was a Zionist paramilitary organization founded by Avraham ("Yair") Stern in Mandatory Palestine. Its avowed aim was to evict the British authorities from Palestine by resort to force, allowing unrestricted immigration of Jews and the formation of a Jewish state, a "new totalitarian Hebrew republic". It was initially called the National Military Organization in Israel, upon being founded in August 1940, but was renamed Lehi one month later. The group referred to its members as terrorists and admitted to having used terrorist attacks.

Zionism is the nationalist movement of the Jewish people that espouses the re-establishment of and support for a Jewish state in the territory defined as the historic Land of Israel. Modern Zionism emerged in the late 19th century in Central and Eastern Europe as a national revival movement, both in reaction to newer waves of antisemitism and as a response to Haskalah, or Jewish Enlightenment. Soon after this, most leaders of the movement associated the main goal with creating the desired state in Palestine, then an area controlled by the Ottoman Empire. 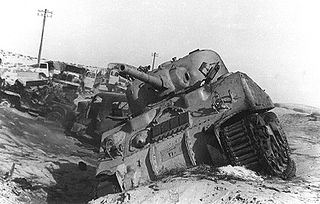 The Suez Crisis, or the Second Arab–Israeli war, also called the tripartite aggression in the Arab world and Sinai War in Israel, was an invasion of Egypt in late 1956 by Israel, followed by the United Kingdom and France. The aims were to regain Western control of the Suez Canal and to remove Egyptian president Gamal Abdel Nasser, who had just nationalized the canal. After the fighting had started, political pressure from the United States, the Soviet Union and the United Nations led to a withdrawal by the three invaders. The episode humiliated the United Kingdom and France and strengthened Nasser.

Aliyah is the immigration of Jews from the diaspora to the Land of Israel. Also defined as "the act of going up"—that is, towards Jerusalem—"making Aliyah" by moving to the Land of Israel is one of the most basic tenets of Zionism. The opposite action, emigration from the Land of Israel, is referred to in Hebrew as yerida ("descent"). The State of Israel's Law of Return gives Jews and their descendants automatic rights regarding residency and Israeli citizenship.

The Bene Israel, are a community of Jews in India. It has been suggested that it is made up of descendants of one of the disputed Lost Tribes and ancestors who had settled there centuries ago. In the 19th century, after the people were taught about normative (Ashkenazi/Sephardi) Judaism, they tended to migrate from villages in the Konkan area to the nearby cities, primarily Mumbai, but also to Pune, Ahmedabad, and Kolkata, India; and Karachi, in today's Pakistan. Many gained positions with the British colonial authority of the period. 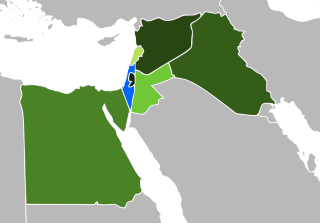 The Arab–Israeli conflict refers to the political tension, military conflicts and disputes between Arab countries and Israel, which climaxed during the 20th century. The roots of the Arab–Israeli conflict are attributed to the rise of Zionism and Arab nationalism towards the end of the 19th century, though the two national movements had not clashed until the 1920s. Part of the dispute arised from the conflicting claims to the land. Territory regarded by the Jewish people as their ancestral homeland is at the same time regarded by the Pan-Arab movement as historically and currently belonging to the Arab Palestinians, and in the Pan-Islamic context, as Muslim lands.

The Jordan Valley forms part of the larger Jordan Rift Valley. Unlike most other river valleys, the term "Jordan Valley" often applies just to the lower course of the Jordan River, from the spot where it exits the Sea of Galilee in the north, to the end of its course where it flows into the Dead Sea in the south. In a wider sense, the term may also cover the Dead Sea basin and the Wadi Arabah or Arava valley, which is the Rift Valley segment beyond the Dead Sea and ending at Aqaba/Eilat, 155 km (96 mi) farther south.

Anti-British sentiment is prejudice, fear or hatred against the British Government, the culture or the people of the United Kingdom, or its Overseas Territories.

Mandatory Palestine was a geopolitical entity established between 1920 and 1923 in the region of Palestine under the terms of the "Mandate for Palestine". 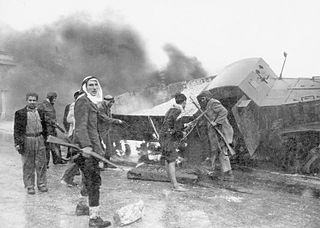 The 1947–1949 Palestine war, known in Israel as the War of Independence and in Arabic as The Nakba, was fought in the territory of Palestine under the British Mandate. It is the first war of the Israeli–Palestinian conflict and the broader Arab–Israeli conflict. During this war, the British Empire withdrew from Mandate Palestine, which had been a province (eyalet) of the Ottoman Empire prior to British occupation in 1917. The war culminated in the establishment of the State of Israel by the Jews, and saw the complete demographic transformation of Palestine, with the displacement of around 700,000 Palestinian Arabs and the complete destruction of their villages, towns and cities. The Palestinian Arabs ended up stateless, displaced either to the Palestinian territories captured by Egypt and Jordan or to the surrounding Arab states; many of them, as well as their descendants, remain stateless and in refugee camps. The territory, which was under British administration before the war was now divided between the State of Israel, which captured about 78% of the entire territory, the Kingdom of Jordan which captured and later annexed the area which would become the West Bank, and Egypt, which captured the Gaza Strip, a coastal territory on the shores of the Mediterranean Sea, in which it established the All-Palestine Government. 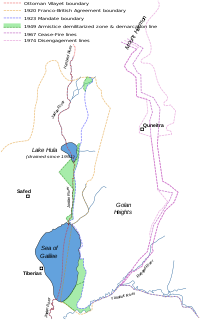 The Golan Heights are a rocky plateau in Western Asia that was captured by Israel from Syria in the 1967 Six-Day War. The international community widely considers the Golan Heights to be Syrian territory held by Israeli under military occupation. Following the war, Syria dismissed any negotiations with Israel as part of the Khartoum Resolution.