Thomas S. Johnson is an American banker. He was chairman and CEO GreenPoint Financial Corp. and GreenPoint Bank and since April 23, 2001; he served there from 1993 to 2004. He has chaired the Board of Trustees of the United States-Japan Foundation. He was president and director of Manufacturers Hanover Trust Co. and Manufacturers Hanover Corp. from 1989 to 1991. In 1st quarter 2009 he was named as non-executive chairman of the board at The Phoenix Cos. after serving on the board since 2000 Phoenix is based in Hartford CT (NYSE: PNX). [1]

Johnson graduated from Harvard in 1964 and continued by starting the Master of Business Management Program at Ateneo de Manila University. [1]

Craig R. Barrett is an American business executive who served as the chairman of the board of Intel Corporation until May 2009. He became CEO of Intel in 1998, a position he held for seven years. After retiring from Intel, Barrett joined the faculty at Thunderbird School of Global Management in Phoenix. 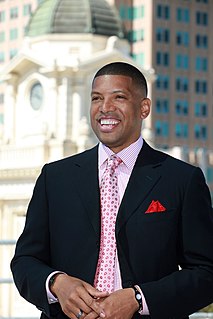 Kevin Maurice Johnson, nicknamed "KJ" is an American former professional basketball player and Democratic Party politician who served as the 55th Mayor of Sacramento, California from 2008 to 2016. He is the husband of educator Michelle Rhee. Elected in 2008 and re-elected in 2012, Johnson is the first African American to serve as Mayor of Sacramento. Before entering politics, Johnson was a professional basketball player in the National Basketball Association (NBA). After a stint with the Cleveland Cavaliers during a portion of his rookie year, the point guard played as a member of the Phoenix Suns for the remainder of his NBA career.

Aerojet Rocketdyne Holdings, Inc., formerly GenCorp, Inc., is an American technology-based manufacturer based in El Segundo, California. Established in 1915, it was formerly known as the General Tire and Rubber Company, becoming GenCorp in 1984, and adopting its current name in April 2015.

Ayala Corporation is the publicly listed holding company for the diversified interests of the Ayala Group. Founded in the Philippines by Domingo Róxas and Antonio de Ayala during the Spanish colonial rule, it is the country's oldest and largest conglomerate. The company has a portfolio of diverse business interests, including investments in retail, education, real estate, banking, telecommunications, water infrastructure, renewable energy, electronics, information technology, automotive, healthcare, and management and business process outsourcing. As of November 2015, it is the country's largest corporation in terms of assets ($48.7B).

The Tech, first published on November 16, 1881, is the campus newspaper at the Massachusetts Institute of Technology in Cambridge, Massachusetts. Editions are published on Thursdays throughout the academic year and about once a month over the summer. The Tech established an early presence on the World Wide Web, and continues to publish online in tandem with the print edition.

Ronald Allen Williams is an American businessman, entrepreneur and management consultant, and author of Learning to Lead: The Journey to Leading Yourself, Leading Others, and Leading an Organization. He is chairman and CEO of RW2 Enterprises, LLC. He is the former chairman, president and chief executive officer (CEO) of Aetna Inc., a diversified benefits company.

Delbert W. Yocam was a US technology executive. Yocam is a former chairman and CEO of Borland, former president, COO and director of Tektronix and a former Apple Computer executive. At Apple, during the 1980s, Yocam ran the Apple II group and later became Apple's first chief operating officer (COO). He served on the board of directors at Adobe Systems.

Award Software International Inc. was a BIOS manufacturer founded in 1983, by Rene Vishney and Bob Stillman in San Jose, California. In 1984 the company moved its international headquarters to Los Gatos, California, United States.

William "Bill" Doyle was the CEO of the Potash Corporation of Saskatchewan (PotashCorp), the world's largest fertilizer company by capacity. Doyle has served as CEO of PotashCorp since 1999. On April 6, 2014 Bill Doyle announced his intention to retire on July 1, 2015, and to transition from President and CEO to Senior Advisor on July 1, 2014, when he was succeeded by Jochen Tilk. 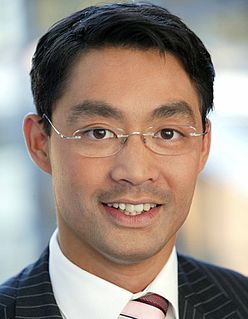 Philipp Rösler, is a German medical doctor and former politician who served as Federal Minister of Economics and Technology and Vice Chancellor of Germany from 2011 to 2013.

The 2010 Coke Zero 400 Powered by Coca-Cola, the 52nd running of the event, was a NASCAR Sprint Cup Series race held on July 3, 2010 at Daytona International Speedway in Daytona Beach, Florida as the 18th race – and official halfway point – of the 2010 NASCAR Sprint Cup Series season. It was scheduled to begin at 7:30 p.m. US EDT, but began at 9:24 US EDT due to a rain delay the race began. It was telecast on TNT and Motor Racing Network (terrestrial) and Sirius XM Radio (satellite) by radio at 6:30 p.m. EDT.

Duane J. Roth was Chief Executive Officer and member of the Board of CONNECT. He graduated from Iowa Wesleyan College.

Alec L. Poitevint II is a Georgia businessman and longtime official of the U.S. Republican Party (GOP). In February 2011, he was named by GOP Chairman Reince Priebus to manage the 2012 Republican National Convention, to be held in Tampa beginning on August 27, 2012. Poitevint replaces the team appointed by former RNC Chair Michael Steele, who Priebus fired immediately after his election as chairman in January 2011. Poitevint's official title of chairman of the Committee on Arrangements.

Stephan Weil is a German politician and the leader of the Social Democratic Party in Lower Saxony. On 20 January 2013, the SPD and the Green party won the 2013 Lower Saxony state election by one seat. On 19 February 2013, he was elected Minister President of Lower Saxony with the votes of SPD and Alliance '90/The Greens. From 1 November 2013 until 31 October 2014 he was President of the Bundesrat and ex officio deputy to the President of Germany. In November 2017, he was again elected Minister President with the votes of SPD and CDU.

Chris Viehbacher is a German-Canadian businessman. He served as the Chief Executive Officer of Sanofi and Chairman of Genzyme until 29 October 2014. Viehbacher is currently Managing Partner of Gurnet Point Capital, a healthcare venture capital and private equity fund backed by Ernesto Bertarelli and his family.

Peder Nicolas Paus is a Norwegian banker and investor in the petroleum industry. He is a co-founder and former chairman of the international oil and gas exploration company Questerre Energy Corporation.