Sowunmi was born in Nigeria to a Hungarian mother and a Nigerian Yoruba father and spent the first nine years of his life in the African state. [1] He started playing football aged 13 and began a professional football career with Dunaferr.

Sowunmi left for Vasas Budapest in 1998 but returned to his first club in 2001. He made his first appearance for Hungary in August 1999, in a 1–1 draw against Moldova. [2] Sowunmi was the first person of color to represent Hungary at football. [2] He spent a short spell in France with AC Ajaccio but returned to Hungary with Ferencvaros in 2003. He was signed by FC Slovacko in 2005 but after one season became involved in a dispute with the club. Eventually he was released from his attachment to the Czech team following police and FIFA intervention. [1]

Sowunmi signed for Scottish club Hibernian on 6 February 2007 after impressing manager John Collins while on trial. In just his second match he came on as a half-time substitute in a Scottish Cup quarter-final tie at Queen of the South and scored the decisive goal in a 2–1 win. Sowunmi was released by Hibernian in June, and Sowunmi re-signed for Vasas Budapest in September 2007. 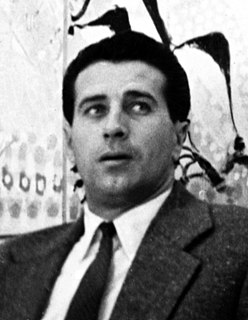 József Bozsik was a Hungarian footballer who played as a midfielder. He spent his entire club career at his hometown club, Budapest Honvéd. Bozsik was a key member of the legendary Golden Team as he represented Hungary in various international tournaments. Honvéd named their stadium, Bozsik József Stadion, after him.

Joseph Henry Baker was an England international footballer. Born in Woolton in Liverpool, England, he spent virtually his entire childhood growing up in Motherwell, Scotland. He is notable for being the first professional player to have played for England without having previously played in the English football league system, and for scoring over 100 goals in both the English and Scottish leagues. His brother Gerry Baker was also a professional footballer, who played internationally for the United States.

Paul Hartley is a Scottish professional football manager and former player who played as a midfielder. He is the manager of EFL League Two club Hartlepool United.

Simon Storey is an Australian footballer.

István Kozma is a former Hungarian footballer who played as a midfielder. 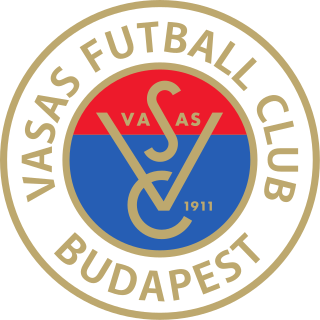 Vasas SC is one of Hungary's major sports clubs. Most of its facilities are situated in Budapest's 13th district in the north of the town. Members of the Hungarian Union of Iron Workers founded the club as Vas- és Fémmunkások Sport Clubja, the "Sport Club of Iron and Metal Workers", on 16 March 1911. The club colours are red and blue.

David Peter Gray is a Scottish former footballer and coach, who is currently the first-team coach of Hibernian. He represented Scotland at both under-19 and under-21 level.

Damon Ian Gray is an English footballer. He began his professional career with Scottish Premier League club Hibernian, and spent time on loan with Partick Thistle. Gray then played for Berwick Rangers for a season before moving to Sweden. He re-signed for Berwick in 2011 before moving to Kelty Hearts in July 2012.

Season 2006–07 was a mixed season for Hibernian; their league form suffered from extended cup runs, and they eventually finished sixth. The reward for their cup form was a first trophy in 16 years, thrashing Kilmarnock 5–1 in the final to lift the CIS Cup. Hibs were knocked out of the Scottish Cup in a semi-final replay by Dunfermline.

Udochukwu Nwoko is a retired professional footballer who last played for Cypriot Third Division side MEAP Nisou as a midfielder. Born in Nigeria, he represented the Malta national team. 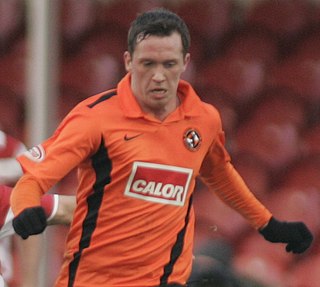 Daniel Joseph Swanson is a Scottish footballer who plays as an attacking midfielder for Scottish League One club East Fife.

Csaba László is a Romanian–Hungarian professional football manager and a former midfielder who last worked as the head coach of Indian Super League club Chennaiyin FC.

Zsolt Bárányos is a Hungarian football player who plays as a midfielder. He made most of his career in Hungary, playing for nine different clubs in two decades. Since July, 2013, he defends the colours of Budaorsi SC in third Hungarian division. 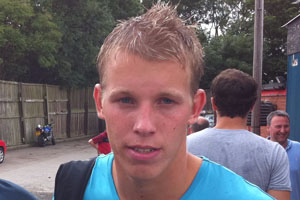 Dávid Attila Gróf is a Hungarian footballer who plays as a goalkeeper for Debrecen. Gróf started his senior career with Scottish club Hibernian, making one appearance during the 2008–09 season before being released from his contract. He subsequently played in England for Notts County, Tamworth, Mansfield Town and Walsall.

Ádám Bogdán is a Hungarian professional footballer, who plays as a goalkeeper for Hungarian club Ferencváros.

Omar Kolawole Olufemi Sowunmi is an English footballer who plays as a defender for National League club Bromley. Primarily a defender, Sowunmi has been used as a striker in the past.