Thomas William Thorburn (April 13, 1913 - March 13, 2003) was a Swedish economist, and Professor of Business Administration at the Stockholm School of Economics, known from his work on the "Supply and demand of water transport" (1960), [1] and the "Cost-benefit analysis in language planning" (1971). [2]

The Stockholm School of Economics is one of Europe's leading business schools. SSE offers BSc, MSc and MBA programs, along with highly regarded PhD- and Executive Education programs. SSE's Master program in Finance is ranked no.18 worldwide as of 2018. The Masters in Management program is ranked no. 12 worldwide by the Financial Times. QS ranks SSE no.26 among universities in the field of economics worldwide. The school is the only privately funded university in Sweden and is often considered as the most selective and prestigious academic institution in the Nordics.

Uddevalla is a town and the seat of Uddevalla Municipality in Västra Götaland County, Sweden. In 2010, it had a population of 31,212.

After his graduation Thorburn served his academic career at the Stockholm School of Economics, where he was Professor in Business Administration from 1961 to 1978. He was succeeded by Nils Brunsson.

Nils Gustav Magnus Brunsson is a Swedish organizational theorist, and Professor in Management at Uppsala University. He is most known for his works in the field of new institutionalism, such as "The organization of hypocrisy" (1989), "The reforming organization" (1993) and "A world of standards" (2010).

A tax is a mandatory financial charge or some other type of levy imposed upon a taxpayer by a governmental organization in order to fund various public expenditures. A failure to pay, along with evasion of or resistance to taxation, is punishable by law. Taxes consist of direct or indirect taxes and may be paid in money or as its labour equivalent. 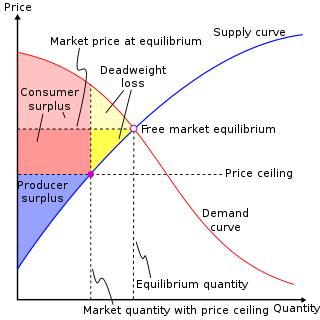 A deadweight loss, also known as excess burden or allocative inefficiency, is a loss of economic efficiency that can occur when equilibrium for a good or a service is not achieved. That can be caused by monopoly pricing in the case of artificial scarcity, an externality, a tax or subsidy, or a binding price ceiling or price floor such as a minimum wage.

Transport economics is a branch of economics founded in 1959 by American economist John R. Meyer that deals with the allocation of resources within the transport sector. It has strong links to civil engineering. Transport economics differs from some other branches of economics in that the assumption of a spaceless, instantaneous economy does not hold. People and goods flow over networks at certain speeds. Demands peak. Advance ticket purchase is often induced by lower fares. The networks themselves may or may not be competitive. A single trip may require the bundling of services provided by several firms, agencies and modes. 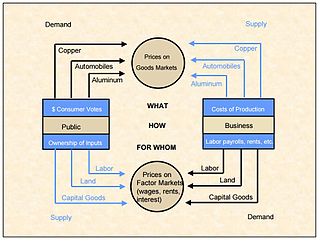 In ordinary usage, a price is the quantity of payment or compensation given by one party to another in return for one unit of goods or services.

Price elasticity of demand is a measure used in economics to show the responsiveness, or elasticity, of the quantity demanded of a good or service to a change in its price when nothing but the price changes. More precisely, it gives the percentage change in quantity demanded in response to a one percent change in price. 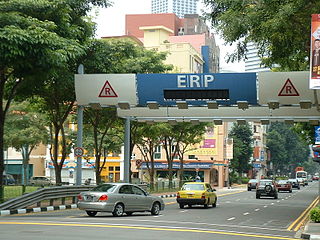 Congestion pricing or congestion charges is a system of surcharging users of public goods that are subject to congestion through excess demand such as higher peak charges for use of bus services, electricity, metros, railways, telephones, and road pricing to reduce traffic congestion; airlines and shipping companies may be charged higher fees for slots at airports and through canals at busy times. This pricing strategy regulates demand, making it possible to manage congestion without increasing supply.

The Incoterms or International Commercial Terms are a series of pre-defined commercial terms published by the International Chamber of Commerce (ICC) relating to international commercial law. They are widely used in international commercial transactions or procurement processes and their use is encouraged by trade councils, courts and international lawyers. A series of three-letter trade terms related to common contractual sales practices, the Incoterms rules are intended primarily to clearly communicate the tasks, costs, and risks associated with the global or international transportation and delivery of goods. Incoterms inform sales contracts defining respective obligations, costs, and risks involved in the delivery of goods from the seller to the buyer, but they do not themselves conclude a contract, determine the price payable, currency or credit terms, govern contract law or define where title to goods transfers.

Cost–benefit analysis (CBA), sometimes called benefit costs analysis (BCA), is a systematic approach to estimating the strengths and weaknesses of alternatives. It is used to determine options which provide the best approach to achieving benefits while preserving savings. A CBA may be used to compare potential courses of actions, or to estimate the value against the cost of a decision, project, or policy. It is commonly used in commercial transactions, business or policy decisions, and project investments.

In economics, tax incidence or tax burden is the effect of a particular tax on the distribution of economic welfare. The introduction of a tax drives a wedge between the price consumers pay and the price producers receive for a product, which typically imposes an economic burden on both producers and consumers. The concept was brought to attention by the French Physiocrats, in particular François Quesnay, who argued that the incidence of all taxation falls ultimately on landowners and is at the expense of land rent. Tax incidence is said to "fall" upon the group that ultimately bears the burden of, or ultimately has to pay, the tax. The key concept is that the tax incidence or tax burden does not depend on where the revenue is collected, but on the price elasticity of demand and price elasticity of supply.

Partial equilibrium is a condition of economic equilibrium which takes into consideration only a part of the market, ceteris paribus, to attain equilibrium.

Tax shift or Tax swap is a change in taxation that eliminates or reduces one or several taxes and establishes or increases others while keeping the overall revenue the same. The term can refer to desired shifts, such as towards Pigovian taxes as well as undesired shifts, such as a shift from multi-state corporations to small businesses and families.

Public economics is the study of government policy through the lens of economic efficiency and equity.

In economics, the Laffer curve illustrates a theoretical relationship between rates of taxation and the resulting levels of government revenue. It illustrates the concept of taxable income elasticity—i.e., taxable income changes in response to changes in the rate of taxation. The Laffer curve assumes that no tax revenue is raised at the extreme tax rates of 0% and 100%, and that there is a rate between 0% and 100% that maximizes government taxation revenue. The Laffer curve is typically represented as a graph that starts at 0% tax with zero revenue, rises to a maximum rate of revenue at an intermediate rate of taxation, and then falls again to zero revenue at a 100% tax rate. However, the shape of the curve is uncertain and disputed among economists. Under some assumptions, such as revenue being a continuous function of the rate of taxation, the maximum illustrated by the Laffer curve is a result of Rolle's theorem, which is a standard result in calculus.