Thomas Turino (born December 12, 1951) is an American ethnomusicologist and author of several textbooks in the field, most notably the popular introductory book Music as Social Life: The Politics of Participation. [1] His interests include the growth of nationalism through music [2] [3] [4] [5] and the role that music plays in creating the connections that define a society. [6]

An intellectual is a person who engages in critical thinking, research, and reflection about the reality of society, and who proposes solutions for the normative problems of society. Coming from the world of culture, either as a creator or as a mediator, the intellectual participates in politics, either to defend a concrete proposition or to denounce an injustice, usually by either rejecting or producing or extending an ideology, and by defending a system of values.

The music of Nigeria includes many kinds of folk and popular music, styles of folk music are related to the multitudes of ethnic groups in the country, each with their own techniques, instruments, and songs. Little is known about the country's music history prior to European contact, although bronze carvings dating back to the 16th and 17th centuries have been found depicting musicians and their instruments. The country's most internationally renowned genres are Indigenous, Apala, Fuji, Jùjú, Afrobeat, Afrobeats, Igbo Highlife, Afro-juju, Waka, Igbo rap, Yo-pop, Gospel. The largest ethnic groups are the Igbo, Hausa and Yoruba. Traditional music from Nigeria and throughout Africa is almost always functional; in other words, it is performed to mark a ritual such as the wedding or funeral and not to achieve artistic goals. Although some Nigerians, especially children and the elderly, play instruments for their own amusement, solo performance is otherwise rare. Music is closely linked to agriculture, and there are restrictions on, for example, which instruments can be played during different parts of the growing season.

Thomas Tafirenyika Mapfumo is a musician nicknamed "The Lion of Zimbabwe" and "Mukanya" for his immense popularity and for the political influence he wields through his music, including his sharp criticism of the government of former Zimbabwean president Robert Mugabe. He both created and made popular Chimurenga music, and his slow-moving style and distinctive voice is instantly recognisable to Zimbabweans.

The Hausa are one of the largest ethnic groups in Nigeria, Niger, Ghana, Sudan, Cameroon and in many West and Central African countries. Their folk music has played an important part in the development of Nigerian music, contributing such elements as the Goje, a one-stringed fiddle. There are two broad categories of traditional Hausa music: rural folk music and urban court music. They introduced the African pop culture genre that is still popular today. 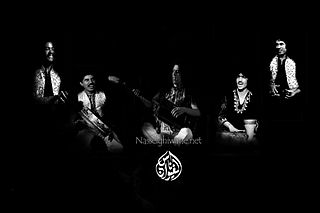 Nass El Ghiwane are a musical group established in 1970 in Casablanca, Morocco. The group, which originated in avant-garde political theater, has played an influential role in Moroccan chaabi. Nass El Ghiwane were the first band to introduce Western instruments like the modern banjo. Their music incorporates a trance aesthetic, reflecting the influence of local Gnawa music. Their music is inspired by ancient North African Sufi poetry, most prominently that of Abderrahman El Majdoub, whose work was a direct inspiration to the band. They are also credited for helping bring a new social movement to Morocco.

Ejigayehu Shibabaw, known by her stage name Gigi, is an Ethiopian singer. She has performed the music of Ethiopia in combination with a wide variety of other genres, often in collaboration with her husband Bill Laswell, a bassist and producer.

Bembeya Jazz National is a Guinean jazz group that gained fame in the 1960s for their Afropop rhythms. They are considered one of the most significant bands in Guinean music. Many of their recordings are based on traditional folk music in the country and have been fused with jazz and Afropop style. Featuring guitarist Sekou "Diamond Fingers" Diabaté, who grew up in a traditional griot musical family, the band won over fans in Conakry, Guinea's capital city, during the heady days of that country's newfound independence. Bembeya Jazz fell onto harder times in the 1980s and disbanded for a number of years, but reformed in the late 1990s and toured Europe and North America in the early 2000s.

Yoruba music is the music of the Yoruba people of Nigeria, Togo, and Benin. It is perhaps best known for its extremely advanced drumming tradition, especially using the dundun hourglass tension drums. Yoruba folk music became perhaps the most prominent kind of West African music in Afro-Latin and Caribbean musical styles; it left an especially important influence on the music used in Santería practice and the music of Cuba. For a comprehensive discussion of Yoruba music, see Bode Omojola's book, Yoruba Music in the Twentieth Century.

Afropop Worldwide is a radio program that presents the musics of Africa and the African diaspora. The program is produced by Sean Barlow for World Music Productions in Brooklyn, New York City, New York. It is hosted by the veteran Cameroonian broadcaster Georges Collinet, who previously attained renown for his work with Voice of America.

David Hinds is a British musician and the founding member, rhythm guitarist and lead vocalist for the reggae band Steel Pulse.

Timbalada is an Afro-Brazilian musician group from Candeal, Salvador, Brazil. It was founded by drummer Carlinhos Brown, and the composer and percussionist Tony Mola. The musical style is between samba reggae and axé, with strong influences from African music. They are a highly popular group which regularly performs sold-out concerts throughout Brazil.

Ramazani "Remmy" Mtoro Ongala was a Tanzanian guitarist and singer. Ongala was born in Kindu near the Tanzanian border, in what was the Belgian Congo at the time, and now is the Democratic Republic of the Congo.

Tropical music is a term in the Latin music industry that refers to music genres deriving from or influenced by the Spanish-speaking areas of the Caribbean. It includes the islands of Cuba, Puerto Rico, The Dominican Republic, and the Caribbean coastal regions of Colombia and Venezuela.

Mokoomba is a Zimbabwean musical group, originally from Chinotimba township, Victoria Falls, Zimbabwe. The group sings in a number of languages including English, Luvale, Tonga, Nyanja, Ndebele and Shona. Mokoomba takes its name from a Tonga word that connotes deep respect for the Zambezi river and the vibrant life along its banks.