Thomas Emanuel Ulimwengu (born 14 June 1993) is a Tanzanian football striker who is currently playing as a striker for JS Saoura in the Algerian Ligue Professionnelle 1 and the Tanzania national football team. [1]

Ulimwengu grew up in Dodoma, the Tanzanian capital, where he played for local club team Area C. At the age of 14 he was selected for the Dodoma Region U-17 team. Soon after, he was selected through a nationwide talent search to join the first class of the Tanzania Soccer Academy, a joint project between the Tanzania Football Federation and British investors.

Ulimwengu impressed at the soccer academy and was soon called up to the Tanzania U-17 national team. He was joint top scorer in the 2009 CECAFA U-17 Championship, in which Tanzania finished 2nd. After his good performance in the competition, he was regularly called up by coach Marcio Maximo to practice with the senior national team, the Taifa Stars.

In the 2009/2010 Tanzania Premier League season Ulimwengu played on-loan for Moro United. The following summer, he represented Tanzania in the 2010 Copa Coca-Cola African Championship in South Africa, [2] where he scored nine goals in five matches. [3]

In July 2010 Thomas joined Swedish development outfit Athletic Football Club, with whom he competed in the Gothia Cup and Stockholm Cup. [4] He trained with the club for one year while waiting for eligibility to sign for a senior team.

After Ulimwengu's 18th birthday in the summer of 2011, there was much speculation as to where he would sign for the 2011–12 football season, and the striker was linked to a number of clubs including TP Mazembe in the DR Congo Premier League, AS Monaco in Ligue 1 and Hamburger SV in the Bundesliga.

Having represented Tanzania many times at the U-17 and U-20 levels, Ulimwengu made his senior debut for Tanzania as a substitute in the opening match of the CECAFA Senior Challenge Cup against Zambia. [6] He made his first start for the national team in the following match against Burundi, but sustained an injury in that match and had to sit out the rest of the tournament. Tanzania went on to win the competition, and were 2011 CECAFA Champions.

In the spring of 2011, Ulimwengu returned from Sweden to join up with the Tanzanian Olympics team in their 2012 Olympic qualifiers. He scored crucial goals in both their 2–1 loss away against Cameroon, and their 2–1 victory against Cameroon in the return leg. Tanzania knocked Cameroon out on penalties and were drawn against Nigeria for their next qualifying match. [7] In June 2011 Ulimwengu played in the Olympic qualifier against 2008 Olympic silver medalists Nigeria. He scored in the 85th minute of the match to lead Tanzania to a 1–0 victory. But Tanzania lost to Nigeria in the return leg on 18 June 2011, and were knocked out of Olympic Qualifiers. [8]

Since 2011, Ulimwengu has been a key member of the Tanzanian National Team, playing in all important matches and tournaments.

Ulimwengu played a crucial role in Tanzania's promising but ultimately unsuccessful 2014 World Cup Qualification campaign. He scored critical goals against both Morocco and Ivory Coast. He went on to win the "Goal of the Year" award for his goal against Ivory Coast in the Tanzanian Football Awards.

Thomas has been described as a quick, balanced, highly skilful and powerful striker. He possesses excellent ball control, and positioning, he is capable of beating defenders in one on one situations as well as creating space for teammates. He possesses a great shot from any distance, superb vision and fantastic passing and dribbling ability. Notably creating assists for a fellow player Mbwana Samatta. He threatened the defence of Morocco national team creating assists for a fellow striker Mbwana Samatta and successful beating Morocco 3–1 in 2014 world cup qualification campaigns in Dar es salaam Tanzania.

He is currently residing in Sweden

The Tunisia national football team, represents Tunisia in men's international association football since their maiden match in 1957. It is governed by the Tunisian Football Federation, founded in 1957 after the Tunisian independence in 1956. Tunisia are colloquially known as Les Aigles de Carthage. The team's colours are red and white, and the Bald eagle its symbol, Periods of regular Tunisian representation at the highest international level, from 1962 to 1978, from 1994 to 2008 and again from 2014 onwards, Most of Tunisia's home matches are played at the Stade Olympique de Radès in Radès since 2001, The team represents both FIFA and Confederation of African Football (CAF). 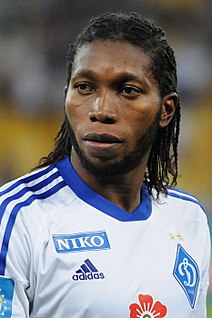 Trésor Mputu Mabi is a Congolese football midfielder and striker who plays for TP Mazembe and the Democratic Republic of the Congo national football team.

Alain Kaluyituka is a DR Congo association football player who is currently playing as a forward. He has represented his country Congo DR 30 times, scoring 9 times. He has also represented his former club TP Mazembe in International football in both CAF Champions League and the FIFA Club World Cup.

Deo Kanda A Mukok is a Congolese footballer who plays for Tanzanian club Simba as a forward.

Hamis "Diego" Kiiza is a Ugandan professional footballer who plays for Vipers SC in Uganda. 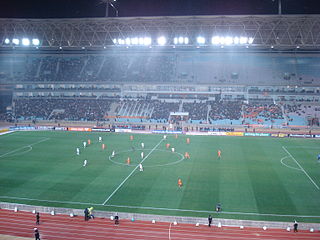 The 2013 CECAFA Cup was the 37th edition of the annual CECAFA Cup, an international football competition consisting of the national teams of member nations of the Council for East and Central Africa Football Associations (CECAFA). The tournament was held in Kenya from 27 November to 12 December.

The 2013 CECAFA Cup Final was a football match that took place on Thursday, 12 December 2013 at the Nyayo National Stadium in Nairobi to coincide with Kenya's 50th Jamhuri Day celebrations. It was contested by the hosts Kenya and Sudan to determine the winner of the 2013 CECAFA Cup.

Isaac Isinde is a Ugandan footballer who currently plays for TRAU in I-League as a centre-back. He started playing football at Jinja Senior Secondary School, an Eastern Uganda Sports giant; where he was a regular fixture. He has won 4 Ethiopian Premier League titles and 2 Ethiopian FA Cups in his 5 years with Saint George.

Nicholas Wadada Wakiro is a professional footballer who plays as a right-back for Azam F.C. of Tanzania and the Uganda national team. 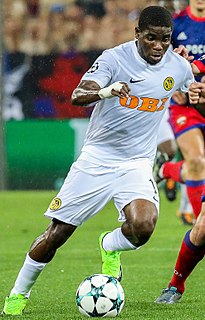 Mbwana Ally Samatta is a Tanzanian professional footballer who plays as a striker for English club Aston Villa and the Tanzania national team.

Mohammed Muntari Tagoe, is a Ghanaian footballer who plays for Kumasi Asante Kotoko F.C. of the Ghana Premier League and was playing for Ghana U20 | Ghana U23 as a goalkeeper. Tagoe comes from Accra in the Greater Accra Region of Ghana.

Adama Traoré is a Malian professional footballer who plays for Saudi Professional League club Al-Adalah, on loan from Metz, and the Mali national team as a winger.