Thomas "Fat" Walsh (died March 4 or 7, 1929) [1] was a New York mobster involved in narcotics and an associate of Dutch Schultz and Charles "Lucky" Luciano. He was taken in for questioning along with Luciano and George Uffner regarding the 1928 gangland slaying of Arnold Rothstein, of whom he was a former bodyguard with Jack "Legs" Diamond, however he and the others were later released. He was later killed at the Miami Biltmore Hotel in Coral Gables, Florida [2] during a gambling dispute on March 4, 1929. [3] [4]

It has been claimed that his ghost haunts the hotel elevator, doors opening and closing and lights blinking on and off. [5]

Alphonse Gabriel Capone, sometimes known by the nickname "Scarface", was an American gangster and businessman who attained notoriety during the Prohibition era as the co-founder and boss of the Chicago Outfit. His seven-year reign as a crime boss ended when he went to prison at the age of 33. 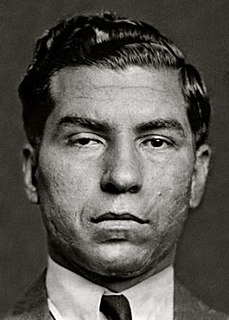 Charles "Lucky" Luciano was an Italian-born gangster who operated mainly in the United States. Luciano started his criminal career in the Five Points gang and was instrumental in the development of the National Crime Syndicate. Luciano is considered the father of modern organized crime in the United States for the establishment of The Commission in 1931, after he abolished the boss of bosses title held by Salvatore Maranzano following the Castellammarese War. He was also the first official boss of the modern Genovese crime family. 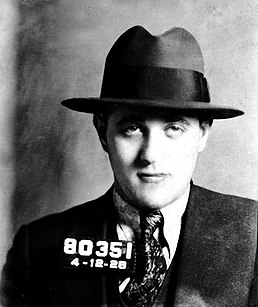 Benjamin "Bugsy" Siegel was an American mobster who was a driving force behind the development of the Las Vegas Strip. Siegel was not only influential within the Jewish Mob, but along with his childhood friend and fellow gangster Meyer Lansky, also held significant influence within the Italian-American Mafia and the largely Italian-Jewish National Crime Syndicate. Described as handsome and charismatic, he became one of the first front-page celebrity gangsters. 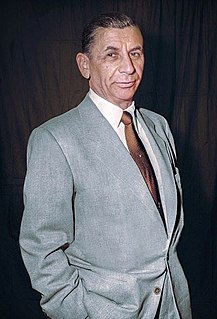 Meyer Lansky, known as the "Mob's Accountant," was an American organized crime figure who, along with his associate Charles "Lucky" Luciano, was instrumental in the development of the National Crime Syndicate in the United States.

Salvatore Maranzano was an Italian-American mobster from the town of Castellammare del Golfo, Sicily, and an early Cosa Nostra boss who led what later would become the Bonanno crime family in New York City. He instigated the Castellammarese War in 1930 to seize control of the American Mafia, winning the war after the murder of rival faction head Joe Masseria in April 1931. He then briefly became the Mafia's capo di tutti capi and formed the Five Families in New York City, but was murdered on September 10, 1931, on the orders of Charles "Lucky" Luciano, who established an arrangement in which families shared power to prevent future turf wars: The Commission. 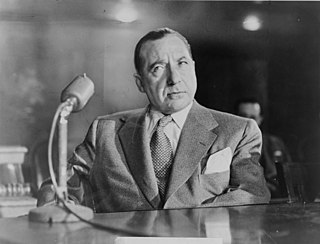 Frank Costello was an Italian-American crime boss of the Luciano crime family. In 1957, Costello survived an assassination attempt ordered by Vito Genovese and carried out by Vincent Gigante. However, the altercation persuaded Costello to relinquish power to Genovese and retire. Costello died on February 18, 1973.

A gangster is a criminal who is a member of a gang. Most gangs are considered to be part of organized crime. Gangsters are also called mobsters, a term derived from mob and the suffix -ster. Gangs provide a level of organization and resources that support much larger and more complex criminal transactions than an individual criminal could achieve. Gangsters have been active for many years in countries around the world. Gangsters are the subject of many novels, films, television series and video games. Arnold Rothstein, nicknamed "The Brain", was an American racketeer, crime boss, businessman, and gambler in New York City. Rothstein was widely reputed to have organized corruption in professional athletics, including conspiring to fix the 1919 World Series. He was also a mentor of future crime bosses Lucky Luciano, Meyer Lansky, Frank Costello, and numerous others.

Vito Genovese was an Italian-born American mobster who mainly operated in the United States. Genovese rose to power during Prohibition as an enforcer in the American Mafia. A long-time associate and childhood friend of Lucky Luciano, Genovese took part in the Castellammarese War and helped shape the rise of the Mafia and organized crime in the United States. He would later lead Luciano's crime family, which was renamed the Genovese crime family in his honor.

The Arizona Biltmore Hotel is a resort located in Phoenix near 24th Street and Camelback Road. It is part of Hilton Hotels' Waldorf Astoria Hotels and Resorts. It was featured on the Travel Channel show Great Hotels. The Arizona Biltmore has been designated as a Phoenix Point of Pride.

The Castellammarese War was a bloody power struggle for control of the Italian-American Mafia that took place in New York City, New York, from February 1930 until April 15, 1931, between partisans of Joe "The Boss" Masseria and those of Salvatore Maranzano. The war was named after the Sicilian town of Castellammare del Golfo, the birthplace of Maranzano. Maranzano's faction won and divided New York's crime families into the Five Families; Maranzano declared himself capo di tutti i capi. However, Maranzano was murdered in September 1931 on orders of Lucky Luciano, who established a power-sharing arrangement called the Commission, a group of Mafia families of equal stature, to avoid such wars in the future.

Vincent "Mad Dog" Coll was an Irish-American mob hitman in the 1920s and early 1930s in New York City. Coll gained notoriety for the allegedly accidental killing of a young child during a mob kidnap attempt.

Asa Griggs Candler was an American business tycoon and politician who in 1888 purchased the Coca-Cola recipe for $238.98 from chemist John Stith Pemberton in Atlanta, Georgia. Candler founded The Coca-Cola Company in 1892 and developed it as a major company. 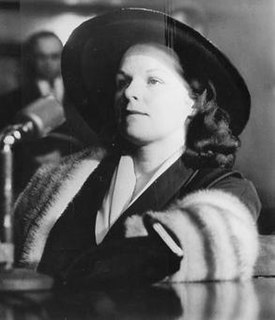 Virginia Hill was an American organized crime figure. An Alabama native, she became a Chicago outfit courier during the mid-1930s. She was famous for being the girlfriend of mobster Bugsy Siegel.

The New York Biltmore Hotel was a luxury hotel in New York City that opened in 1913. It was one a series of palatial hotels built as part of the Terminal City development around Grand Central Terminal in Midtown Manhattan. The others included The Commodore, The Roosevelt and The Barclay. The building was gutted by developers in 1981, stripped down to its steel frame and converted to an office building known first as Bank of America Plaza and more recently as 335 Madison.

The Five Families is the organization of the five major New York City organized crime families of the Italian-American Mafia formed in 1931 by Salvatore Maranzano following his victory in the Castellammarese War. 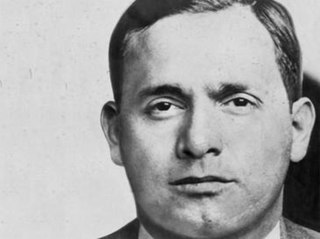 Thomas Gaetano Lucchese, sometimes known by the nicknames "Tommy", "Thomas Luckese", "Tommy Brown" or "Tommy Three-Finger Brown" was an Italian-American gangster and founding member of the Mafia in the United States, an offshoot of the Cosa Nostra in Sicily. From 1951 until 1967, he was the boss of the Lucchese crime family, one of the Five Families that dominate organized crime in New York City.

Jewish-American organized crime initially emerged within the American Jewish community during the late 19th and early 20th centuries. It has been referred to variously in media and popular culture as the Jewish Mob, Jewish Mafia, Kosher Mob, Kosher Mafia, and Kosher Nostra or Undzer Shtik. The last two of these terms are direct references to the Italian Cosa Nostra; the former is a play on the word for kosher, referring to Jewish dietary laws, while the latter is a calque of the Italian phrase Cosa Nostra into Yiddish, which was at the time the predominant language of the Jewish diaspora in the United States.

Oriental Park Racetrack in Marianao, Havana, Cuba, was a thoroughbred horse-racing facility operated during the winter by the Havana-American Jockey Club of Cuba. Founded in 1915, Oriental Park was the only race track in Cuba in the days before Fidel Castro came to power in 1959.