Thomas Wendell McVay (November 5, 1915 - October 3, 1982), also known as "Cotton" McVay, was mayor of Lake Wales, Florida, United States between the years of 1953 and 1954. During this time he was instrumental in bringing the Passion Play to Lake Wales.

Born in Eastman, Georgia, Cotton moved to Lake Wales around the age of nine. The family resided on Central Avenue, and Cotton's father owned a hardware store during the pioneering days of the town. Cotton and his older brothers went on to graduate from Lake Wales High School and went into the military during World War II. In 1942, he married Eva White of Bartow, and together they had one child, Eva Jane, in 1950. McVay died on October 3, 1982 at the age of 66. [1]

Lake Wales is a city in Polk County, Florida, United States. The population was 14,225 at the 2010 census. As of 2018, the population estimated by the U.S. Census Bureau is 16,577. It is part of the Lakeland–Winter Haven Metropolitan Statistical Area. Lake Wales is located in central Florida, west of Lake Kissimmee and east of Tampa.

Robert Shane Kimbrough is a retired United States Army officer, and a NASA astronaut. He was part of the first group of candidates selected for NASA astronaut training following the Space Shuttle Columbia disaster. Kimbrough is a veteran of two spaceflights, the first being a Space Shuttle flight, and the second being a 6-month mission to the ISS on board a Russian Soyuz craft. He was the commander of the International Space Station for Expedition 50, and returned to Earth in April 2017. Married to the former Robbie Lynn Nickels.

The Wendell Baker Story is a 2005 American comedy film directed by Luke Wilson and Andrew Wilson and starring Luke Wilson, Eva Mendes, Owen Wilson, Eddie Griffin, Kris Kristofferson, Harry Dean Stanton, Seymour Cassel, and Will Ferrell. It premiered at the 2005 South by Southwest Film Festival in Austin, Texas, in March 2005. It is the final film produced by Franchise Pictures. 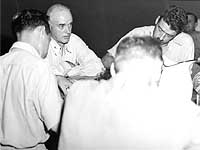 Charles Butler McVay III was an American naval officer and the commanding officer of the cruiser USS Indianapolis when she was lost in action in 1945, resulting in a significant loss of life. Of all captains in the history of the United States Navy, he is the only one to have been subjected to court-martial for losing a ship sunk by an act of war, despite the fact that he was on a top secret mission maintaining radio silence. After years of mental health problems, he took his own life aged 70 years. Following years of efforts by some survivors and others to clear his name, McVay was posthumously exonerated by the 106th United States Congress and President Bill Clinton on October 30, 2000.

Greased Lightning is a 1977 American biographical film starring Richard Pryor, Beau Bridges, and Pam Grier, and directed by Michael Schultz. The film is loosely based on the true life story of Wendell Scott, the first African American NASCAR race winner and 2015 NASCAR Hall of Fame inductee.

John Edward McVay is a former American football coach who rose through the coaching ranks from high school, through the college level, and to the National Football League (NFL). Born in Bellaire, Ohio, he played college football at Miami University, starring as a center.

Sweet Dreams was a British vocal trio composed of Carrie Gray, Helen Kray and Bobby McVay. This teen trio represented the UK in the Eurovision Song Contest 1983 with the song "I'm Never Giving Up". 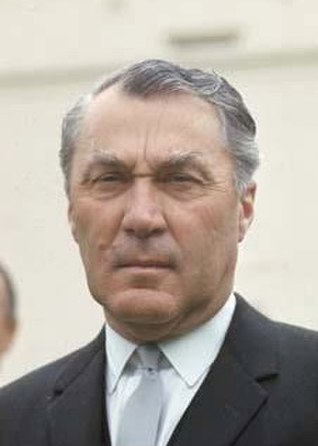 Robert (Bobby) McVay is a British singer and radio broadcaster. 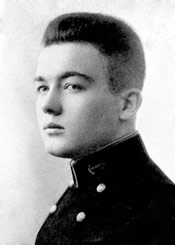 Rear Admiral Thomas John Ryan, Jr. was a career American naval officer who received the Medal of Honor, the United States' highest military decoration, for his actions while in Yokohama, Japan during the 1923 Great Kantō earthquake. Ryan went on to serve in World War II as a destroyer flotilla commander.

Robert Brewer is a former American football player. He played quarterback for the University of Texas Longhorns during the 1981 and 1982 season. He is the last walk-on quarterback to start for Texas and the last to start in the Cotton Bowl. His most memorable moment was the late touchdown he scored against Alabama to guide Texas to a 1982 Cotton Bowl Classic win. He is also the younger member of the only father-son combination to start at quarterback for Texas. Both father and son led Longhorn teams to victory over Bear Bryant coached teams.

Sean McVay is an American football coach who is the head coach of the Los Angeles Rams of the National Football League (NFL). He previously served as the offensive coordinator of the Washington Redskins from 2014 to 2016. Upon his hiring by the Rams in 2017, at the age of 30, McVay became the youngest head coach in modern NFL history. In his second year with the team, McVay took the Rams to Super Bowl LIII, becoming the youngest coach ever to do so and earning him the AP NFL Coach of the Year award.

McVay may refer to:

The Cotton Plantation Record and Account Book is a best-selling and pioneering guide to farm accounting in the antebellum cotton-producing regions of the United States. It was first published in 1847 or 1848 by Thomas Affleck (1812-1868), a Scottish immigrant and owner of the Glenblythe Plantation in Gay Hill, Washington County, Texas. The book contains a detailed system, including blank tables to be filled in, that allowed plantation owners to track the efficiency of their production. It also includes essays on various aspects of plantation management, such as the proper care and discipline of slaves.

USS Indianapolis: Men of Courage is a 2016 American war disaster film directed by Mario Van Peebles and written by Cam Cannon and Richard Rionda Del Castro, based largely on the true story of the loss of the ship of the same name in the closing stages of the Second World War. The film stars Nicolas Cage, Tom Sizemore, Thomas Jane, Matt Lanter, Brian Presley, and Cody Walker. Principal photography began on June 19, 2015 in Mobile, Alabama. The film premiered in the Philippines on August 24, 2016. It was released as a digital rental on iTunes and Amazon in the United States on October 14, 2016 and in limited theaters during the Veterans Day weekend.

Cory Littleton is an American football inside linebacker for the Los Angeles Rams of the National Football League (NFL). He played college football at Washington. He signed with the Rams as an undrafted free agent in 2016.