Thomas White (born 30 April 1984) is an English, Brighton-based songwriter, singer, musician, producer and visual artist. Along with their brother, Alex, they form the nucleus of psych-pop band The Electric Soft Parade. To date, they have released four albums and a six-track EP. They also contributes vocals and guitar to cult Brighton super-group Brakes, and drums and bass to Restlesslist and Clowns respectively.

Besides performing solo and in their own groups, White regularly appears as a session player for, among others, Patrick Wolf, British Sea Power, Levellers and Sparks.

Educated at Davigdor Infants, Somerhill Juniors and Hove Park schools, they began learning the piano at the age of five, picking up the violin a year later and teaching themself guitar, drums and clarinet in their early teens. White formed their first band (Fixed Ascent, later The Feltro Media) at the age of 13, with their brother, Alex, and school-friend Alistair Gavan (later of Diomedes, Sparrow and Villareal). They signed their first record deal (with DB Records) whilst still 16 and studying for their GCSEs.

"I Dream of Black"

June 2008 saw the release of their debut solo album, I Dream of Black. Recorded entirely on cassette four-track, the album was considered extremely lo-fi by both fans and critics alike.[ citation needed ]

A follow-up, 'The Maximalist' (Cooking Vinyl) arrived in March 2010. Whilst still played, recorded and mixed by White themself, the album features a markedly more complex, hi-fi sound, and a sleeve designed by the American artist, Keith Boadwee. [1] The album was released to generally positive reviews, with Uncut magazine awarding four stars, stating:

"The Maximalist opens the dam of ostensibly conflicting styles and releases the deluge in all its crazily self-confident, so-wrong-it's-right glory. White fuses elements of The Who, Chicago, My Bloody Valentine, Queens Of The Stone Age, Badalamenti and Badfinger, which is not just a feat of cut-and-paste engineering, but also proof of his verve, vivid imagination and fervent love of music."

Tour dates to support the album have varied from full-on rock shows with a five-piece band, intimate cabaret performances, often featuring a number of cover versions ("I'll See You in My Dreams" and "You Can Have Him (I Don't Want Him)", among others) to festival dates with an expanded 13-piece line-up, featuring a choir dressed in psychedelic robes.

On 26 March 2011, White streamed their third solo album for free via YouTube. Entitled 'Yalla!" (Egyptian Arabic for 'let's go') the album was written and recorded over two weeks in the small town of Dahab, South Sinai. Featuring only acoustic guitar and vocal, the album details the limbo at the end of a long relationship compared to that of moving to a foreign country, making myriad references to the sea, shorelines, water, the sun, colours, the weather, travel and nature. All accompanying videos feature footage taken in Brighton, Dahab and Cairo. "Yalla!" was released physically in the UK and digitally worldwide by Bleeding Heart Recordings in March 2012. [2] 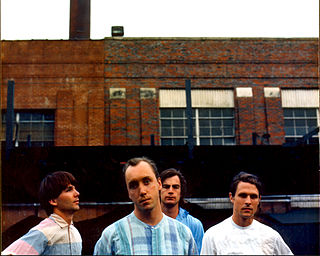 Love Tractor (1980–current) is a band from Athens, Georgia, founded in spring 1980 by guitarists Mark Cline and Mike Richmond, and bassist Armistead Wellford, students at the University of Georgia. Like The B-52's, Pylon and R.E.M., Love Tractor has been lauded by critics and music historians as one of the founders of the Athens, Georgia, alternative rock scene. Love Tractor toured extensively and recorded six critically acclaimed albums, consistently topping the college and alternative charts. Love Tractor was particularly known for their instrumental rock.

Virgin Prunes were an Irish post-punk band formed in 1977 in Dublin, Ireland. They disbanded in 1986 after the departure of singer Gavin Friday. The other members continued under the name The Prunes until they split up in 1991.

Cooking Vinyl is a British independent record label, based in Acton, London, England. Founded in 1986 by former manager and booking agent Martin Goldschmidt and business partner Pete Lawrence. Goldschmidt remains the current owner and chairman, while Rob Collins is managing director. The company focuses on artist service-based deals where the artist retains ownership of their copyrights.

The Electric Soft Parade are an English psychedelic pop band from Brighton, comprising brothers Alex and Thomas White, the creative core of the band, as well as a number of other musicians with whom they record and perform live, most recently including Andrew Mitchell and Damo Waters, as well as long-standing bass/keyboard player, Matthew Twaites.

American Music Club was an American, San Francisco-based indie rock band, led by singer-songwriter Mark Eitzel. Formed in 1983, the band released seven albums before splitting up in 1995. They reformed in 2003 and released two further albums. 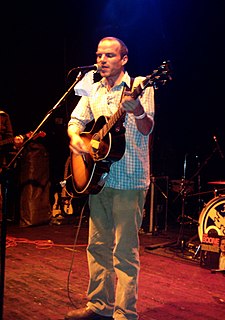 Eamon Hamilton is frontman of Brakes and formerly played keyboards for Sea Power.

Formed in 1996 by Damien Paris, Andrew Totolos and Tim Kent, The Giraffes are an active hard rock band from New York City. In 2001 Singer Aaron Lazar joined the band and was with them till 2011, until he took a three years hiatus. In that time one record was released In 2014 singer Aaron Lazar rejoined the band and released the EP Usury. The current line-up consists of singer Aaron Lazar, guitarist Damien Paris, drummer Andrew Totolos, and bassist Hannah Moorhead. Their seventh full-length album, Flower of the Cosmos, was released in 2019 by Silver Sleeve and Rough Trade. The album was recorded at Studio G in Brooklyn and produced by Tony Maimone and Francisco Botero.

Andy Diagram is a British musician and trumpet player. He has worked with the instrument in a variety of bands and contexts ranging from pop and rock to experimental jazz, art rock and dance music. He is best known for his work with James, with Spaceheads and with the Pere Ubu singer David Thomas.

Paul Mullen is an English musician, multi-instrumentalist & singer songwriter who first gained recognition for being vocalist and guitarist of the band Yourcodenameis:milo, who went on hiatus in 2007. Since their hiatus, Mullen has gone on to both join and form a number of bands, which he currently splits his time between – including The Automatic, Young Legionnaire, Losers, HorseFight and Bleach Blood.

Meredith Godreau is an American singer-songwriter performing under the pseudonym Gregory and the Hawk. Active since 2001, Godreau initially enjoyed independent success with two EPs and a full-length album selling a total of 15,000 copies.

The Milk And Honey Band are an English rock band formed by singer, songwriter and multi-instrumentalist Robert White. 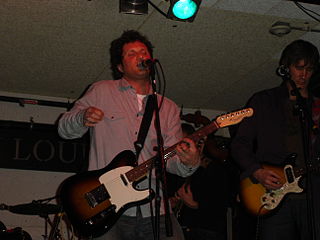 Peter Baldrachi is an American Boston-based singer-songwriter, drummer and guitarist. His style and sound has been compared to the likes of Paul Westerberg, Velvet Crush, Teenage Fanclub, and Big Star. His classic pop songwriting mixes in bits and pieces of Matthew Sweet, late-era Replacements, Goats Head Soup -era Rolling Stones, and on the more obscure side, The Beatifics and The Gladhands. He has released four well-received albums and several singles since 2006.

Boiled in Lead is a rock/world-music band based in Minneapolis, Minnesota, and founded in 1983. Tim Walters of MusicHound Folk called the group "the most important folk-rock band to appear since the 1970s." Influential record producer and musician Steve Albini called the band's self-titled first album "the most impressive debut record from a rock band I've heard all year." Their style, sometimes called "rock 'n' reel," is heavily influenced by Celtic music, folk, and punk rock, and has drawn them praise as one of the few American bands of the 1980s and 1990s to expand on Fairport Convention's rocked-up take on traditional folk. Folk Roots magazine noted that Boiled in Lead's "folk-punk" approach synthesized the idealistic and archival approach of 1960s folk music with the burgeoning American alternative-rock scene of the early 1980s typified by Hüsker Dü and R.E.M. The band also incorporates a plethora of international musical traditions, including Russian, Turkish, Bulgarian, Scottish, Vietnamese, Hungarian, African, klezmer, and gypsy music. Boiled in Lead has been hailed as a pioneering bridge between American rock and international music, and a precursor to Gogol Bordello and other gypsy-punk bands. While most heavily active in the 1980s and 1990s, the group is still performing today, including annual St. Patrick's Day concerts in Minneapolis. Over the course of its career, Boiled in Lead has released nearly a dozen albums and EPs, most recently 2012's The Well Below.

Adrian Harpham is an American session drummer, record producer, recording artist/songwriter and multi-instrumentalist based in New York City. He grew up in Southern California, Philadelphia and the Boston area.