Thomas Wight (died ca. 1608 [1] ) was a bookseller, publisher and draper in London. Wight published many important books, including many of the earliest law books in English.

Together with his father, the draper John Wight, he published seven editions of William Bourne's book A Regiment for the Sea, [2] [3] the first purely English navigational text.

By time Wight published Bourne's book, he was primarily a publisher, and became part of a monopoly for printing law books in 1599. He published many of the first printed English law books, including Fulbeck (1600), discussing study methods for law students, techniques for arguing a case, and suggestions for further reading. Pulton (1600), also published by Wight the same year, was the first book to attempt to summarise English criminal law. Fulbecke (1602) was one of the first books on international law. Saint German (1604) was first published in Latin in 1523, and attempts to describe English law through a dialogue between a churchman and a student of English common law. It ponders the nature of law, its religious and moral standards, and jurisdiction of Parliament. Manwood (1598) summarises the laws of the forest, known as Carta de Foresta; this was of key interest to English gentlemen, and went through numerous reprintings. Kitchin (1598) described manorial law, land law, and agrarian law.

Wight published copies of the "Yearbooks", notes by law students which were the earliest English legal reports dating back to the eleventh century. [4]

Wight was also a prominent figure in the early discussions of copyright law. [5]

Edmund Weaver, another famous London book publisher and bookseller, started as Wight's apprentice, and took over the business when Wight died.

Other books published by Wight

Sir John Fortescue of Ebrington in Gloucestershire, was Chief Justice of the King's Bench and was the author of De Laudibus Legum Angliae, first published posthumously circa 1543, an influential treatise on English law. In the course of Henry VI's reign, Fortescue was appointed one of the governors of Lincoln's Inn three times and served as a Member of Parliament from 1421 to 1437. He became one of the King's Serjeants during the Easter term of 1441, and subsequently served as Chief Justice of the King's Bench from 25 January 1442 to Easter term 1460.

Henry Chettle was an English dramatist and miscellaneous writer of the Elizabethan era, best known for his pamphleteering.

Thomas James was an English librarian and Anglican clergyman, the first librarian of the Bodleian Library, Oxford.

Richard Hathwaye, was an English dramatist.

John Manwood was a barrister of Lincoln's Inn, gamekeeper of Waltham Forest, and Justice in Eyre of the New Forest under Elizabeth I of England. He was a close relative, probably a nephew, of Sir Roger Manwood, Lord Chief Baron of the Exchequer in the reign of Elizabeth.

Sir Christopher Yelverton was an English judge and Speaker of the House of Commons.

William Fullbecke (1560–1603?) was an English playwright, historian, lawyer and legal scholar, who did pioneering work in international law. He described himself as "maister of Artes, and student of the lawes of England."

John Ryder (1562–1632) was a lexicographer who published an English-Latin Dictionary that was widely used in the 17th century. A favourite of Elizabeth I, he was Dean of St. Patrick's Cathedral, Dublin, and the Anglican Bishop of Killaloe.

Peter Short was a London printer of the later Elizabethan era. He printed several first editions and early texts of Shakespeare's works. 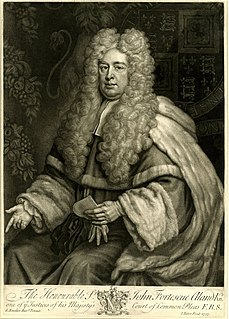 John Fortescue Aland, 1st Baron Fortescue of Credan, of Stapleford Abbots, Essex, was an English lawyer, judge and politician who sat in the House of Commons for two years from 1715 to 1717. He wrote on English legal and constitutional history, and was said to have influenced Thomas Jefferson. A member of both the Middle Temple and Inner Temple, he became a King's Counsel in 1714 and was then appointed Solicitor General, first to the Prince of Wales and then to his father George I in 1715. After a short stint as a Member of Parliament, Fortescue Aland was knighted and elevated to the Bench as a Baron of the Exchequer in 1717. He was subsequently a justice of the Court of King's Bench (1718–1727) and of the Court of Common Pleas (1728–1746), save for a brief hiatus between 1727 and 1728 which has been attributed to George II's displeasure with one of his legal opinions.

James Roberts, was an English printer who printed many important works of Elizabethan literature. F. G. Fleay says that "he seems to have been given to piracy and invasion of copyright".

Thomas Bell was an English Roman Catholic priest, and later an anti-Catholic writer.

On 1 June 1599, John Whitgift and Richard Bancroft signed their names on an order to ban a selection of literary works. This act of censorship has become known among scholars as the "Bishops' Ban" and is one of four such acts during the reign of Elizabeth I. Debora Shuger has called the order "the most sweeping and stringent instance of early modern censorship."