Thomas Zenke (born 30 January 1993) is a Nigerian international footballer who plays for Enyimba, as a winger.

Enyimba International Football Club or simply known as Enyimba, is a Nigerian football (soccer) club based in the city of Aba which plays in the Nigerian Professional Football League. Their name means People's Elephant in Igbo language and is also the nickname used for the city of Aba. Founded in 1976, the club rose to prominence in the 2000s and is considered the most successful Nigerian football club as they won two African Champions League titles, seven Nigerian championships and four Federation Cups since 2001.

He has played club football for ABS, Enyimba and Nasarawa United. [2] [3]

Abubakar Bukola Saraki FC is a Nigerian association football club from Ilorin, Nigeria. They were promoted to the Nigeria Premier League at the end of the 2009–10 season. They played their debut season's home games in Offa and Bauchi while the Kwara State Stadium was being renovated. They were put up for sale in July 2011 and bought by outgoing Kwara State governor Bukola Saraki for 250,000,000 naira, making them and JUTH F.C. the only Premier League teams that are not state-owned.

Nasarawa United Football Club is a soccer club based in Lafia, Nasarawa. They play in the Nigeria Premier League.

In January 2016, Zenke travelled to Malta for negotiations with Mosta FC. But he was left disappointed after learning what he will be earning which was far less than what he was told when he agreed to travel to Malta. He then travelled back to Nigeria and continued playing for Nasarawa United. [4] 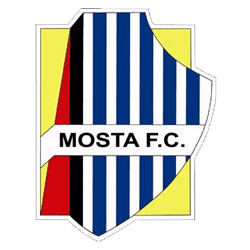 His older brother Simon is also a footballer. [3] The Nigerian Professional Football League (NPFL) is the highest level of the Nigerian football league system, for the Nigerian Club-football Championships. But the Nigerian top-division had experienced many dwindling fortunes, since the late 2000s. It is fed into by the Nigeria National League (NNL). It is organized by the League Management Company (LMC). 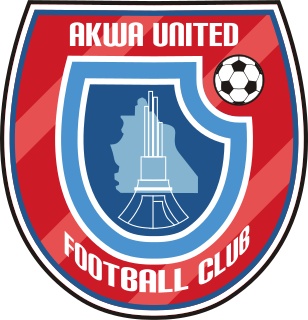 Akwa United Football Club is a Nigerian football club based in Uyo. They play in the first division of Nigerian football, the Nigeria Professional Football League. Godswill Akpabio International Stadium is the club's home stadium.

Simon Terwase Zenke is a Nigerian footballer who currently plays as a forward for Romanian first division club Dinamo București.

Sibi Gwar is a Nigerian football player who plays for Nasarawa United F.C. in the Nigeria Premier League.

The 2013 Nigeria Professional Football League will be the 42nd season of the competition since its inception, and the 23rd since the rebranding of the league as the "Professional League". Due to start in December, numerous delays and challenges to the board pushed the opening weekend back to February, and then pushed to March 9. There was a season-opening Super Four tournament won by Heartland F.C. between the four clubs involved in Continental competitions in order to get them ready for their international assignments.

Christantus Ejike Uzoenyi is a Nigerian international footballer who most recently played for Ajax Cape Town, as a winger.

Terungwa "Saviour" Fidelis is a Nigerian football player. He is currently playing for Taraba F.C. in the Nigeria Premier League.

Uche Henry Agbo, is a Nigerian footballer who plays for Spanish club Rayo Vallecano, on loan from Belgian club Standard Liège, as either a central defender or a defensive midfielder.

Mfon Udoh is a Nigerian footballer who plays as a forward for Akwa United and the Nigeria national team. He has been described as a complete forward who possesses pace, good positioning, natural finishing as well as the ability to provide assists. He is a "fox in the box" type of player, difficult to stop once in the penalty area. He currently holds the record for highest number of goals scored in the Nigerian Premier Football League in a single season. He is also the first player to score over 35 goals in two consecutive seasons in Nigeria. Between 2012 and 2014, he scored 39 goals in the regular league and 3 in national cup competitions, for a total of 41 goals in 2 seasons.. He was the highest goal scorer in the 2016 CAF champions league with 9goals and was all scored in the group stage of the competition.

The 2015 Nigeria Professional Football League is the 44th season of the Nigeria Premier League, the top Nigerian professional league for association football clubs, since its establishment in 1972, and the 25th since the rebranding of the league as the "Professional League".

Alieu Darbo is a Gambian professional footballer who last played as a midfielder for CA Bizertin in the Tunisian Ligue Professionnelle 1. Born in Sweden to Gambian parents, he represented Gambia at national youth teams. He appeared as an unused substitute for Gambia national football team once.

Salisu Yusuf is a Nigerian professional football manager and former player. He was the chief coach of the Nigeria national football team.

The 2017 Nigeria Professional Football League was the 46th season of the top Nigerian professional league for association football clubs, since its establishment in 1972, and the 27th since the rebranding of the league as the "Professional League". Plateau United won the league on the Saturday, 9 September 2017 with a 2-0 victory over Enugu Rangers.

Chima Akas Uche is a Nigerian international footballer who plays as a defender for Kalmar FF in Allsvenskan. He has also represented the Nigeria national team.

The 2018–19 Maltese Premier League is the 104th season of top-flight league football in Malta. The season began on 17 August 2018 and will end in April 2019. Valletta are the defending champions, having won their 24th title the previous season.

The 2018 Nigeria Federation Cup is the 77th edition of the football tournament. This edition of the competition began on 9 September 2018 and ended on 24 October 2018.