Thompson-Kidwell Cemetery is a cemetery located on the grounds of Fox Mill Park in Reston, Virginia. The cemetery dates from the late 19th century and was a burying plot for members of the Thompson and Kidwell families who lived in this area of Fairfax County, Virginia. The cemetery was largely forgotten until the mid-1970s when adjacent neighborhood Fox Mill Woods was built. Even at that point it was located in dense woods only accessible by taking a little-known path from the nearby park. When A. Scott Crossfield Elementary School was built nearby in 1988, the cemetery was cleaned up by the Fairfax County Park Authority, who installed a surrounding fence and a pathway leading from the parking lot of the Park.

24 known graves are known to exist, but due to years of neglect, severe weathering and vandalism no headstones are currently readable. Many of the headstones are broken in pieces and scattered around the grounds. [1] [2]

The cemetery is currently under supervision of the Fairfax County Park Authority. 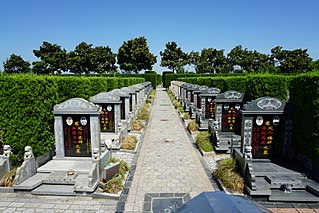 Annandale is a census-designated place (CDP) in Fairfax County, Virginia. The population of the CDP was 41,008 as of the 2010 United States Census. It is home to the oldest and largest branch of the Northern Virginia Community College system, and to one of the D.C. area's Koreatowns. 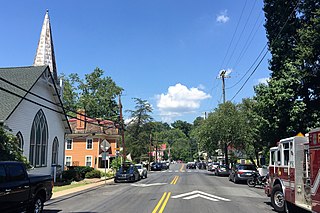 Clifton is an incorporated town located in southwestern Fairfax County, Virginia, United States, with a population of 282 at the time of the 2010 census, up from 185 at the 2000 census.

Rose Hill is a census-designated place (CDP) in Fairfax County, Virginia, United States. The population was 20,226 at the 2010 census. Built in the mid-1950s, Rose Hill is the largest of the subdivisions that make up the CDP, which is just southwest of Alexandria; others include Wilton Woods, Burgundy Village, and Winslow Heights. Street addresses are in Alexandria ZIP codes 22310, 22303 and 22315.

Poplar Grove National Cemetery is near Petersburg, Virginia, and is managed as part of Petersburg National Battlefield. 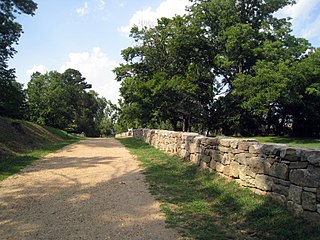 Four Mile Run is a 9.4-mile-long (15.1 km) stream in Northern Virginia that starts near Interstate 66, at Gordon Avenue in Fairfax County and proceeds southeast through Falls Church to Arlington County in the U.S. state of Virginia. Most of the stretch is parkland and is paralleled by two paved non-motorized transport and recreational trails, the Washington & Old Dominion Railroad Trail and the Four Mile Run Trail.

The earliest electric railway, or streetcar line, in Northern Virginia opened in 1892. At their peak, when merged into a single interurban system, the successors of this and several other lines ran between downtown Washington, D.C., Rosslyn and Arlington Junction – in present-day Crystal City – and out to Mount Vernon, Fairfax City and Nauck. 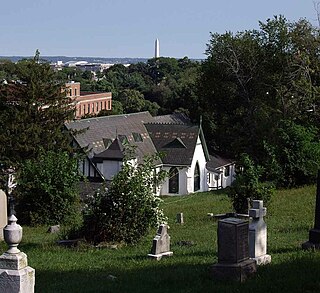 Holy Rood Cemetery is located at 2126 Wisconsin Avenue N.W. at the southern end of Glover Park, adjacent to Georgetown in Washington, D.C. It is at one of the highest elevations in the city and has memorable views. Holy Rood, which comes from the Scottish, haly ruid, meaning holy cross, contains approximately 7,000 burials, including as many as 1,000 free and enslaved African Americans. It may be the best-documented slave burial ground in the District of Columbia.

Difficult Run is a 15.9-mile-long (25.6 km) tributary stream of the Potomac River in Northern Virginia in the United States. The area has had many historical uses dating back to the early 1800s. Today, the area is used recreationally by visitors interested in the watershed's variety of options including hiking, biking, fishing, boating, climbing, and bird watching. The wildlife at Difficult Run is vast as 163 different species can be seen depending on the season. There are 41 different soil types found on the trail and alongside the stream. The stream is part of the greater 57.7- square-mile Drainage basin, or watershed, located in the north-central portion of Fairfax County and drains directly to the Potomac River.

Clear Creek Township is one of eleven townships in Monroe County, Indiana, United States. As of the 2010 census, its population was 5,000 and it contained 2,674 housing units.

The Fairfax County Economic Development Authority (FCEDA) is an independent authority in Fairfax County, Virginia, created under Virginia state law in 1964 and funded by Fairfax County government. The FCEDA exists to promote investment and business growth in Fairfax County in order to expand the commercial tax base that helps pay for public services such as the county school system, police and fire departments, parks, libraries and social services. The FCEDA does this by managing marketing programs that encourage businesses to expand or relocate to the county. It is the largest non-state economic development authority in the nation. Since its founding in 1964, the Fairfax County Economic Development Authority has worked with more than 3,500 companies that added more than 230,000 jobs and leased more 71 million square feet of office space in Fairfax County.

The Occoquan River is a tributary of the Potomac River in Northern Virginia, where it serves as part of the boundary between Fairfax and Prince William counties. The river is a scenic area, and several local high schools and colleges use the river for the sport of rowing. 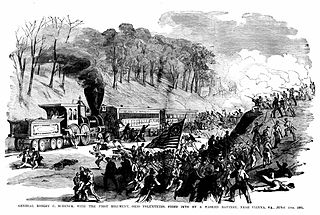 The Battle of Vienna, Virginia was a minor engagement between Union and Confederate forces on June 17, 1861, during the early days of the American Civil War.

Belvale is an historic house in present-day Fairfax County, Virginia built between 1763 and 1766 by George Johnston (1700-1766), member of the Virginia Assembly 1758-1766, friend of Patrick Henry, and legal advisor to George Washington, who was a frequent visitor to the home. The home's original lands, described as lying on "Doeg's Run", were first granted on July 6, 1698 to Richard Carpenter, who bequeathed them in 1750 to his wife Mary and daughter Ann, who sold the property to Johnston in 1763. Belvale is sometimes called "Belle Vale Manor" in historical records. Belvale was Johnston's country seat; his town home was in the city of Alexandria.

Mason’s Hill is a geographic eminence located in Fairfax County, Virginia. Its summit rises to 397 feet (121 m) above sea level.

Fairfax Memorial Park is a family owned and operated cemetery located in Fairfax, Virginia, United States. The cemetery was founded in 1957 by Cornelius H. Doherty, Sr.

Leesylvania was a plantation and historic home in Prince William County, Virginia, now part of Leesylvania State Park. During the 18th century, it was the home of Henry Lee II, his family and numerous enslaved people, and known for its productive land and especially the quality of its tobacco. Lee's sons Henry "Light-Horse Harry" Lee, Richard Bland Lee and Charles Lee, held prominent positions in Virginia during the American Revolutionary War and early federal government.