Last updated January 18, 2020
This article is about an international media training charity. For the charitable arm of Thomson Reuters, see Thomson Reuters Foundation.

The Thomson Foundation is a media development not-for-profit organisation based in London, United Kingdom but operating worldwide. It was founded in 1962 and was the first charitable foundation with the specific aim of training journalists in developing countries. [1] It celebrated its 50th anniversary in 2012.

The goal of the foundation is to promote transparency and media freedom across the world and train journalists in the skills that will help them to perform their role of holding governments and commercial entities to account in the public interest.

It provides practical training for journalists and communications professionals across the globe working with every type of media. Its online academy Journalism Now is a series of interactive courses designed and led by industry experts providing e-learning in digital and multimedia skills.

The foundation was established in 1962 by the Canadian media businessman Roy Thomson. It was set up to champion free, fair and open media in the developing world. Previous guises include the Thomson Media Foundation. [2]

An extract from the Trust Deed on the formation of the foundation reads as follows: "Its purpose is the advancement of knowledge and spiritual enlightenment of all peoples enabling them to achieve closer understanding and to play an informed and responsible role in the affairs of their nation and the world. To this end the Foundation’s activities are primarily concerned with the development of modern techniques of mass communications in emergent countries." [3]

For many years, the organisation was based in Cardiff, Wales, and worked closely with Cardiff University's journalism school. In late 2012 it moved to central London [4] and is now based on Chancery Lane. [5]

Established in 2017, Thomson Media gGmbH is the Berlin-based partner organisation of the Thomson Foundation group. [6]

In the past, the foundation has worked in more than 150 countries [7] . Its current projects include the OPEN Media Hub [8] , a four-year programme which seeks to strengthen independent media and professional journalism in 17 of the countries bordering the European Union and create a media sharing platform. [9] Programmes include the Inquirer Awards, [10] which promotes investigative journalism in a number of countries across Asia and the Middle East.

The foundation's previous projects have included a long-running programme of work in Sudan, which included training for journalists working in a range of media [11] and Africa Means Business, a project in collaboration with University of Ghana and the African Research Consortium based in Kenya, [12] with funding from the Bill and Melinda Gates Foundation.

The Thomson Foundation runs an annual digital and multimedia summer course, which sees journalists from across the globe come to the UK for a five weeks of training and work placements. [13]

The foundation has also done a lot of work in China over the past three decades, including encouraging modern journalistic practices in the state news agency Xinhua. [14]

The foundation runs a number of competitions mainly aimed at young journalists to enable them to showcase their work and/or to provide opportunities to take part in study tours and receive mentoring from senior international journalists. The Young Journalist Award has been running annual since 2013 in partnership with the UK Foreign Press Association. [15] . The Mobile Journalism competition was launched in conjunction with Mojocon a conference sponsored by Irish Broadcaster RTE in 2015. It is now associated with MojoFest [16] .

The Commonwealth Digital Challenge is a competition aimed at providing young and aspiring media managers from the Commonwealth with the skills and tools necessary to help their organisations face the digital challenges in their countries. It is funded by the Elizabeth R Media Fund [17] and managed by the Thomson Foundation. It was originally established as The Elizabeth R Broadcasting Fund in 1995 to assist the development of broadcasting skills in the Commonwealth with a donation from Buckingham Palace. The donation came from royalties from “Elizabeth R”, the 1992 BBC documentary which marked the 40th anniversary of the reign of Queen Elizabeth II.

Journalism Now [18] is the foundation's on line training programme. It is designed to develop journalists' abilities to work across multiple platforms and media.

The Foundation's first Director of Studies was Don Rowlands, former editor of the Western Mail in Cardiff. In 1964, he was joined by Tony Crook, then on the Daily Mail, as his deputy. The pair visited numerous countries, training their journalists in their own offices, which was seen as the best way forward after overseas journalists had been to Cardiff for their three-month courses.

Don was exceptionally well-known and respected throughout India and the Middle East, while Tony also worked in India, Lebanon, Afghanistan and Iran. Tony Crook was asked to join The Times when Lord Thomson took it over in 1967. Don died shortly after retiring in 1989.

Other staff and associates include: director of development David Quin, director of innovation and learning Hosam El Nagar, head of training and communications Deborah Kelly, Bettina Peters, formerly of the European Journalism Centre, Helen Scott, a member of the board of directors for the Sheffield Documentary Film Festival and Mark Webster, [20] previously a correspondent and editor at ITN.

Lord Chandos is the chair of the Thomson Foundation, [21] having succeeded Lord Fowler, a former cabinet member in the Thatcher government.

PA Media is a multimedia news agency operating in the United Kingdom and Ireland.

The National Council for the Training of Journalists (NCTJ) was founded in 1951 as organisation to oversee the training of journalists for the newspaper industry in the United Kingdom and is now playing a role in the wider media. It is a self-appointed body and does not hold any statutory powers from central government, meaning students and those seeking to enter the media industry do not have to legally hold one of its qualifications to obtain work as a journalist.

The Commonwealth Press Union (CPU), formerly the Empire Press Union, was an association composed of 750 members in 49 countries, including newspaper groups, individual newspapers, and news agencies throughout the Commonwealth of Nations. They were represented within the CPU by their proprietors, publishers or senior executives.

The Pakistan Press Foundation (PPF) was established in 1967 as a non-profit organisation by the news agency Pakistan Press International and operated until 1974, when it had to suspend operations due to the political environment then prevailing in the country. It was reactivated in 1992 and has since been involved in assisting in the development of independent media in Pakistan by conducting training programmes for journalists, carrying out projects in research and documentation, and campaigning to defend and promote freedom of the press.

The Global Press Institute, formerly the Press Institute for Women in the Developing World, is a San Francisco-based 501(c)(3) nonprofit with international operations in 27 countries. GPI was founded on the premise that, with appropriate training, local women in developing countries can become quality journalists. It identifies the social, historical and political context that these women possess as a factor distinguishing them from traditional foreign correspondents.

Journalism.co.uk is a website with news and advertorial content for journalists based in Brighton, United Kingdom. It was founded in 1999 by John Thompson with the aim of covering the online publishing industry and how the Internet is fundamentally changing the practice of journalism. It also hosts an annual conference for journalists. The site claims to have a user base of 150,000 monthly visitors. Its content is free and advertising-funded, and it is published by Mousetrap Media. The site includes news for journalists, career advice and training listings, events listings, a service matching journalists with press requests and a press release distribution service.

Balkan Insight is a website of the Balkan Investigative Reporting Network (BIRN), that focuses on news, analysis, commentary and investigative reporting from southeast Europe. It is run by journalists in southeast Europe—the Balkans—including BIRN regional director Gordana Igric, who reported on war crimes in the former Yugoslavia.

The Reuters Institute for the Study of Journalism (RISJ) is a UK-based research centre and think tank.

Churnalism is a pejorative term for a form of journalism in which press releases, stories provided by news agencies, and other forms of pre-packaged material, instead of reported news, are used to create articles in newspapers and other news media. Its purpose is to reduce cost by reducing original news-gathering and checking sources, to counter revenue lost with the rise of Internet news and decline in advertising; there was a particularly steep fall from late 2015. The origin of the word has been credited to BBC journalist Waseem Zakir.

Demotix was a photo agency. It enabled freelance photojournalists to license their photos to mainstream media organisations, charities, and stock image buyers.

Komla Afeke Dumor was a Ghanaian journalist who worked for BBC World News and was the main presenter of its programme Focus on Africa.

Internews Europe is an international development organisation founded in 1995 that specialises in media development which includes supporting independent media and free information flows in fragile states, emerging democracies and some of the world’s poorest countries. In doing so, it tries to promote good governance, human rights, effective response to humanitarian crises and access to information on critical issues such as the environment and climate change.

The Student Publication Association (SPA) is a national body for student newspapers and magazines in the United Kingdom and the Republic of Ireland. The SPA aims to provide support and training for student journalists, encourage best practice, and recognise success. 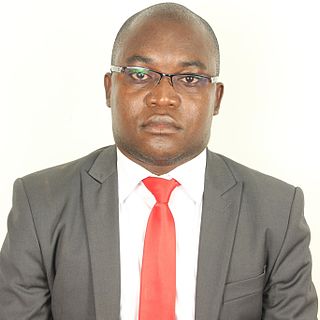 Paul Monde Shalala, is an international renown and award-winning Zambian journalist, blogger, and political analyst specializing on Zambian, African and world current affairs. He is a reporter for the Zambia National Broadcasting Corporation.

James Ball is a British journalist and author. He has worked for The Guardian, WikiLeaks, BuzzFeed, The New European and The Washington Post and is the author of three books. He is the recipient of several awards for journalism and was a member of The Guardian team which won the Pulitzer Prize for investigative journalism.

Juliet Bawuah is a Ghanaian sports journalist who has written for top media houses.. She has interviewed FIFA President, Gianni Infantino as well as the former World Player of the Year and current Liberia President George Weah. She became well known as a result of her interview with Gianni Infantino, on the sidelines of a FIFA Summit in the North-Western African country, Mauritania. She also founded the Africa Women's Sports Summit, a programme that brings together Africa's leading female sports names and aspiring ones.