Thomson Mason may refer to: 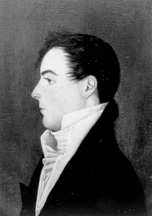 James Murray Mason was a US Representative and US Senator from Virginia. He was a grandson of George Mason and represented the Confederate States of America as appointed commissioner of the Confederacy to the United Kingdom and France between 1861 and 1865, during the American Civil War. 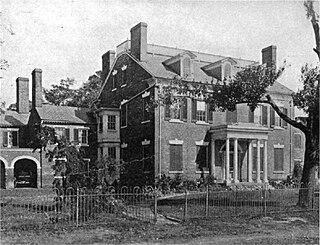 Colross,, is a Georgian mansion in Princeton, New Jersey; it was built as the center of an estate in the Old Town neighborhood of Alexandria, Virginia. Colross is currently the administration building of Princeton Day School. The Colross property originally occupied the entire 1100 block of Oronoco Street; Alexandria merchant John Potts developed it as a plantation and began building the mansion in 1799–1800. In 1803, Jonathan Swift—also an Alexandria merchant and a city councilman—purchased the property and during his ownership continued constructing the mansion. After Swift's death in 1824, Colross was purchased by Thomson Francis Mason (1785–1838), son of Thomson Mason (1759–1820) and grandson of Founding Father George Mason (1725–1792) of Gunston Hall. Mason served as a judge of the Criminal Court of the District of Columbia and as mayor of Alexandria. During his ownership, Mason made Colross his chief homestead; he substantially modified and added to the mansion. After successive ownerships, the area around Colross became heavily industrialized. The mansion was bought by John Munn in 1929; between that year and 1932 it was transported brick-by-brick to Princeton, where in 1958 it was sold to Princeton Day School, which uses it as a school administration building housing its admission and advancement offices.

Arthur "Pen" Pendleton Mason was a lieutenant colonel in the Confederate States Army serving during the American Civil War. Mason was a scion of the prominent Mason political family of Virginia.