Thong is a type of narrow garment that primarily covers the pubic area. 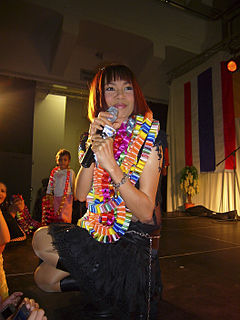 Jintara Poonlarp is a Thai mor lam, luk thung and pop music singer. She is one of the most popular and prolific of the artists in the mor lam and luk thung genres, having released 40 original albums as well as many compilations. She records roughly equal amounts of mor lam and luk thung, but two of her best-known songs are the string hits "Ma Tammai" and "Faen Ja," recorded with Thongchai McIntyre. She is also sometimes known by her nickname Jin or the epithet sao siang pin.

Thongchai "Bird" McIntyre is a Thai of Scottish descent pop singer who released his debut album in 1986. He is also sometimes known as Bird Thongchai, Phi Bird or simply Bird. He finished high diploma management major from Thonburi Commercial. 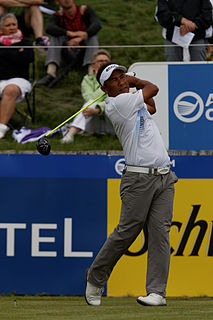 Pipob Thongchai is a non-governmental organization leader who advocates for a wide range of issues. He has been active since he was a college student, when he was secretary of the University Student Federation of Thailand. He is also a former member of the Council of Socio-economic Consultants of Thailand, the Committee for Democratic Advocacy of Thailand, and the Children's Foundation of Thailand.

Katreeya "Kat" English is a Thai of English descent singer, actress, model who has released 5 studio albums, the most recent of which is Sassy K on GMM Grammy. In 2015, she recorded "They Call Us The Royals", a new song for Reading F.C. of the Football League Championship.

Thongchai Winichakul, is a Thai historian and researcher of Southeast Asian studies. He is professor emeritus of Southeast Asian history at the University of Wisconsin–Madison and a chief senior researcher at the Japanese Institute of Developing Economies. He was the president for the Association for Asian Studies in 2013. He has had a major impact on the concept of Thai nationalism.

Golf arrived in Thailand during the reign of King Rama V. It was first played by nobles and other elitists of high society but is now played by a wider segment of the population.

Suradech Thongchai is a professional footballer from Thailand. 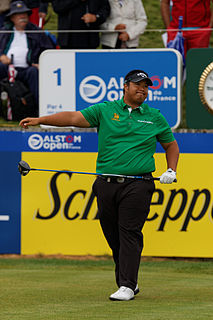 True Thailand Classic is a golf tournament, co-sanctioned by the Asian Tour and the European Tour, played annually in Thailand. The inaugural tournament was played from 12–15 February 2015 at the Black Mountain Golf Club, in Hua Hin. It has a purse of US$2,000,000, twice as high as the other leading tournaments in the country, the Thailand Golf Championship and Thailand Open.

Thongchai Rathchai, nicknamed Thong (ธง), is a retired professional footballer who plays as a Forward from Roi Et Province, Thailand.

Thongchai Sitsongpeenong is a Thai Muay Thai kickboxer. As of June 2016, he is ranked #9 at Rajadamnern Stadium at 160 lbs and #10 by World Boxing Council Muaythai at 160 lbs. 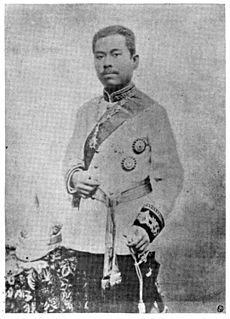 Prince Srisiddhi Thongjaya, the Prince Siridhaj Sangkas was a Prince of Siam (later Thailand He was a member of Siamese royal family is a son of King Mongkut and Chao Chom Manda Bua. 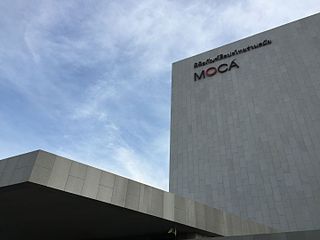 The Museum of Contemporary Art is an art museum in Bangkok, Thailand. It is privately owned by business executive Boonchai Bencharongkul, and was opened in 2012. The museum, one of the largest contemporary art museums in Asia, features an extensive collection of works by many famous Thai artists, including Thawan Duchanee, Hem Vejakorn, Chalermchai Kositpipat and Prateep Kochabua.

Thongchai or Tongchai are romanizations of two homophonous Thai names, ธงชัย and ธงไชย. Both are masculine given names, and also a surname.