Thorkild Thyrring (born 24 October 1946) is a Danish auto racing driver. He drove several times in the Le Mans 24 hour race, most recently in 2005 and 2006 for Sebah Automotive Ltd in a Porsche 911 GT3. His best result in the race was finishing nineteenth overall in 2005. Previously he raced a Lotus in 1993 and 1994 and a Corvette in 1995. His team had failed to finish the race in all of these previous attempts. 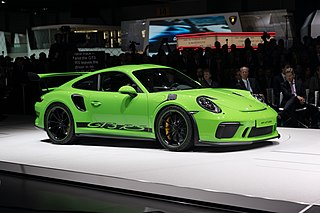 The Porsche 911 GT3 is a high performance version of the Porsche 911 sports car primarily intended for racing. It is a line of high-performance models, which began with the 1973 911 Carrera RS. The GT3, introduced in 1999, is named after the Fédération Internationale de l'Automobile (FIA) Group GT3 class, in which it was designed to compete.

Toyota Motor Corporation is a Japanese multinational automotive manufacturer headquartered in Toyota, Aichi, Japan. In 2017, Toyota's corporate structure consisted of 364,445 employees worldwide and, as of September 2018, was the sixth-largest company in the world by revenue. As of 2017, Toyota is the largest automotive manufacturer. Toyota was the world's first automobile manufacturer to produce more than 10 million vehicles per year which it has done since 2012, when it also reported the production of its 200-millionth vehicle. As of July 2014, Toyota was the largest listed company in Japan by market capitalization and by revenue.

The Nissan Primera is a large family car which was produced by the Japanese automaker Nissan from 1990 to 2007, for the Japanese and European markets. In Japan, it replaced the Auster/Stanza, and was exclusive to Nissan Prince Store locations. In North America, it was the entry level luxury sports sedan for the Infiniti brand. The word "primera" is Spanish for "first class" or "finest".

He is still the most winning danish racedriver till this date, all wins from Denmark and the rest of the world added together. 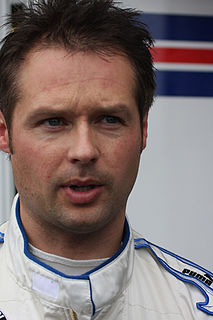 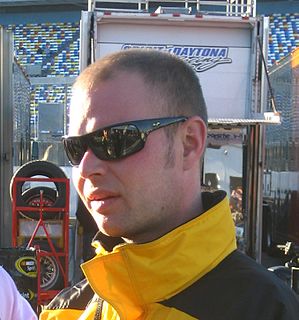 Tom Kristensen is a Danish former racing driver. He holds the record for the most wins at the 24 Hours of Le Mans with nine, six of which were consecutive. In 1997, he won the race with the Joest Racing team, driving a Tom Walkinshaw Racing-designed and Porsche-powered WSC95, after being a late inclusion in the team following Davy Jones' accident that eventually ruled him out of the race. All of his wins since then have come driving an Audi prototype, except in 2003, when he drove a Bentley prototype. In both 1999 and 2007 Kristensen's team crashed out of comfortable leads in the closing hours of the race. He is considered by many to be the greatest driver ever to have raced in the 24 Hours of Le Mans, earning the nickname "Mr Le Mans". Elsewhere Kristensen also holds the record for most wins at the 12 Hours of Sebring with a total of six.

Wayne Michael Gardner is an Australian former professional Grand Prix motorcycle and touring car racer. His most notable achievement was winning the 1987 500 cc Motorcycle World Championship, becoming the first Australian to win motorcycling's premier class. His success on the world motorcycle road racing circuit earned him the nickname The Wollongong Whiz. Both Wayne's sons, Remy and Luca, are racing motorcycles like their father.

Tim Harvey is a British racing driver, best known for being the 1992 British Touring Car Champion, and the 2008 and 2010 Porsche Carrera Cup Great Britain champion. A household name in the 1990s, Harvey won sixteen races in the British Touring Car Championship between 1987 and 1995, but competed in the series until 2002. He was also the winner of the invitational Guia Race of Macau touring car event, in 1989.

Michael "Mike" Jordan (born 17 February 1958 is a British racing driver who competed in various classes of saloon and sportscar racing. He has won three British titles and spent three years competing in the BTCC against many drivers less than half his age, including his son and teammate Andrew. In 2006 he became the oldest driver ever to win a BTCC race. He lives in Lichfield with his wife Judith and their three children.

Kieth O'dor was a British racing driver, born in Salisbury, who competed primarily in touring cars. He scored Nissan's first win during the super touring era in both the British Touring Car Championship and the Super Tourenwagen Cup. He was killed during a race at the AVUS circuit in Berlin.

Chris Hodgetts is a British former racing driver. He began his racing career in 1979, driving in the Clubman Class A championship.

Carl Breeze is a British auto racing driver. He is not to be confused with Hyla Breese, an Australian driver also with British Touring Car Championship experience. His racing heroes include Ayrton Senna, Nelson Piquet and Valentino Rossi. Breeze currently competes in the Ginetta GT Supercup. 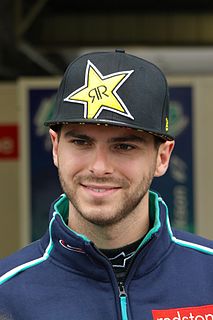 Motorbase Performance is a British motor racing team, founded in 2004 by former Production Saloon racer David Bartrum. They are best known for competing in the British Touring Car Championship.

Thomas "Tommy" Erdos is a Brazilian auto racing driver. He has raced for most of his career in Great Britain and Europe, where he currently resides in Buckinghamshire England with his partner Sheila. He has three children. 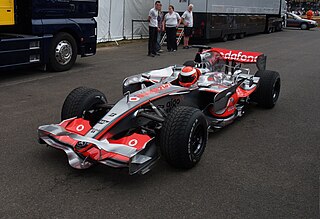 Chris Goodwin is a British auto racing driver. Currently he works as Expert High Performance Test Driver for Aston Martin. Additionally he manages the racing career of Bruno Senna and continues to race in International GT Endurance events. He was also TV commentator on F1 for ESPN Star Sports for nearly ten years and occasionally still appears on EPS&M and other networks such as ITV. 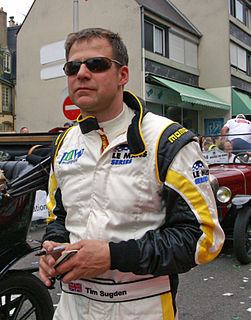 Tim Sugden is a British racing driver. He is both driver and manager for his own racing team, Tim Sugden Motorsport.

Andrew Kirkaldy is a British racing driver and Managing Director of McLaren GT.

Paul Stokell is an Australian racing driver. Despite never making a significant impact in touring car racing, Stokell has been a race and championship winning driver in open wheel and sportscar racing consistently since the early 1990s and remains so today have won the Australian Mini Challenge in 2009.

Elton Julian is an American professional racing driver and racing team owner born in the Canary Islands of Spain. He grew up in Ecuador and the United States. He speaks English, French and Spanish fluently.