Thornton (formerly known as Simmonsville and Lower Simmons Village) is a neighborhood located in the north-west part of Cranston, Rhode Island on the Johnston line and extends into the Johnston side.

Many of the residents of this Thornton are Italian-American, and the Feast of Saint Rocco, a Christian saint, is held every August on the grounds of St. Rocco's Church and remains an important cultural event in the community. Saint Rocco's Church was formerly on the Cranston side of Thornton on Clemence Street until the new church opened in 1951 on Atwood Avenue on the Johnston side of Thornton. [1]

Cranston, once known as Pawtuxet, is a city in Providence County, Rhode Island, United States. The official population of the city is 80,559, making it the third largest in the state. The center of population of Rhode Island is located in Cranston. Cranston is a part of the Providence metropolitan area.

Kingston is a village and a census-designated place in the town of South Kingstown, Rhode Island, United States, and the site of the main campus of the University of Rhode Island. Much of the village center is listed on the National Register of Historic Places as Kingston Village Historic District. It was originally known as Little Rest. Cranston School District is a school district located in Cranston, Rhode Island, USA, which services an approximate student population of 11,155 in pre-kindergarten through twelfth grade. With 790 full-time classroom teachers, the district's overall student/teacher ratio is 14.1:1. There are 24 schools associated with the agency, which is classified as being in or near a mid-sized city. Cranston School District allocates approximately $5,572 per pupil for instructional expenses.

Knightsville is an urban neighborhood in the city of Cranston, Rhode Island.

Fiskeville is a small village in the south west corner of Cranston, Rhode Island, United States, the south east corner of the Town of Scituate, Rhode Island and across the northern side of Coventry, Rhode Island. The village's Main Street forms the border between Cranston and Scituate. Fiskeville grew up as one of several mill towns along the Pawtuxet River in the mid-1800s. The Fiskeville textile mill was formed by Dr. Caleb Fiske, a Revolutionary War doctor turned businessman in 1812. The village became home to those who worked in the mill, mostly immigrants from Portugal, France, Italy and England. Fiskeville is usually associated with Cranston rather than with Scituate as most of the original buildings including Dr. Fiske's residence were in Cranston. Although the mill and about a dozen nearby mill houses were in Scituate. Poets Karen Haskell and Darcie Dennigan both grew up, a few doors down from each other, in the 1970s and 1980s on Main Street in Fiskeville.

Auburn is an urban neighborhood in the east-central part of Cranston, Rhode Island.

Saint Paul School is a Catholic, co-educational, elementary school in Cranston, Rhode Island, United States. It serves students from the cities of Cranston, Warwick and Providence in Rhode Island, USA.

Saint Paul Church, located in Cranston, Rhode Island, is a parish of the Roman Catholic Diocese of Providence, Rhode Island.

Norwood is a neighborhood in the city of Warwick, Rhode Island. Norwood is bounded by Route 37, the Pawtuxet River, Sherwood Avenue, the former Christopher Rhodes Elementary School, North Palm Boulevard, Palm Boulevard, and Post Road. Such borders mark the area traditionally served by the fire station previously located at the current site of the Norwood Boys & Girls Club. 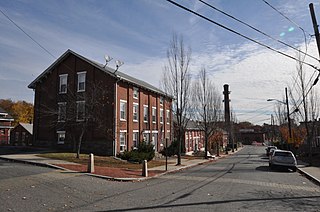 Lonsdale is a village and historic district in Lincoln and Cumberland, Providence County, Rhode Island, United States, near Rhode Island Route 146 and Route 95. The village was originally part of the town of Smithfield until Lincoln was created in the 1870s, and was originally centered on the Lincoln side of the river. William Blaxton settled in the area in 1635. In the nineteenth and early twentieth centuries, Lonsdale was home to several manufacturers including the Lonsdale Company's Bleachery, and the Ann & Hope mill was also located in the village in Cumberland.

The Edward Searle House is an historic stone ender in Cranston, Rhode Island in the village of Oaklawn. The house is one of the oldest surviving buildings in the state. 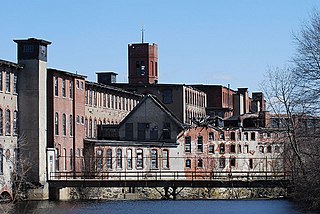 Interstate 895 was a proposed Interstate Highway in Rhode Island and Massachusetts that would have supplemented Interstate 295 to create a full beltway around Providence.

Frog City, Rhode Island is a village in Johnston, Rhode Island within another village of Thornton, Rhode Island and according to one source was "probably termed Frog City because of the numerous frogs along the Pocasset River and ponds near Victoria Mill at Mill Street and Victoria Mount."