Thornton railway station may refer to:

Thornton railway station is located on the Main Northern line in New South Wales, Australia. It serves Thornton in the eastern suburbs of Maitland opening in 1913. 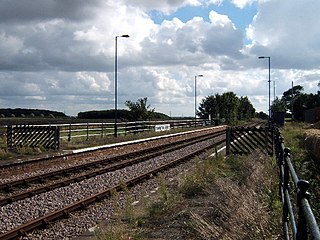 Clapham railway station serves the village of Clapham in North Yorkshire, England. The station is 48 miles (77 km) north-west of Leeds on the Leeds to Morecambe Line towards Lancaster and Morecambe. It is managed by Northern who provide all passenger train services. 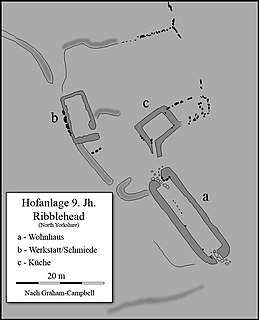 The River Twiss is a river in the county of Yorkshire, England. The source of the river is Kingsdale Beck which rises at Kingsdale Head at the confluence of Back Gill and Long Gill in the Yorkshire Dales. Beneath Keld Head, it changes its name to the River Twiss. It has two notable waterfalls, Thornton Force and Pecca Falls, and its course follows part of the Ingleton Waterfalls Walk, then through Swilla Glen to Thornton in Lonsdale and down to Ingleton, where it meets the River Doe to form the River Greta.

The River Doe is a river in North Yorkshire, England. The river's source is near God's Bridge close to the settlement of Chapel-le-Dale and flows through Twisleton in a south-westerly direction to Ingleton, where it meets the River Twiss to form the River Greta. The river forms part of the River Lune system that flows into the Irish Sea.

Tebay railway station was situated on the Lancaster and Carlisle Railway between Lancaster and Penrith. It served the village of Tebay, Cumbria, England. The station opened in 1852, and closed on 1 July 1968. It was the western terminus of the South Durham & Lancashire Union Railway from opening in 1861 until closure in January 1962. It was also the northern terminus of the Ingleton Branch Line from 1861 to 1954. 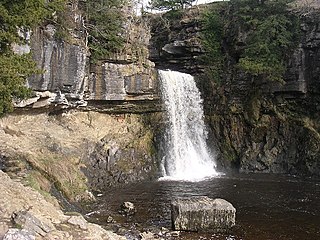 Ingleton Waterfalls Trail is a well-known circular trail beginning and ending in the village of Ingleton in the English county of North Yorkshire, now maintained by the Ingleton Scenery Company. It is claimed that the trail, some 8 kilometres (5 mi) long, and with a vertical rise of 169 m (554 feet) has some of the most spectacular waterfall and woodland scenery in the north of England. It is on private land and an entrance fee is charged.

The Forge Valley Line was a 16 mile long branch of the North Eastern Railway between Seamer and Pickering. The line was intended to link Scarborough with Pickering. It opened in 1882 and closed in 1950, with the exception of a stretch from Pickering to Thornton Dale which remained open for quarry traffic until 1963.

Masongill is a small community on the edge of the Craven district of North Yorkshire, England. The village, in the Yorkshire Dales, lies near the border of Lancashire to the west, and the nearby hamlet of Ireby. 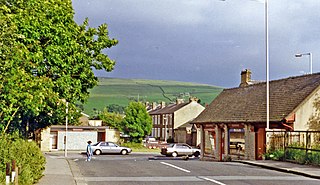 Earby railway station was a railway interchange station serving the small town of Earby, which was in the West Riding of Yorkshire, England, at the time but now is in Lancashire. It was built by the Midland Railway, on the former Leeds and Bradford Extension Railway between Skipton and Colne and opened in 1848. 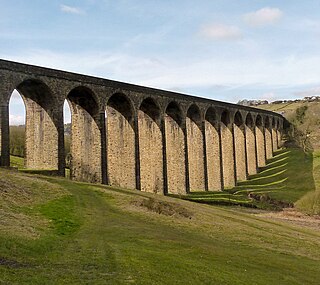 Thornton Viaduct is a disused railway viaduct crossing Pinch Beck valley at Thornton, near the city of Bradford in West Yorkshire, England. It is 300 yards (270 m) long and has 20 arches. It was built in an S-shape to allow a smooth access to Thornton station. The viaduct was part of the GNR's Queensbury Lines running between Queensbury and Keighley. It stopped carrying passengers in 1955 but remained open to goods until the 1960s. At that time, the railway closed and the tracks were pulled up. The viaduct is now a Grade II listed building.

The Ingleton branch line was a rural railway line in the West Riding of Yorkshire, Lancashire and Westmorland in England. It was originally planned in 1846 to form part of a main line route from London to Scotland, but fell victim to rivalry between railway companies. Completion was delayed until 1861, and it was only ever a rural branch line, serving the towns of Ingleton, Kirkby Lonsdale and Sedbergh. It closed to passengers in 1954 and was dismantled in 1967.

Ingleton (Midland) railway station was one of two stations serving the village of Ingleton, North Yorkshire, England. It was originally open for just ten months between 1849 and 1850, and did not reopen until 1861. It then served as the frontier between the Midland Railway to the south and the London and North Western Railway to the North, with trains from each railway terminating at the station. Through trains did not begin until the two companies were merged in 1923. The station closed in 1954. The village's Community Centre is now on the site of the former station.

Ingleton (L&NW) railway station was one of two stations serving the village of Ingleton, North Yorkshire, England. It owed its existence to the intense rivalry between the two stations' owners. It opened, along with the Ingleton Branch Line, in 1861, and closed in 1917, by which time the two railway companies had become more cooperative.

Sedbergh railway station was located in the West Riding of Yorkshire, serving the town and locale of Sedbergh on the Ingleton Branch Line. The town now lies in Cumbria following boundary changes in 1974. 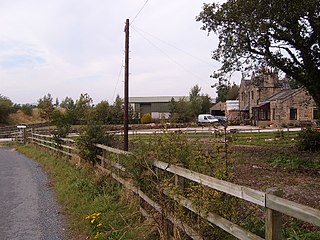 Kirkby Lonsdale railway station was located in Lancashire, England, on the Ingleton Branch Line, 2 miles (3 km) from the town of Kirkby Lonsdale in Westmorland.