Thorny Lea Golf Club is a private country club in Brockton, Massachusetts founded in 1900. The current club structure was built in 1900. It has a clubhouse with many features. This is an 18-hole golf course with a 70 par.

White Lake is the name of several lakes in the U.S. state of Michigan. The largest one is formed by the White River flowing to its mouth on Lake Michigan in Muskegon County.

Cypress is an unincorporated community in Jackson County, Florida, United States. It is located near the intersection of U.S. Route 90 and County Road 275, west of Grand Ridge. The Country Club, located in Brookline, Massachusetts, is one of the oldest country clubs in the United States. It holds an important place in golf history, as it is one of the five charter clubs that founded the United States Golf Association, and has hosted numerous USGA tournaments including the 1913 U.S. Open won by then-unknown Francis Ouimet. Today, the club has nearly 1300 members. 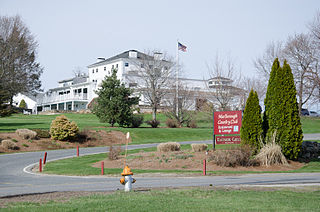 Marlborough Country Club is a private country club open to the public on Mondays and Tuesdays located in Marlborough, Massachusetts, United States. The club formally opened on June 3, 1922. The feature event was a four-ball best-ball match in which Francis Ouimet and his partner Larry Paton defeated Ed Childs and Parker Schofield. Ouimet played a round in 78.

Brae Burn Country Club is a golf course located in West Newton, Massachusetts. Designed by Donald Ross, Brae Burn has hosted seven USGA Championships, including the 1919 U.S. Open, and 1928 U.S. Amateur. Brae Burn is most noted for its diabolical greens, and classic layout.

Montclair is a neighborhood of Quincy, Massachusetts.

Worcester Country Club is a private country club and golf course in Worcester, Massachusetts. The course hosted the first Ryder Cup in 1927, and was the site of the 1925 U.S. Open, which was won by Willie Macfarlane. Worcester also hosted the 1960 U.S. Women’s Open. It was the first, and currently only one of three golf courses in the United States to host the men's and women's U.S. Open Championships and the Ryder Cup. For over half a century Worcester was the only club to have hosted all three events until 2014 when Pinehurst hosted its first U.S. Women’s Open. Hazeltine made it an elite group of three upon its host of the 2016 Ryder Cup, but notably, Hazeltine is not a classic course. Worcester also hosted the first ever U.S. Open qualifying round in 1924. The club is tied with Oyster Harbors for hosting the most Massachusetts Opens (7) and has also hosted 7 Massachusetts Amateur Championships. Worcester is one of a few private clubs in the United States that has a bowling alley in the men’s locker room.

Tremica is an archaeological site in Corsica. It consists of a dolmen with a semicircular capstone, and is located above the village of Casaglione. 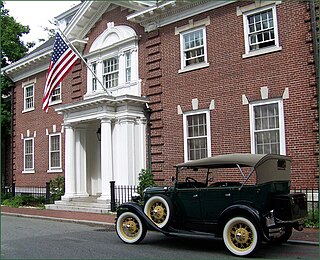 The Owl Club is an all-male final club at Harvard University.

Hale's Island is a 54-acre (22 ha) island located on the Merrimack River in Haverhill / Bradford, Massachusetts. The property is part of Silsby's farm. Although there is not much there now, the island has reportedly been home to a golf course, a hotel, and even a small airport. The golf course was destroyed in 1936 when the island flooded. There is still the remnants of a foundation on the island. This was the foundation of the golf course club house. There are also four artesian wells on the island. Other than that, the island is mostly inhabited by snakes, bugs, and some birds. It is becoming increasingly overgrown these days. There is a stone bridge that connects it to land on the Bradford side. This can barely be seen when the water is low, and impossible when the water is high. The bridge was mostly destroyed in the 1936 flood that destroyed the golf course. The bridge was built to allow cows to move back and forth to the island for grazing. The island is not listed as an airport on any aeronautical charts. More than likely, that reference is to the area of the River on the north side of the island which was listed for landing seaplanes, and connected to an airfield which was previously located on Coffin Rd where there is now a marina.

Slatina is a village in the municipality of Leskovac, Serbia. According to the 2002 census, the village has a population of 639 people.

The 1913 U.S. Open was the 19th U.S. Open, held September 18–20 at The Country Club in Brookline, Massachusetts, a suburb southwest of Boston. Amateur Francis Ouimet, age 20, won his only U.S. Open title in an 18-hole playoff, five strokes ahead of Britons Harry Vardon and Ted Ray.

The 1960 U.S. Women's Open Golf Championship was the 15th U.S. Women's Open, held July 21–23 at Worcester Country Club in Worcester, Massachusetts. It was the eighth conducted by the United States Golf Association (USGA).

Mission Hills of Hayward Golf Course is a 9-hole golf course in Hayward, California. It is managed by the Hayward Area Recreation and Park District. It opened in 1999. The course has a pro shop and offers instruction.

Terre Haute is an unincorporated community in Champaign County, in the U.S. state of Ohio.