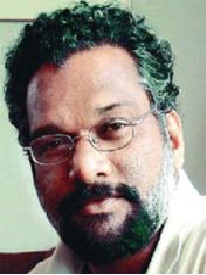 Thachom Poyil Rajeevan, also known as T P Rajeevan, is an Indian novelist and poet who writes in Malayalam and English languages. In English, he has published a novel, and two poetry collections. He has also edited an anthology of poems with Croatian poet, Lana Derkac. His published works in Malayalam include: two novels ; six poetry collections ; a travelogue ; and an essay collection .,, Both of his novels in Malayalam were made into films. Rajeevan was awarded the Kerala Sahitya Akademi Award for his novel KTN Kottor: Ezhuthum Jeevithavum, in 2014. He is also a recipient of the Madras Malayalee Samajam Award and K. Surendran Award.

K. V. Ramakrishna Iyer, better known by his nom de plume, Malayattoor Ramakrishnan, was an Indian writer of Malayalam literature, cartoonist, lawyer, Judicial Magistrate and Indian Administrative Service officer. He was best known for his novels, short stories and biographical sketches and his works include Yanthram, Verukal, Yakshi and Service Story – Ente IAS Dinangal. He received the Kerala Sahitya Akademi Award for Novel in 1967. He was also a recipient of the Vayalar Award in 1971.

P. C. Gopalan (1926–1974), popularly known by his pseudonym, Nandanar was an Indian writer of Malayalam literature. He was known for his novels and short stories which had the backdrop of the Indian Army barracks of the 1940s and 1950s as well as for his children's literature. Anubhavangal, Ira, Thokkukalkkidayile Jeevitham, Athmavinte Novukal, Ariyappedatha Manushyajeevikal, Anubhoothikalude Lokam and a series of stories with Unnikkuttan as the lead character are some of his better known works. He received the Kerala Sahitya Akademi Award for Novel in 1964 for his work, Athmavinte Novukal.

P. Kunjanandan Nair, better known by his pseudonym, Thikkodiyan, was an Indian playwright, novelist, lyricist and screenwriter of Malayalam. He was known for his contributions to the genre of radio plays and his autobiography, Arangu Kaanatha Nadan, which detailed the socio-cultural development of Malabar in the post-independent period, fetched him a number of awards including the Kendra Sahithya Academy Award, Kerala Sahitya Akademi Award for Biography and Autobiography, Vayalar Award and the Odakkuzhal Award.

K. R. Meera is an Indian author, who writes in Malayalam. She was born in Sasthamkotta, Kollam district in Kerala. She worked as a journalist in Malayala Manorama but later resigned to concentrate more on writing. She started writing fiction in 2001 and her first short story collection Ormayude Njarambu was published in 2002. Since then she has published five collections of short stories, two novellas, five novels and two children's books. She won the Kerala Sahitya Akademi Award in 2009 for her short-story, Ave Maria. Her novel Aarachaar (2012) is widely regarded as one of the best literary works produced in Malayalam language. It received several awards including the Kerala Sahitya Akademi Award (2013), Odakkuzhal Award (2013), Vayalar Award (2014) and Kendra Sahitya Akademi Award (2015). It was also shortlisted for the 2016 DSC Prize for South Asian Literature. 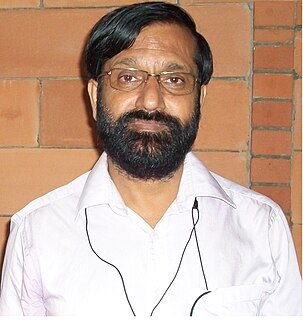 T. V. Kochubava (1955–1999) was an Indian writer of Malayalam literature, known for his novels and short stories. He published twenty three books covering the genres of novels, short stories, translations and plays and was a recipient of a number of awards including the Kerala Sahitya Akademi Award for Novel in 1996, besides several other honours. 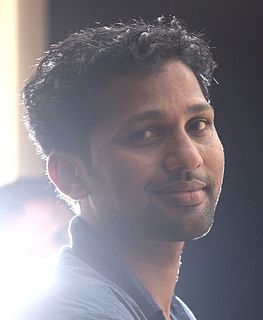 Malappurath Raman Chandrasekharan, popularly known as M.R. Chandrasekharan or simply M. R. C., is a Malayalam literary critic and author from Kerala, India. Chandrasekharan has published more than 40 books in different literary sections like literary criticism, translations, politics, social etc. He is also noted for his work in the field of journalism and education. He won the 2010 Kerala Sahitya Akademi Award for Literary Criticism.

Susmesh Chandroth is a Malayalam-language author from Kerala state, India. He won the first award for the most promising young writer under 35 years of age ‘Yuva Puraskar’ instituted by the Sahithya Academy, Government of India.

Anwar Ali also known Anvar Ali is an Indian poet, lyricist, translator, and documentary filmmaker,, he has been contributing poems and poetic studies in leading literary journals and periodicals of Kerala since 1984; Mazhakkalam, 1999, his first collection of poems established him as one of the prominent voices in contemporary Malayalam poetry; his poems have been translated into various Indian and foreign languages and are included in several anthologies of Malayalam as well as Indian poetry of the post-modern phase. His other important works include Atiyaati Alanja Marangale, collection of poems, 2009, Eternal Sculptures, Poetry Collection in English, 2007, and, I Rappai, Novella, 1995.

Joseph Raphael, better identified as Ponjikkara Rafi, was an Indian essayist, playwright, short story writer and a novelist of Malayalam literature. His oeuvre consists of short story anthologies, novels, philosophical works and screenplays but he is best remembered for two novels, Daivadhoothan, regarded as the first Malayalam novel written in stream of consciousness narrative style, and Ora Pro Nobis, a historical novel based on the Dutch colonial rule. He was also the author of Kaliyugam, a philosophical work jointly written with his wife, Sabeena Rafi, which fetched him the Kerala Sahitya Akademi Award for Miscellaneous Works in 1972.

Sabeena Rafi was an Indian essayist and historian of Malayalam literature. Her oeuvre consists of philosophical works, an autobiography and Chavittu Nadakam - Oru Charithra Padanam, the first historical compendium on Chavittu Nadakam, an operatic dance form. Her book, Kaliyugam, a philosophical work jointly written with her husband, Ponjikkara Rafi, fetched her the Kerala Sahitya Akademi Award for Miscellaneous Works in 1972.

P. R. Shyamala was an Indian novelist and short story writer of Malayalam literature. Known for novels such as Sararanthal and Makayiram Kayal and short stories compiled in Harishri and Ariyapedatha Peedanangal, she was a member of the Sahitya Pravartaka Sahakarana Sanghom, the general council of the Kerala Sahitya Akademi and the advisory board of the Central Board of Film Certification. Three of her stories have been adapted into films and Sararanthal was an award winning television series made in 1991, based on her novel of the same name.