Thought Leader is a collaborative news and opinion platform owned by the South African newspaper Mail & Guardian . It was named a Webby Award Honoree in 2008, won 2008 SA Blog of the Year, and has scored a few firsts, including sending the first South African blogger, Ndumiso Ngcobo, to cover a major political event – the 2007 ANC national conference in Polokwane. [1]

In 2010 it was named as the forum where “most analytic discussion of sexual violence” was taking place by the Tshwaranang Legal Advocacy Centre, which conducted a study on the reporting of sexual violence in South Africa. [2]

The CAF Africa Cup of Nations, officially CAN, also referred to as AFCON, or Total Africa Cup of Nations after its headline sponsor, is the main international men’s association football competition in Africa. It is sanctioned by the Confederation of African Football (CAF) and was first held in 1957. Since 1968, it has been held every two years. The title holders at the time of a FIFA Confederations Cup qualify for that competition.

Alan Hammond was a former Australian rules footballer who played for the Collingwood Football Club in the Victorian Football League (VFL).

Andrea Mitchell is an American television journalist, anchor, and commentator for NBC News, based in Washington, D.C. 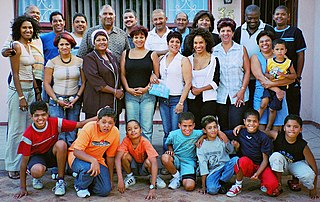 In Southern Africa, Cape Coloureds are an ethnic group composed primarily of persons of mixed race. Although Cape Coloureds form a minority group within South Africa, they are the predominant population group in the Western Cape.

The Rivonia Trial took place in South Africa between 9 October 1963 and 12 June 1964. The Rivonia Trial led to the imprisonment of Nelson Mandela and the others among the accused who were convicted of sabotage and sentenced to life at the Palace of Justice, Pretoria. 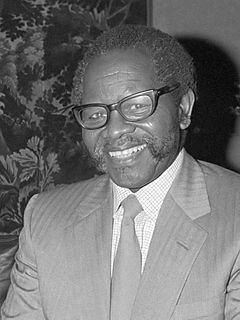 Oliver Reginald Kaizana Tambo, also known as O. R. Tambo, was a South African anti-apartheid politician and revolutionary who served as President of the African National Congress (ANC) from 1967 to 1991. 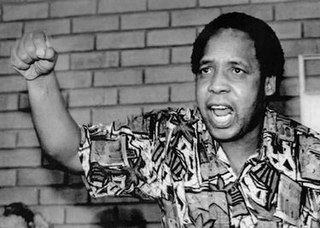 Chris Hani, born Martin Thembisile Hani, was the leader of the South African Communist Party and chief of staff of uMkhonto we Sizwe, the armed wing of the African National Congress (ANC). He was a fierce opponent of the apartheid government, and was assassinated on 10 April 1993.

Anthony James "Tony" Leon is a South African politician who served as leader of the opposition from 1999-2007 as leader of the Democratic Alliance (DA). He led the DA from its inception in 2000, until his retirement from leadership in 2007. Before that, he led the Democratic Party from 1994. He is the longest serving leader of the official opposition in parliament since the advent of democracy in 1994. Although still a member of the DA, he served as the South African Ambassador to Argentina under the ANC government from 2009 to 2012.

Vincent John Maher is the Head of Digital Enablement at Multichoice. Prior to joining Multichoice Maher was the Chief Innovation Officer at Kagiso Media and the Chief Product Officer at Mxit, the mobile social network. Maher joined Mxit in October 2012 when the company acquired mobile community startup Motribe Mobile Networks, of which Maher was the CTO and co-founder. Previously he was the portfolio manager for social media at Vodacom, a South African mobile telecommunications operator. Previously he was the strategist at the Mail & Guardian Online, in Johannesburg, South Africa and the co-founder of the political blog Thought Leader and blog aggregator Amatomu.com. 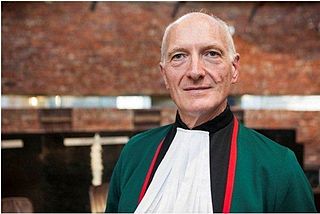 Edwin Cameron was a judge on the Constitutional Court of South Africa. He is well known for his HIV/AIDS and gay-rights activism and was hailed by Nelson Mandela as "one of South Africa's new heroes". 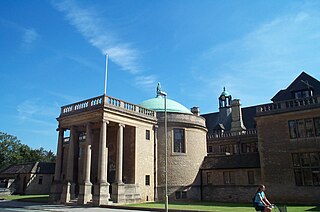 Rhodes House is part of the University of Oxford in England. It is located on South Parks Road in central Oxford, and was built in memory of Cecil Rhodes, an alumnus of the university and a major benefactor. 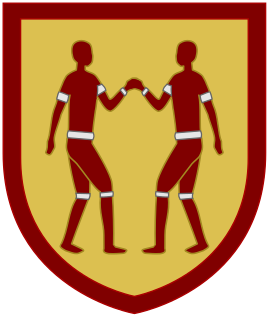 The Judicial Service Commission is a body specially constituted by the South African Constitution to recommend persons for appointment to the judiciary of South Africa.

The Constitution of South Africa protects all basic political freedoms. However, there have been many incidents of political repression, dating back to at least 2002, as well as threats of future repression in violation of this constitution leading some analysts, civil society organisations and popular movements to conclude that there is a new climate of political repression or a decline in political tolerance. Bishop Rubin Phillip has said that "a dark night is settling over our country as the light of our democratic dawn dims". Some have linked the increase in repression to the influence of the 'security cluster' under the Jacob Zuma presidency.

Matthew Buckland was a South African Internet entrepreneur and businessman who founded and exited digital agency and publisher Creative Spark, acquired in 2015 by UK firm M&C Saatchi PLC, the holding group of M&C Saatchi. Buckland was also the founder of Burn Media, a suite of technology publishing brands which includes Memeburn, Ventureburn.com, Gearburn.com and others.

Mandela: Long Walk to Freedom is a 2013 British-South African biographical film directed by Justin Chadwick from a script written by William Nicholson and starring Idris Elba and Naomie Harris. The film is based on the 1995 autobiographical book Long Walk to Freedom by anti-apartheid revolutionary and former South African President Nelson Mandela.

ZANEWS is a South African satirical puppet show first produced in 2008 by Both Worlds, a Cape Town based production company. The show is a daily and weekly satirical news programme in the form of a mock puppet television newscast and features on both the web and TV. ZANEWS features key local and international political figures and celebrities. For eight seasons, ZANEWS has been using its puppet cast as mouthpieces for satirical commentary on South Africa's public space.