In one instance [2] Ellen White, a 19th-century Christian author, expressed it this way:

"The Bible is written by inspired men, but it is not God's mode of thought and expression. It is that of humanity. God, as a writer, is not represented. Men will often say such an expression is not like God. But God has not put Himself in words, in logic, in rhetoric, on trial in the Bible. The writers of the Bible were God's penmen, not His pen. Look at the different writers.

It is not the words of the Bible that are inspired, but the men that were inspired. Inspiration acts not on the man's words or his expressions but on the man himself, who, under the influence of the Holy Ghost, is imbued with thoughts. But the words receive the impress of the individual mind. The divine mind is diffused. The divine mind and will is combined with the human mind and will; thus the utterances of the man are the word of God." 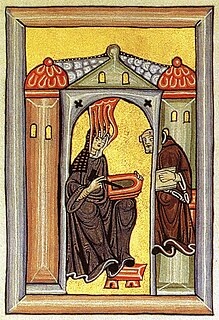 In religion and theology, revelation is the revealing or disclosing of some form of truth or knowledge through communication with a deity or other supernatural entity or entities.

Dei verbum, the Second Vatican Council's Dogmatic Constitution on Divine Revelation, was promulgated by Pope Paul VI on 18 November 1965, following approval by the assembled bishops by a vote of 2,344 to 6. It is one of the principal documents of the Second Vatican Council, indeed their very foundation in the view of one of the leading Council Fathers, Bishop Christopher Butler. The phrase "Dei verbum" is Latin for "Word of God" and is taken from the first line of the document, as is customary for titles of major Catholic documents.

Biblical inerrancy is the belief that the Bible "is without error or fault in all its teaching"; or, at least, that "Scripture in the original manuscripts does not affirm anything that is contrary to fact". Some equate inerrancy with biblical infallibility; others do not. The belief is of particular significance within parts of evangelicalism, where it is formulated in the "Chicago Statement on Biblical Inerrancy".

Accommodation is the theological principle that God, while being in His nature unknowable and unreachable, has nevertheless communicated with humanity in a way which humans can understand and respond to. The concept is that scripture has accommodated, or made allowance for, the original audience's language and general level of understanding. Often included in these ideas is the notion of human sinfulness or capacity; so in other words God accommodates himself to the human capacities of those to whom biblical revelation is given.

Biblical infallibility is the belief that what the Bible says regarding matters of faith and Christian practice is wholly useful and true. It is the "belief that the Bible is completely trustworthy as a guide to salvation and the life of faith and will not fail to accomplish its purpose.

The traditional concept of an immaterial and immortal soul distinct from the body was not found in Judaism before the Babylonian exile, but developed as a result of interaction with Persian and Hellenistic philosophies. Accordingly, the Hebrew word נֶ֫פֶשׁ, nephesh, although translated as "soul" in some older English Bibles, actually has a meaning closer to "living being". Nephesh was rendered in the Septuagint as ψυχή (psūchê), the Greek word for soul. The New Testament also uses the word ψυχή, but with the Hebrew meaning and not the Greek. 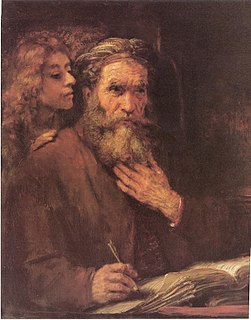 Biblical inspiration is the doctrine in Christian theology that the human authors and editors of the Bible were led or influenced by God with the result that their writings may be designated in some sense the word of God.

Biblical literalism or biblicism is a term used differently by different authors concerning biblical interpretation. It can equate to the dictionary definition of literalism: "adherence to the exact letter or the literal sense", where literal means "in accordance with, involving, or being the primary or strict meaning of the word or words; not figurative or metaphorical".

The New Church is the name for several historically related Christian denominations that developed as a new religious group, influenced by the writings of scientist and Swedish Lutheran theologian Emanuel Swedenborg (1688–1772). According to Swedenborg, he received a new revelation from Christ in visions he experienced over a period of at least twenty-five years. He predicted in his writings that God would replace the traditional Christian Church, establishing a New Church that would worship Jesus Christ as God. According to New Church doctrine, each person must cooperate in repentance, reformation, and regeneration.

The theology of the Seventh-day Adventist Church resembles that of Protestant Christianity, combining elements from Lutheran, Wesleyan-Arminian, and Anabaptist branches of Protestantism. Adventists believe in the infallibility of Scripture and teach that salvation comes from grace through faith in Jesus Christ. The 28 fundamental beliefs constitute the church's official doctrinal position.

Seventh-day Adventists believe church co-founder Ellen G. White (1827–1915) was inspired by God as a prophet, today understood as a manifestation of the New Testament "gift of prophecy," as described in the official beliefs of the church. Her works are officially considered to hold a secondary role to the Bible, but in practice there is wide variation among Adventists as to exactly how much authority should be attributed to her writings. With understanding she claimed was received in visions, White made administrative decisions and gave personal messages of encouragement or rebuke to church members. Seventh-day Adventists believe that only the Bible is sufficient for forming doctrines and beliefs, a position Ellen White supported by statements inclusive of, "the Bible, and the Bible alone, is our rule of faith".

The 1888 Minneapolis General Conference Session was a meeting of the General Conference of Seventh-day Adventists held in Minneapolis, Minnesota, in October 1888. It is regarded as a landmark event in the history of the Seventh-day Adventist Church. Key participants were Alonzo T. Jones and Ellet J. Waggoner, who presented a message on justification supported by Ellen G. White, but resisted by leaders such as G. I. Butler, Uriah Smith and others. The session discussed crucial theological issues such as the meaning of "righteousness by faith", the nature of the Godhead, the relationship between law and grace, and Justification and its relationship to Sanctification.

The 1919 Bible Conference was a Seventh-day Adventist Church conference or council held from July 1 to August 9, 1919, for denominational leaders, educators, and editors to discuss theological and pedagogical issues. The council was convened by the General Conference Executive Committee led by A. G. Daniells, the president of the General Conference. The meetings included the first major discussion of the inspiration of Ellen G. White’s writings after her death in 1915, and the far-reaching theological scope of the discussions would generate considerable controversy.

Divine inspiration is the concept of a supernatural force, typically a deity, causing a person or people to experience a creative desire. It has been a commonly reported aspect of many religions, for thousands of years. Divine inspiration is often closely tied to the concept of revelation, the belief in information being revealed or disclosed through communication with a deity or other supernatural entity or entities.

Verbal dictation describes a theory about how the Holy Spirit was involved with the people who first physically inscribed the Bible. According to this theory, the human role was a purely mechanical one: their individuality was by-passed whilst they wrote, and neither did their cultural background have any influence on what they wrote, because these writers were under the control of God. This may have been the original understanding of inspiration for the people of the Bible.

In Protestant theology, verbal plenary preservation (VPP) is a doctrine concerning the nature of the Bible. While verbal plenary inspiration ("VPI") applies only to the original autographs of the Bible manuscript, VPP views that, "the whole of Scripture with all its words even to the jot and tittle is perfectly preserved by God in the apographs without any loss of the original words, prophecies, promises, commandments, doctrines, and truths, not only in the words of salvation, but also the words of history, geography and science; and every book, every chapter, every verse, every word, every syllable, every letter is infallibly preserved by the Lord Himself to the last iota so that the Bible is not only infallible and inerrant in the past, but also infallible and inerrant today ."