Three is the third solo album by Canadian indie rock musician Joel Plaskett, released on March 24, 2009. [2] Plaskett produced and recorded the album himself at his own Scotland Yard studio in Dartmouth, Nova Scotia.

In addition to being released as a triple album, the number three is reflected in several other aspects of the album. Each disc has nine songs on it, many of which are titled with a single word or phrase repeated three times. The album's release date of 3/24/09 also consists of numbers divisible by three, the cover features an image of Plaskett holding three fingers up, and preorders through MapleMusic were distributed with access to exclusive tickets, priced at $66, which would entitle the purchaser to a seat in the first twelve rows of Plaskett's concert at Toronto's Massey Hall the night before the album's release. [2] According to Plaskett, the discs tell a story of "going away, being alone and coming home", with each disc representing one of those three themes. [3]

Guest musicians on the album include singers Ana Egge and Rose Cousins, who were at the Folk Alliance festival in Memphis in 2007. The three of them tried jamming at Easley McCain Recording in Memphis, and Plaskett decided he wanted to have them on his new album and write parts for them. [4] Plaskett's father Bill was also a significant contributor to the album, offering songwriting and arranging, vocals, and playing bouzouki, acoustic guitar, tenor guitar, and piano. [3]

The album was shortlisted for the 2009 Polaris Music Prize. [5] [6] It won Contemporary Album of the Year at the 2009 Canadian Folk Music Awards.

In June 2009, Plaskett released a follow-up EP, entitled Three More, which contained three songs not featured on the original album.

In 2010, Plaskett released a condensed version of Three called Three to One primarily for the non-Canadian market. [7]

All tracks are written by Joel Plaskett, except where noted. 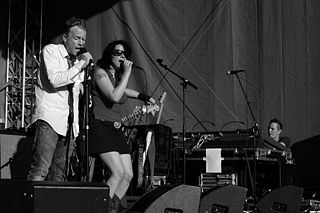 Stars is a Canadian indie pop/rock band based in Montreal, Quebec. Since forming in 2000, they have released nine albums and a number of EPs. Their music has been nominated for two Juno Awards and two Polaris Music Prizes.

Thrush Hermit was a Canadian alternative rock band active in the 1990s, known for their "highly energetic, humorous, and unpredictable performances," as quoted by Vice News.

Dayna Manning is a Canadian folk and pop singer-songwriter, as well as a producer and sound engineer. As a teenager she released her first album, Volume 1, on EMI and Nettwerk, with featured musicians including Sean Lennon and Melanie Doane. A single from the album reached #15 on the MuchMusic top hits chart in Canada, and she was nominated for the 1998 Juno Award for Best New Artist.

Two Hours Traffic was a Canadian indie rock band, based in Charlottetown, Prince Edward Island. They are named after a line in the prologue to Shakespeare’s Romeo and Juliet. Critics have drawn comparisons to 1970s power pop band Big Star, but the band members tend to cite Nick Lowe as a prime influence. The band was nominated for the Polaris Music Prize in 2008 for the album Little Jabs. In 2013, the band performed on their final tour, disbanding afterward. 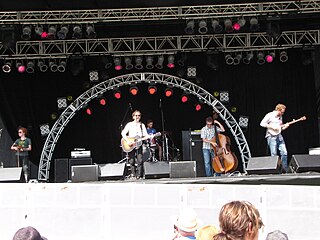 Little Jabs is the second full-length studio album by Canadian indie rock band Two Hours Traffic, released on Bumstead Records on July 24, 2007. The album was produced by Joel Plaskett, and recorded in Halifax and Toronto. 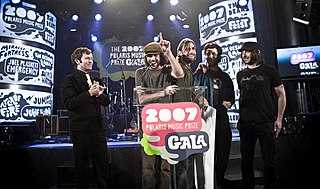 The 2007 edition of the Canadian Polaris Music Prize was presented on September 24, 2007 at the Phoenix Concert Theatre in Toronto. 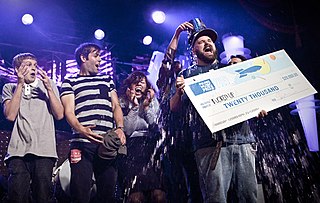 Territory is the third full-length studio album by Canadian indie rock band Two Hours Traffic, and the follow-up to their Polaris Prize-nominated Little Jabs. It was released on September 8, 2009 on Bumstead Records. The album was produced by Joel Plaskett. The band toured Canada in September and October 2009 in support of the album. 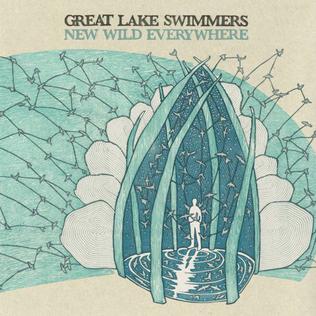 Scrappy Happiness is an album by Joel Plaskett Emergency released on March 27, 2012. The album followed a unique release strategy, in which the band recorded one song each week for ten weeks, immediately releasing it for airplay on CBC Radio 2 and CBC Radio 3 and to iTunes for sale as a single, before releasing the 10 songs as a complete album in conventional formats on March 27.

Mo Kenney is a Canadian singer/songwriter based in Dartmouth, Nova Scotia. Catching the ear of noted Canadian rocker Joel Plaskett while still in school, Kenney released her first album in 2012, which Plaskett produced. Kenney is known for her lyrical prowess and engaging stage presence. Called "Nova Scotia's rising star" by The Scene magazine, she has toured with Plaskett as well as with Ron Sexsmith. In 2013, her song "Sucker" won the prestigious SOCAN Songwriting Prize.

Trent Severn is a Canadian folk trio composed of Emm Gryner, Dayna Manning, and Lindsay Schindler. Founded in 2011, all three women share vocal duties and contribute to the songwriting process. They released their self-titled debut album in November 2012, under the imprint Dead Daisy Records. The band was nominated for two 2013 Canadian Folk Music Awards, and toured and performed around Canada until announcing a hiatus on January 21, 2019.

44 is the sixth solo album by Canadian indie rock musician Joel Plaskett, released on April 17, 2020. Dubbed the "spiritual successor" to Plaskett's prior triple album Three, the 44-song, quadruple album was released the day before the artist's 45th birthday. Plaskett recorded the album across Dartmouth, Nova Scotia, Memphis, Nashville and Toronto, having worked with 33 other musicians over four years.