The Three Counties of England are traditionally the three agrarian counties of Gloucestershire, Herefordshire and Worcestershire.

Including towns and cities such as Worcester, Gloucester, Cheltenham, Hereford, Leominster, Stourbridge, Evesham, Malvern and Kidderminster, they extend from the southern boundaries of Birmingham in the north to Bristol in the south. Traditionally rugby union and cricket playing areas, there is a Three Counties Showground situated in the Worcestershire town of Malvern that holds an annual agricultural show, and the area is also referred to in the names of local businesses and in the Three Counties Cider and Perry Association – the popular apple and pear derived alcoholic beverages, many of which are made in this area. 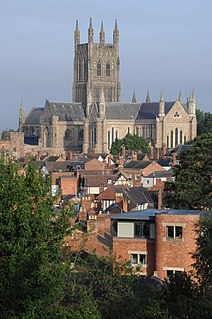 Worcester is a city in Worcestershire, England, 31 miles (50 km) southwest of Birmingham, 101 miles (163 km) west-northwest of London, 27 miles (43 km) north of Gloucester and 23 miles (37 km) northeast of Hereford. The population is approximately 100,000. The River Severn flanks the western side of the city centre, which is overlooked by Worcester Cathedral. 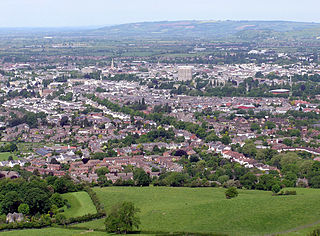 Cheltenham is a regency spa town and borough on the edge of the Cotswolds, an Area of Outstanding Natural Beauty in Gloucestershire, England. Cheltenham has been a health and holiday spa town resort since the discovery of mineral springs in 1716 and has a number of internationally renowned and historic schools.

Hereford is a cathedral city, civil parish and county town of Herefordshire, England. It lies on the River Wye, approximately 16 miles (26 km) east of the border with Wales, 24 miles (39 km) southwest of Worcester, and 23 miles (37 km) northwest of Gloucester. With a population of 58,896, it is the largest settlement in the county.

The Three Choirs Festival is a festival of sacred choral music which has been held since 1724. [1] It rotates between the three county towns (Worcester, Hereford and Gloucester). It often features music by local composer Edward Elgar.

The Three Choirs Festival is a music festival held annually at the end of July, rotating among the cathedrals of the Three Counties and originally featuring their three choirs, which remain central to the week-long programme. The large-scale choral repertoire is now performed by the Festival Chorus, but the festival also features other major ensembles and international soloists. The 2011 festival took place in Worcester from 6 to 13 August. The 2012 festival in Hereford took place earlier than usual, from 21 to 28 July, to avoid clashing with the 2012 Summer Olympics. The event is now established in the last week of July. The 300th anniversary of the original Three Choirs Festival was celebrated during the 2015 festival, which took place from 25 July to 1 August in Hereford.

Sir Edward William Elgar, 1st Baronet was an English composer, many of whose works have entered the British and international classical concert repertoire. Among his best-known compositions are orchestral works including the Enigma Variations, the Pomp and Circumstance Marches, concertos for violin and cello, and two symphonies. He also composed choral works, including The Dream of Gerontius, chamber music and songs. He was appointed Master of the King's Musick in 1924. 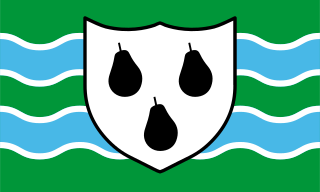 Worcestershire is a county in the West Midlands of England. Between 1974 and 1998, it was merged with the neighbouring county of Herefordshire as Hereford and Worcester. 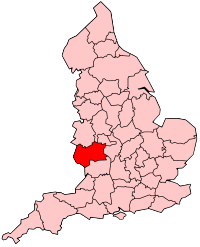 Hereford and Worcester was an English county created on 1 April 1974 by the Local Government Act 1972 from the areas of the former administrative county of Herefordshire, most of Worcestershire and the county borough of Worcester. An aim of the Act was to increase efficiency of local government: the two counties are among England's smaller and less populous counties, particularly after the same Act transferred some of Worcestershire's most urbanised areas to the West Midlands.

Malvern is a spa town and civil parish in Worcestershire, England. It lies at the foot of the Malvern Hills, a designated Area of Outstanding Natural Beauty. The centre of Malvern, Great Malvern, is a historic conservation area, which grew dramatically in Victorian times due to the natural mineral water springs in the vicinity, including Malvern Water.

Malvern Hills is a local government district in Worcestershire, England. Its council is based in the town of Malvern, and its area covers most of the western half of the county, including the small towns of Tenbury and Upton. It was originally formed in 1974 and was subject to a significant boundary reform in 1998. In the 2011 census the population of the Malvern Hills district was 74,631.

Great Malvern is an area of the spa town of Malvern, Worcestershire, England. It lies at the foot of the Malvern Hills, a designated Area of Outstanding Natural Beauty, on the eastern flanks of the Worcestershire Beacon and North Hill, and is the historic centre of Malvern and includes its town centre.

Leominster (district) was a local government district in England from 1 April 1974 to 1 April 1998 with its administrative seat in the town of Leominster.

Malvern Town Football Club is a football club based in Malvern, Worcestershire, England. They are currently members of the West Midlands (Regional) League Premier Division and play at the Langland Stadium. 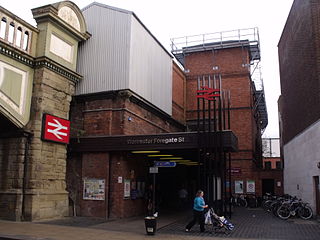 Worcester Foregate Street railway station, opened by the Great Western Railway in 1860 in the centre of Worcester, England, is the smaller of the two stations serving the city, but more centrally located. The other station, Worcester Shrub Hill, is to the east. 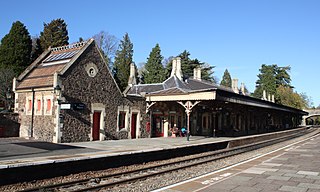 Great Malvern railway station is one of two stations serving the town of Malvern, Worcestershire, England on the Hereford to Worcester section of the Cotswold Line. It is situated downhill from the centre of Great Malvern and near to Barnards Green. The station retains most of its original Victorian station design by the architect Edmund Wallace Elmslie and is a Grade II listed building.

Malvern Link railway station serves Malvern Link in Worcestershire, England. It is one of two stations serving the town of Malvern, the other being Great Malvern station. 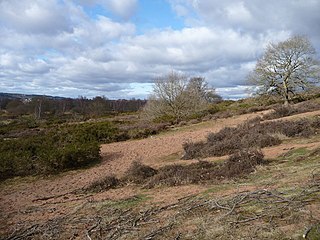 Poolbrook is a village and a suburb of Malvern, Worcestershire, England, situated approximately 1.5 miles (2.4 km) southeast of Great Malvern, the town's centre, and about 0.5 miles (08 km) from the Malvern suburb of Barnards Green on the Poolbrook Road (B4208). The village comprises several shops, a traditional English pub, and a number of council and private housing estates. St Andrew's C of E parish church was built in Early English style in 1882 as a memorial to a member of the Chance Brothers glass manufacturing family. The village occupies the geographical centre of the Chase ward of Malvern Town Council.

Sunshine Radio is a British radio station which broadcasts to Herefordshire and Monmouthshire areas of the West Midlands and South Wales respectively from its studios in Hereford. It is operated by Murfin Media Ltd, and previously by Laser Broadcasting.

Sherrard's Green is a village and a suburb of Malvern, Worcestershire, England, situated approximately 1.5 miles southeast of Great Malvern, the town's centre, and about 0.5 miles (0.80 km) from the Malvern suburb of Barnards Green. The village comprises a number of council and private housing estates and a small modern C of E church, and a Tesco convenience store that opened in 2011 on the site of a former pub, The New Gas Tavern.

The boundaries of Worcestershire, England have been fluid for over 150 years since the first major changes in 1844. There were many detached parts of Worcestershire in the surrounding counties, and conversely there were islands of other counties within Worcestershire. The 1844 Counties Act began the processing of eliminating these, but the process was not completed until 1966, when Dudley was absorbed into Staffordshire.