Last updated September 28, 2019
Not to be confused with Three Days of Rain.

Three Days of Rain is a 2002 American film directed by Michael Meredith and starring Penelope Allen, Erick Avari, and Alimi Ballard. Based on Anton Chekhov's short stories, the plot takes place in Cleveland city during a rainstorm. It was the last film to star Peter Falk, famous for playing disheveled detective Columbo. [1] [2]

Michael Shane Meredith is an American independent film director, screenwriter and producer. He frequently collaborates with German director Wim Wenders. Meredith is the son of the late former Dallas Cowboys quarterback and football commentator Don Meredith. He was the oldest of two children from Don Meredith's second marriage to the artist Cheryl King. 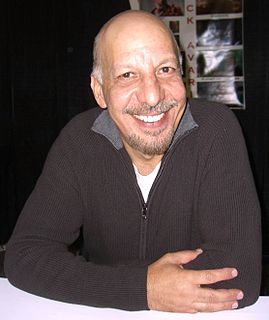 Erick Avari is an American television, film and theater actor known primarily for his roles in science-fiction serial productions, including Stargate (1994), Independence Day (1996) and The Mummy (1999).

Three Days of Rain is a film from 2002 that takes six short stories of Anton Chekov and sets them in modern-day Cleveland, Ohio. The film opens as a storm rolls into Cleveland that will bring rain for three straight days. The film follows six separate people through their unique struggles and challenges. There is a young woman who is forced to give up her daughter and is willing to do anything to be with her. Another character is a cab driver who struggles to cope with the loss of his son. There is Thunder (Michael Santoro), who is a tile maker who is fighting to keep his business from going under, and Denis (Joey Billow), a mentally handicapped Janitor who is faced with losing his job. Through the entire film there is soft jazz and the banter of a local Cleveland disk jockey, the jazz also doubles as the film's soundtrack. 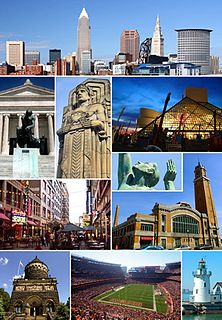 Cleveland is a city in the U.S. state of Ohio, and the county seat of Cuyahoga County. The city proper has a population of 383,793, making it the 52nd-largest city in the United States and the second-largest city in Ohio. Greater Cleveland is ranked as the 33rd-largest metropolitan area in the U.S., with 2,057,009 people in 2018. A Gamma + city, Cleveland anchors the Cleveland–Akron–Canton Combined Statistical Area, which had a population of 3,515,646 in 2010 and is ranked 15th in the United States. 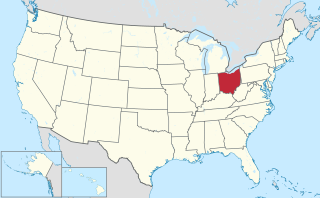 Alimi Ballard Stiller is an American television actor. He is best known for his role as FBI agent David Sinclair on the CBS police procedural, Numb3rs. Ballard recently starred in the ABC legal thriller, The Catch.

Chuck Cooper is an American actor. He won the 1997 Tony Award for Best Performance by a Featured Actor in a Musical, for his performance as the pimp Memphis in The Life. 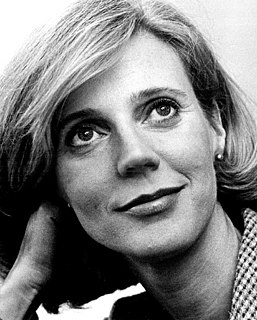 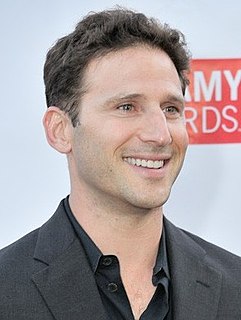 Mark Feuerstein is an American actor. He first came to public notice in a guest appearance in an episode of Season 2 of Sex and the City and went on to appear in TV series The West Wing (2001–2005), Royal Pains (2009–2016) and Prison Break (2017). He produced as well as starred in the short-lived CBS sitcom 9JKL.

George Kuchar was an American underground film director and video artist, known for his "low-fi" aesthetic. 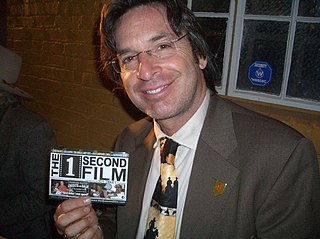 Robert Reed Carradine is an American actor. A member of the Carradine family, he made his first appearances on television western series such as Bonanza and his late brother David's TV series, Kung Fu. Carradine's first film role was in the 1972 film The Cowboys, which starred John Wayne and Roscoe Lee Browne. Carradine also portrayed fraternity president "Lewis Skolnick" in the Revenge of the Nerds series of comedy films. 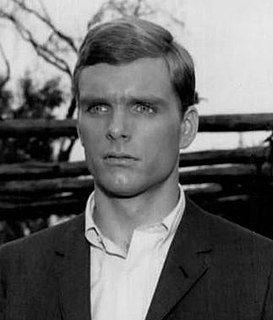 Keir Atwood Dullea is an American actor best known for his portrayals of astronaut David Bowman in the 1968 film 2001: A Space Odyssey and its 1984 sequel, 2010: The Year We Make Contact. His other film roles include Bunny Lake Is Missing (1965) and Black Christmas (1974). He studied acting at the Neighborhood Playhouse School of the Theatre in New York City. 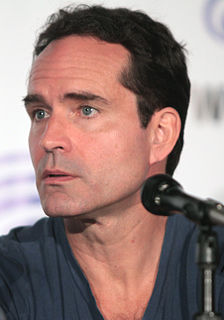 Jason Patric is an American film, television and stage actor. He is known for his roles in the films as Michael Emerson in The Lost Boys and other films such as Rush, Sleepers, Geronimo: An American Legend, Your Friends & Neighbors, Narc, The Losers, The Alamo, and Speed 2: Cruise Control. His father was actor/playwright Jason Miller and his maternal grandfather was actor Jackie Gleason.

Peter Michael Falk was an American actor, known for his role as Lieutenant Columbo in the long-running television series Columbo (1968–2003), for which he won four Primetime Emmy Awards and a Golden Globe Award (1973). He first starred as Columbo in two 90-minute TV pilots; the first with Gene Barry in 1968 and the second with Lee Grant in 1971. The show then aired as part of The NBC Mystery Movie series from 1971 to 1978, and again on ABC from 1989 to 2003.

Columbo is an American television series starring Peter Falk as Columbo, a homicide detective with the Los Angeles Police Department. The character and show, created by Richard Levinson and William Link, popularized the inverted detective story format, which begins by showing the commission of the crime and its perpetrator; the plot therefore usually has no "whodunit" element, and instead revolves around how a perpetrator known to the audience will finally be caught and exposed.

Mr. Deeds is a 2002 American comedy film directed by Steven Brill and starring Adam Sandler and Winona Ryder. The movie is a remake of the 1936 Frank Capra film Mr. Deeds Goes to Town, and also stars Peter Gallagher, John Turturro, Allen Covert and Steve Buscemi. The movie was produced by Happy Madison and New Line Cinema and was distributed by Columbia Pictures. 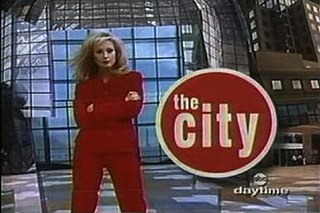 The City is an American television soap opera that aired on ABC from November 13, 1995 to March 28, 1997. The series was a continuation of the serial Loving, which ran from 1983 until 1995, and featured the surviving central characters of its final major story arc, which saw most of the show's characters fall victim to a serial killer. The characters that survived moved from Corinth, Pennsylvania to New York City and settled in the Manhattan neighborhood of SoHo.

Thomas John Mitchell was an American actor. Among his most famous roles in a long career are those of Gerald O'Hara in Gone with the Wind, Doc Boone in Stagecoach, Uncle Billy in It's a Wonderful Life and Mayor Jonas Henderson in High Noon. Mitchell was the first male actor to win an Oscar, an Emmy, and a Tony Award. 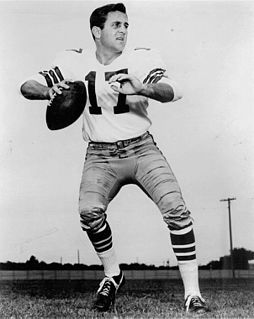 Joseph "Dandy" Don Meredith was an American football quarterback, sports commentator and actor. He spent all nine seasons of his professional playing career (1960–1968) with the Dallas Cowboys of the National Football League (NFL). He was named to the Pro Bowl in each of his last three years as a player. He subsequently became a color analyst for NFL telecasts from 1970–1984. As an original member of the Monday Night Football broadcast team on the American Broadcasting Company (ABC), he famously played the role of Howard Cosell's comic foil. Meredith was also an actor who appeared in a dozen films and in seven major television shows, some of which had him as the main starring actor. He is probably familiar to television audiences as Bert Jameson, a recurring role he had in Police Story. 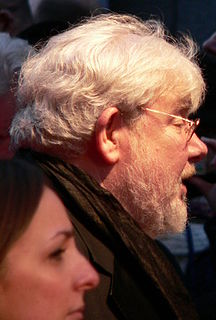 Patrick Moody Williams was an Oscar-nominated American composer, arranger, and conductor who worked in many genres of music, and in film and television.

...All the Marbles is a 1981 comedy-drama film about the trials and travails of a female wrestling tag team and their manager. It was directed by Robert Aldrich and stars Peter Falk, Vicki Frederick and Laurene Landon. The Pittsburgh Steeler hall of famer "Mean" Joe Greene plays himself.

Mark Dawidziak is an American author and critic.

"The Art of Reckoning" is the 21st episode of the third season of the American television show Numb3rs. In the episode, Federal Bureau of Investigation (FBI) agents investigate the confessions of a mob hit man before his execution. Written by Julie Hébert, the episode also highlighted the return of series regular Peter MacNicol as his character, Dr. Larry Fleinhardt, returned from space.

"Disturbed" is the 21st episode of the fifth season of the American television show Numb3rs. In the episode written by series creators/executive producers Cheryl Heuton and Nicolas Falacci, skeptical Federal Bureau of Investigation (FBI) agents track an undetected serial killer while their math consultant copes with his brother's recent injury. After FBI Special Agent Don Eppes's injury, FBI Special Agent David Sinclair, who was the newest member of the team at the beginning of the series, served as team leader. Falacci and Heuton also included Easter eggs from the "Pilot" and from some of the previous 99 episodes.

Columbo or Lieutenant Columbo is the eponymous main character in the successful detective crime drama series Columbo. The character is a shrewd but inelegant blue-collar homicide detective whose trademarks include his shambling manner, rumpled beige raincoat and off-putting, relentless investigative approach.

Fairway Film Alliance is a US distribution and production company that has produced eight films and distributed sixty titles.