Three Forks is a locale where the main fork of the Owyhee River converges with the North Fork and Middle Fork in Malheur County, Oregon. [1]

Locale is the geographic place at which there is or was human activity. It does not include populated places, mines, and dams. Locale indicates locations of present more dispersed, periodic or temporary human activity, such as a crossroad, a camp, a farm, a landing, a railroad siding, a ranch, a windmill or one of any of the various types of agricultural, communication, infrastructure or transport stations where human activities are carried out.

The North Fork Owyhee River is a tributary, about 30 miles (48 km) long, of the Owyhee River in Malheur County, Oregon, and Owyhee County, Idaho, in the United States. It begins on the east flank of the Owyhee Mountains in Idaho and flows generally southwest to meet the main stem at Three Forks, Oregon, 161 miles (259 km) above the confluence of the larger river with the Snake River.

The Snake War (1864–1868) was an irregular war fought by the United States of America against the "Snake Indians," the settlers' term for Northern Paiute, Bannock and Western Shoshone bands who lived along the Snake River. Fighting took place in the states of Oregon, Nevada, and California, and in Idaho Territory. Total casualties from both sides of the conflict numbered 1,762 dead, wounded, or captured.

Owyhee County is a county in the southwestern corner of the U.S. state of Idaho. As of the 2010 census, the population was 11,526. The county seat is Murphy, and its largest city is Homedale. In area it is the second-largest county in Idaho, behind Idaho County.

The Bruneau River is a 153-mile-long (246 km) tributary of the Snake River, in the U.S. states of Idaho and Nevada. It runs through a narrow canyon cut into ancient lava flows in southwestern Idaho. The Bruneau Canyon, which is up to 1,200 feet (370 m) deep and 40 miles (64 km) long, features rapids and hot springs, making it a popular whitewater trip.

The Little Humboldt River is a tributary of the Humboldt River, approximately 60 miles (97 km) long, in northern Nevada in the western United States. It is an intermittent stream draining a rugged area on the edge of the Owyhee Desert in the Great Basin.

The Owyhee Desert ecoregion, within the deserts and xeric shrublands biome, is in the Northwestern United States. The Owyhee Uplands Byway passes through the desert. 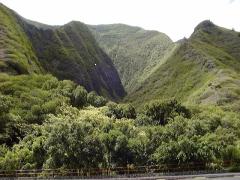 Bruneau is an unincorporated community in Owyhee County in the southwestern part of the U.S. state of Idaho. The mouth of the Bruneau River is to the northwest and Bruneau Sand Dunes State Park is to the east. As of 2014, Bruneau has a population of 552.

The Owyhee River Wilderness is located on the high basalt plateaus of Owyhee County in southwestern Idaho in the western United States. The wilderness area is named after and protects the upper Owyhee River, its tributaries, and the surrounding desert canyon landscape. Whitewater rafting is a popular recreational activity in this wilderness area. Managed by the Bureau of Land Management, it is the second-largest U.S. Wilderness Area that is not located within a National Forest, National Park, or National Wildlife Refuge. The BLM's Black Rock Desert Wilderness, located within Black Rock Desert – High Rock Canyon Emigrant Trails National Conservation Area, is larger. About 67.3 miles (108.3 km) of the Owyhee River is classified as a wild river.

The Clearwater River is in the northwestern United States, in north central Idaho. Its length is 74.8 miles (120.4 km), it flows westward from the Bitterroot Mountains along the Idaho-Montana border, and joins the Snake River at Lewiston. In October 1805, the Lewis and Clark Expedition descended the Clearwater River in dugout canoes, putting in at "Canoe Camp," five miles (8 km) downstream from Orofino; they reached the Columbia Bar and the Pacific Ocean about six weeks later.

Camp Henderson was a military outpost in the District of Oregon in 1864, built on Crooked Creek about five miles from where it joins the Owyhee River, 330 miles from Walla Walla. The camp was located at the foot of cliffs on the east side of the valley south of an historical marker located along the highway about six miles east of Burns Junction, Oregon.

The Battle of Owyhee River took place during the Snake War in 1866 in response to Paiute attacks along the Owyhee River earlier that year.

The North Fork Owyhee Wilderness is on the high basalt plateaus of Owyhee County in southwestern Idaho in the western United States. The rivers within it offer whitewater rapids up to Class IV. The upper 20.8 miles (33.5 km) of the North Fork Owyhee River, from the Idaho–Oregon border to the upstream boundary of the wilderness, are part of the National Wild and Scenic Rivers System. Of this total, 15.1 miles (24.3 km) are classified as wild and the remaining 5.7 miles (9.2 km) are classified "recreational".

The Middle Fork Owyhee River is a tributary of the North Fork Owyhee River in Malheur County, Oregon, and Owyhee County, Idaho, in the United States. It forms along Juniper Mountain, south of the Owyhee Mountains in Idaho. From its headwaters, it flows southwest then curves northwest to and beyond the Idaho–Oregon border, then turns north to meet the North Fork at Three Forks, Oregon. The confluence is less than a mile upstream from the North Fork's confluence with the Owyhee River. Below Three Forks, the main stem Owyhee flows 161 miles (259 km) to empty into the Snake River.

Coldwater Creek is a stream in Miami County, Kansas and Cass County, Missouri in the United States. It is a tributary of the South Fork of the South Grand River.

Louis Henry Marshall (1827–1891) was a native of Virginia, a U. S. Army officer on the frontier in the Antebellum Period, in the American Civil War and in the Snake War.