Three Peaks may refer to:

The National Three Peaks Challenge is an event in which participants attempt to climb the highest mountains of England, Scotland and Wales within 24 hours. It is frequently used to raise money for charitable organisations. Walkers climb each peak in turn, and are driven from the foot of one mountain to the next. The three peaks are:

The Three Peaks Yacht Race is held each year in June in the United Kingdom since 1977. It is based on an idea of Bill Tilman, who had advocated a Three Peaks Challenge route without using motorised transport. His doctor, Rob Haworth, with colleague Merfyn Jones developed the idea into a race.

The hills of Whernside, Ingleborough and Pen-y-ghent are collectively known as the Three Peaks. The peaks, which form part of the Pennine range, encircle the head of the valley of the River Ribble in the Yorkshire Dales National Park in the North of England.

The Australian Three Peaks Race is a short-handed offshore sailing and endurance mountain running event that was held in Tasmania, the southern-most state of Australia, over the Easter long weekend. The first race was in 1989 and the race was conducted annually until Easter 2013.

The Three Peaks Challenge is a mountain running trail of some 50km first done by Carl Wilhelm Schneeberger in March 1897. The challenge comprises ascending the three major peaks above Cape Town, namely Devil's Peak, Table Mountain and Lion's Head. Schneeberger completed the course in 9h5m, not counting his rest stops at the old Johannesburg Hotel in Long Street after each peak. On the centenary of Schneeberger's feat, Don Hartley and a group of 13 runners took on the challenge on 13 September 1997. In 2001 Chad Ulansky set a new record at 5h27m29s, a record which stood until 2010 when Andrew Hagen posted a time of 5h23m20sec. One year later, newcomer Andre Calitz beat Hagen, bettering the record by nearly 16 minutes, and set an astonishing new mark in 2012 with a winning time of 4h50m21s.

Three Peaks is a 2017 German-Italian drama film directed by Jan Zabeil. It was screened in the Special Presentations section at the 2017 Toronto International Film Festival.

The 5 Peaks Challenge is a hill climbing challenge the aim of which is to ascend and descend the highest peak in each of England, Northern Ireland, Scotland and Wales and the Republic of Ireland within 48 hours, including all travelling, and without breaking national speed limits or recommended driving times. It is an extension of the National Three Peaks Challenge, which includes the highest peaks in England, Scotland and Wales. 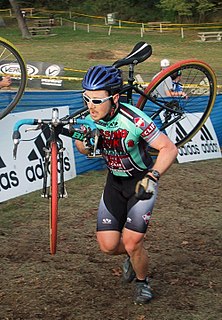 Cyclo-cross is a form of bicycle racing. Races typically take place in the autumn and winter, and consist of many laps of a short course featuring pavement, wooded trails, grass, steep hills and obstacles requiring the rider to quickly dismount, carry the bike while navigating the obstruction and remount. Races for senior categories are generally between 30 minutes and an hour long, with the distance varying depending on the ground conditions. The sport is strongest in the traditional road cycling countries such as Belgium, France and the Netherlands.

Fell running, also sometimes known as hill running is the sport of running and racing, off road, over upland country where the gradient climbed is a significant component of the difficulty. The name arises from the origins of the English sport on the fells of northern Britain, especially those in the Lake District. It has elements of trail running, cross country and mountain running, but is also distinct from those disciplines.

Thomas Frischknecht is a former Swiss mountain bike and cyclo-cross racer, often called Europe's Elder Statesman of mountain biking, because of his extraordinarily long career at the top level of the sport. A professional since 1990, he was on top of the Mountain Bike World Championship podium for the first time in 1996 and most recently in 2004.

Katie Compton is an American bicycle racer. She specializes in cyclo-cross racing and is a 15-time national champion. Compton formerly piloted a tandem with a blind partner in Paralympic events.

Pascal Richard is a French-speaking Swiss former racing cyclist. He is most notable as a former King of the Mountains winner at the Giro d'Italia and Olympic Games gold medalist. He was the Swiss National Road Race champion in 1989 and 1993.

Robert Jebb is an English fell runner, skyrunner, and cyclo-cross rider. He has won the annual Three Peaks Cyclo-Cross in the Yorkshire Dales a record ten times since 2000, is a four-time-winner of the Three Peaks Race in the same region and broke Catalan dominance in the Buff Skyrunner World Series when he became champion in 2005.

Eva Lechner is an Italian cyclo-cross, road bicycle racer and mountain bike racer who has won at least one national title in all three disciplines. She won the team relay at the 2012 Mountain bike World Championships together with Luca Braidot, Marco Aurelio Fontana and Beltain Schmid.

Cylance Pro Cycling is a professional women's cycling team based in the United States of America that started competing in elite women's road bicycle racing events, such as the UCI Women's World Tour, in 2016. The team's major sponsor, Cylance, is a high-tech computer security firm, and the team is owned by Inspire Sports whose founder, Omer Kem, previously managed BMW p/b Happy Tooth Dental and Bissell Pro Cycling.