Three Up, Two Down

Three Up, Two Down is a British sitcom starring Michael Elphick and Angela Thorne that ran from 1985 to 1989. It was written by Richard Ommanney.

Nick and Angie have just had a baby, and to help them financially they decide to rent out the basement. Both Nick's father, Sam Tyler, and Angie's mother, Daphne Trenchard, want the basement apartment and the only solution is to share. Sam is a Cockney, while Daphne is Cheltenham-bred and has not forgiven her daughter for marrying Nick, a 'common' photographer. Both Sam and Daphne are widowed, and stubborn. There is mutual contempt between Nick and Daphne: however, Angie is fond of Sam and is forever trying, against all the odds, to keep the peace between him and Daphne. The situation is exacerbated, from Series Two onwards, by the presence of Sam's gloomy and pessimistic zoo-keeper friend Wilf Perkins, who, after being thrown out by his mother, ends up having to share Sam's room, much to Daphne's icy displeasure. Further complications arise through Daphne's brief and disastrous romance with a neighbour, the suave and crooked Major Giles Bradshaw, who is eventually sent to prison for acts of theft and fraud.

The comedy came from the clashes between Sam and Daphne, and the eventual romance that develops between them. The next-door neighbour, Rhonda, was a catalyst for bringing them together.

The pilot for an American adaptation of Three Up, Two Down, titled 5 Up, 2 Down, aired on 5 June 1991 on CBS, but was not picked up as a series. Nick and Angie were played by Jeffrey D. Sams and Jackie Mari Roberts, and Angie had given birth to triplets. Sam and Daphne were played by Cleavon Little and Emily Yancy.

VHS and DVD box sets of the first two series were released on Universal Pictures' Playback imprint in the UK on 17 May 2004. As of 2020, Series 3 and 4 still remain unreleased.

The Beretta Cheetah, also known by its original model name of "Series 81", is a line of compact blowback operated semi-automatic pistols designed and manufactured by Beretta of Italy. They were introduced in 1976 and include models in .32 ACP, .380 ACP and .22 LR. Beretta still manufactures the Cheetah in Italy with limited imports to the U.S. each year.

Born and Bred was a light-hearted British comedy drama series that aired on BBC One from 21 April 2002 to 3 August 2005. Created by Chris Chibnall and Nigel McCrery, Born and Bred's cast was led by James Bolam and Michael French, who play a father and son who run a cottage hospital in Ormston, a fictional Lancashire village in the 1950s. Bolam and French's characters are later replaced by characters played by Richard Wilson and Oliver Milburn.

Lysette Anne Chodzko, known professionally as Lysette Anthony, is an English actress and model. She is known for her roles in the film Husbands and Wives (1992), the first season of the ITV comedy-drama series Auf Wiedersehen, Pet, the BBC One sitcom Three Up, Two Down, and her role as Marnie Nightingale in the Channel 4 soap opera Hollyoaks.

Sporting Club JuveCaserta, also known as Decò Caserta after its title sponsor, is an Italian professional basketball team based in Caserta, Campania. The team currently plays in the Serie A2, the second tier of Italian basketball.

"Boom Crunch" is the 121st episode of the ABC television series, Desperate Housewives. It is the tenth episode of the show's sixth season and was broadcast on December 6, 2009. 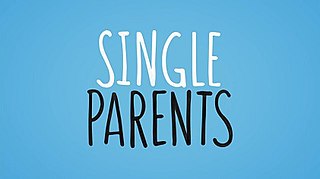 Single Parents is an American sitcom television series that stars Taran Killam, Leighton Meester, Kimrie Lewis, Brad Garrett, Jake Choi, Marlow Barkley, Tyler Wladis, Devin Trey Campbell, Mia Allan, and Ella Allan. It follows a group of adults who must venture through single parenthood with their young kids. The series premiered on September 26, 2018 on ABC and had a full 23-episode first season. ABC renewed the series for a second season, which premiered on September 25, 2019. In May 2020, the series was canceled after two seasons.

The Kids Are Alright is an American sitcom television series created by Tim Doyle for ABC, inspired by Doyle's own childhood. The series is a single-camera comedy about an Irish Catholic family raising eight sons in suburban Los Angeles circa 1972, navigating the trials and tribulations of the era.