The three circle model can be applied to different research approaches and models of organizational culture.

This model represents the interaction between the managerial culture, the workplace culture and the surrounding culture.

Managerial culture is the values of the management, and its norms, practices and artifacts. The workplace culture is the work and behavior norms as perceived by the workers point of view. The surrounding culture stands for the local norms and practices which characterize a national culture/ religious culture etc. [1]

The diagram presents a partial overlapping between the three circles. One must keep in mind, the relations among the circles are dynamic and their borders depend on the situation being studied. The model is not an area model and doesn't intend to describe certain numeric relations. Its objective is to describe the terms in a schematic manner.

The first circle describes the managerial culture, which is often perceived as the organizational culture.

The common part of circles 1 and 2, designates areas of congruity and acceptance, or "devotion" in management parlance. The second circle also provides room for "countercultures" and for workers' subversion of managerial culture.

The third circle represents the surrounding local culture, whose values, norms, and socialization can influence both acceptance and resistance to the managerial culture. [2]

The three circles model is connected to some known theories in organizational sociology: [1]

Organizational culture encompasses values and behaviors that contribute to the unique social and psychological environment of a business. Dr. Elliott Jaques first introduced the concept of culture in the organizational context in his book The Changing Culture of a Factory in 1951. This was the published report of "a case study of developments in the social life of one industrial community between April, 1948 and November 1950". The "case" involved a publicly-held British company engaged principally in the manufacture, sale, and servicing of metal bearings. The study concerned itself with the description, analysis, and development of corporate group behaviours.

Organizational theory consists of many approaches to organizational analysis. "Organizations" are defined as social units of people that are structured and managed to meet a need, or to pursue collective goals. Theories of organizations include rational system perspective, division of labor, bureaucratic theory, and contingency theory.

Theory X and Theory Y are theories of human work motivation and management. They were created by Douglas McGregor while he was working at the MIT Sloan School of Management in the 1950s, and developed further in the 1960s. McGregor's work was rooted in motivation theory alongside the works of Abraham Maslow, who created the hierarchy of needs. The two theories proposed by McGregor describe contrasting models of workforce motivation applied by managers in human resource management, organizational behavior, organizational communication and organizational development. Theory X explains the importance of heightened supervision, external rewards, and penalties, while Theory Y highlights the motivating role of job satisfaction and encourages workers to approach tasks without direct supervision. Management use of Theory X and Theory Y can affect employee motivation and productivity in different ways, and managers may choose to implement strategies from both theories into their practices.

Power distance refers to the relationship between those in power and the subordinates in a society where lower ranking individuals depending on the high or low power distance culture react to that authority. The Power Distance Index is a tool to measure the acceptance of power established between the individuals with the greatest power and those with the least. This is an anthropology concept, used in cultural studies to understand the relationship between individuals with varying power, the effects, and the perceptions of those individuals. In these societies, power distance is divided into two categories that resembles that culture's power index. People in societies with a high power distance are more likely to be in accordance to a hierarchy where everybody has a place, and which needs no further justification. In this case, those in positions with great extent of power are respected and looked up to. In societies with a low power distance, individuals aim to distribute power equally. Without regards to the same level of respect of high-power distance cultures, additional justification is often query among those in low power distance societies. Research has also indicated that before any other relationships in a business can be established, a cross-cultural relationship must be created first. These are the interactions and feelings conveyed between people of different cultures.

A contingency theory is an organizational theory that claims that there is no best way to organize a corporation, to lead a company, or to make decisions. Instead, the optimal course of action is contingent (dependent) upon the internal and external situation. A contingent leader effectively applies their own style of leadership to the right situation. Contingent leaders are flexible in choosing and adapting to succinct strategies to suit change in situation at a particular period in time in the running of the organization.

Participatory management is the practice of empowering members of a group, such as employees of a company or citizens of a community, to participate in organizational decision making. It is used as an alternative to traditional vertical management structures, which has shown to be less effective as participants are growing less interested in their leader's expectations due to a lack of recognition of the participant's effort or opinion. 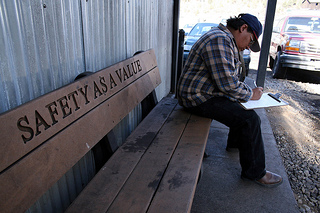 Safety culture is the collection of the beliefs, perceptions and values that employees share in relation to risks within an organization, such as a workplace or community. Safety culture is a part of organizational culture, and has been described in a variety of ways; notably the National Academies of Science and the Association of Land Grant and Public Universities have published summaries on this topic in 2014 and 2016. 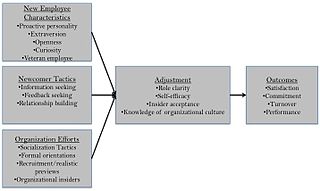 Onboarding, also known as organizational socialization, is management jargon first created in the 1970s that refers to the mechanism through which new employees acquire the necessary knowledge, skills, and behaviors in order to become effective organizational members and insiders.

The "business case for diversity" stems from the progression of the models of diversity within the workplace since the 1960s. The original model for diversity was situated around affirmative action drawing strength from the law and a need to comply with equal opportunity employment objectives implemented in the Civil Rights Act of 1964. Equal employment opportunity was centered around the idea that any individual academically or physically qualified for a specific job could strive for at obtaining the said job without being discriminated against based on identity. This compliance-based model gave rise to the idea that tokenism was the reason an individual was hired into a company when they differed from the dominant group. Dissatisfaction from minority groups eventually altered and/or raised the desire to achieve perfect employment opportunity in every job.

Counterproductive norms are group norms that prevent a group, organization, or other collective entities from performing or accomplishing its originally stated function by working oppositely to how they were initially intended. Group norms are typically enforced to facilitate group survival, to make group member behaviour predictable, to help avoid embarrassing interpersonal interactions, or to clarify distinctive aspects of the group’s identity. Counterproductive norms exist despite the fact that they cause opposite outcomes of the intended prosocial functions.

The unified theory of acceptance and use of technology (UTAUT) is a technology acceptance model formulated by Venkatesh and others in "User acceptance of information technology: Toward a unified view". The UTAUT aims to explain user intentions to use an information system and subsequent usage behavior. The theory holds that there are four key constructs: 1) performance expectancy, 2) effort expectancy, 3) social influence, and 4) facilitating conditions.

Ideal managerial climate (IMC) is a concept within organizational communication. Introduced by W. Charles Redding in 1972, this theoretical concept serves as a comprehensive model for management, and organizations as a whole, that places emphasis on relationships, interactions, and leadership functions. IMC furthers discussion in organizational communication beyond formal relations and structures, and assesses those characteristics that can produce the most ideal environment in an organization, and/or its management. This model presents an ideal situation rather than an attainable one, and should be a used as a tool for comparison, self-assessment, and improvement for organizations. 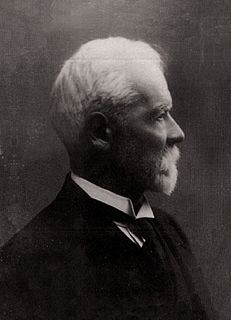 Fayolism was a theory of management that analyzed and synthesized the role of management in organizations, developed around 1900 by the French management theorist Henri Fayol (1841–1925). It was through Fayol's work as a philosopher of administration that he contributed most widely to the theory and practice of organizational management.

Workplace democracy is the application of democracy in various forms to the workplace.

Information culture is closely linked with Information Technology, Information Systems and the digital world. It is difficult to give one definition of Information Culture and many approaches exist.