Three From Galilee is the second novel in a trilogy by Marjorie Holmes based on the life of Jesus Christ. It begins three years after the birth of Jesus in Two from Galilee and continues through the start of his earthly ministry at age 30. The book was published in 1985.

The trilogy was highly popular. [1] 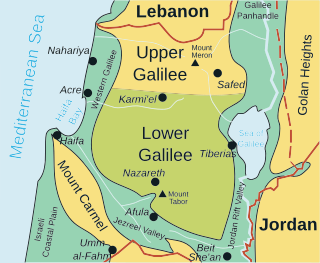 Galilee is a region located in northern Israel and southern Lebanon. Galilee traditionally refers to the mountainous part, divided into Upper Galilee and Lower Galilee.

Flavius Josephus was a first-century Romano-Jewish historian and military leader, best known for The Jewish War, who was born in Jerusalem—then part of Roman Judea—to a father of priestly descent and a mother who claimed royal ancestry. 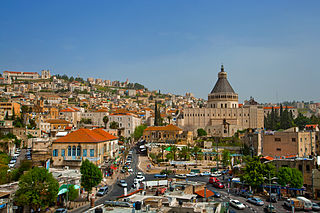 Nazareth is the largest city in the Northern District of Israel. Nazareth is known as "the Arab capital of Israel". In 2019 its population was 77,445. The inhabitants are predominantly Arab citizens of Israel, of whom 69% are Muslim and 30.9% Christian. Nof HaGalil, declared a separate city in June 1974, is built alongside old Nazareth, and had a Jewish population of 40,312 in 2014.

The Sea of Galilee, also called Lake Tiberias, Kinneret or Kinnereth, is a freshwater lake in Israel. It is the lowest freshwater lake on Earth and the second-lowest lake in the world, at levels between 215 metres (705 ft) and 209 metres (686 ft) below sea level. It is approximately 53 km (33 mi) in circumference, about 21 km (13 mi) long, and 13 km (8.1 mi) wide. Its area is 166.7 km2 (64.4 sq mi) at its fullest, and its maximum depth is approximately 43 metres (141 ft). The lake is fed partly by underground springs but its main source is the Jordan River, which flows through it from north to south and exits the lake at the Degania Dam. 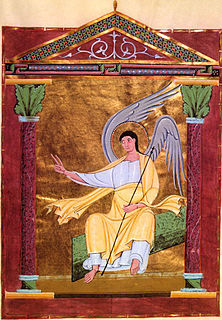 The empty tomb is the Christian tradition which tells that the women coming to the tomb of Jesus on the third day after his crucifixion found it empty. The story is found in all four canonical gospels, but beyond this basic outline they agree on little. However, the whole death, burial, and resurrection narrative predates the gospels and Paul's letters via oral traditions. The gospel authors' usage of standard literary, historical, and biographical compositional practices of their day along with their use of multiple sources account for much of the differences, which were usually over peripheral details.

Herod Antipas, was a 1st-century ruler of Galilee and Perea, who bore the title of tetrarch and is referred to as both "Herod the Tetrarch" and "King Herod" in the New Testament, although he never held the title of king. He was a son of Herod the Great and a grandson of Antipater the Idumaean. He is widely known today for accounts in the New Testament of his role in events that led to the executions of John the Baptist and Jesus of Nazareth.

The transformation of water into wine at the wedding at Cana is the first miracle attributed to Jesus in the Gospel of John. 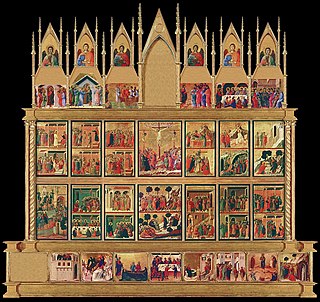 The life of Jesus in the New Testament is primarily outlined in the four canonical gospels, which includes his genealogy and nativity, public ministry, passion, prophecy, resurrection and ascension. Other parts of the New Testament – such as the Pauline epistles which were likely written within 20 to 30 years of each other, and which include references to key episodes in Jesus' life, such as the Last Supper, and the Acts of the Apostles, which includes more references to the Ascension episode than the canonical gospels - also expound upon the life of Jesus. In addition to these biblical texts, there are extra-biblical texts that Christians believe make reference to certain events in the life of Jesus, such as Josephus on Jesus and Tacitus on Christ.

Bethsaida, also known as Julias, is a place mentioned in the New Testament. Julias lay in an administrative district known as Gaulonitis. Historians have suggested that the name is also referenced in rabbinic literature under the epithet Ṣaidan.

Matthew 4 is the fourth chapter of the Gospel of Matthew in the New Testament of Christian Bible. Many translations of the gospel and biblical commentaries separate the first section of chapter 4 from the remaining sections, which deal with Jesus' first public preaching and the gathering of his first disciples.

John 4 is the fourth chapter of the Gospel of John in the New Testament of the Christian Bible. The major part of this chapter recalls Jesus' interaction with the Samaritan woman at the well. 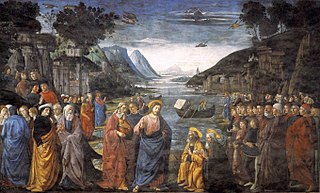 In the Christian gospels, the ministry of Jesus begins with his baptism in the countryside of Roman Judea and Transjordan, near the river Jordan by John the Baptist, and ends in Jerusalem, following the Last Supper with his disciples. The Gospel of Luke states that Jesus was "about 30 years of age" at the start of his ministry. A chronology of Jesus typically has the date of the start of his ministry, 11 September 26 AD, others have estimated at around AD 27–29 and the end in the range AD 30–36.

Matthew 15 is the fifteenth chapter in the Gospel of Matthew in the New Testament section of the Christian Bible. It concludes the narrative about Jesus' ministry in Galilee and can be divided into the following subsections:

John 7 is the seventh chapter of the Gospel of John in the New Testament of the Christian Bible. It recounts Jesus' visit to Jerusalem for the feast of Tabernacles, the possibility of his arrest and debate as to whether he is the Messiah. The author of the book containing this chapter is anonymous, but early Christian tradition uniformly affirmed that John composed this Gospel. Alfred Plummer, in the Cambridge Bible for Schools and Colleges, describes this chapter as "very important for the estimate of the fourth Gospel. In it the scene of the Messianic crisis shifts from Galilee to Jerusalem; and, as we should naturally expect, the crisis itself becomes hotter. The divisions, the doubts, the hopes, the jealousies, and the casuistry of the Jews are vividly portrayed." John 7:1 to 8:59 is sometimes referred to as the "Tabernacles Discourse". Raymond E. Brown describes the Tabernacles Discourse as "a polemic collection of what Jesus said in replies to attacks by the Jewish authorities on his claims". 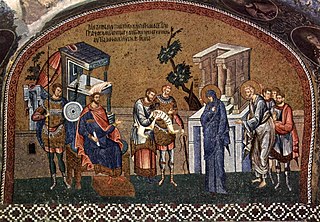 The Census of Quirinius was a census of Judea taken by Publius Sulpicius Quirinius, governor of Roman Syria, upon the imposition of direct Roman rule in 6 CE. The Gospel of Luke uses it to date the birth of Jesus, which the Gospel of Matthew places in the time of Herod the Great, who died in 4 BCE. Luke appears to have conflated Quirinius's census with the death of Herod, and most critical scholars acknowledge a confusion and misdating by Luke.

The Ancient Galilee Boat, also known as the Jesus Boat, is an ancient fishing boat from the 1st century AD, discovered in 1986 on the north-west shore of the Sea of Galilee in Israel. The remains of the boat, 27 feet long, 7.5 feet wide and with a maximum preserved height of 4.3 feet, first appeared during a drought, when the waters of the Sea receded. Other than the dating, there is no evidence connecting the boat to Jesus or his disciples. 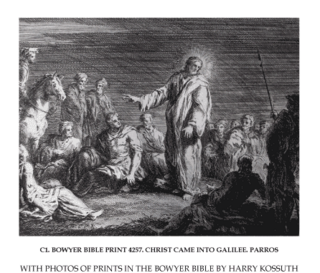 Marjorie Holmes (1910–2002) was an American columnist and best-selling Christian author of 134 books, 32 of which were best sellers. Holmes is known best for her biblical trilogy which began with the novel Two From Galilee, a love story about Mary and Joseph, published by Fleming H. Revell.

Two From Galilee is the first novel in a trilogy by Marjorie Holmes based on the life of Jesus Christ. The book was published in 1972.

The Messiah is the third novel in a trilogy by Marjorie Holmes based on the life of Jesus Christ. The story continues where Three from Galilee left off, with Jesus ready to begin his earthly ministry as the Messiah. The book was published in 1987.